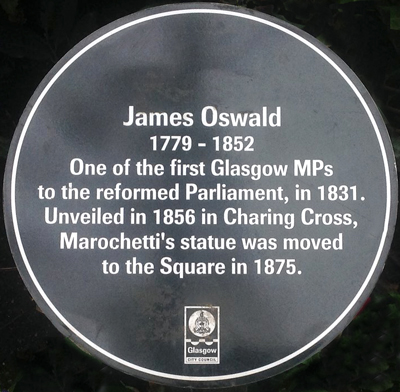 STATUES in Glasgow’s George Square have been under close scrutiny because of possible slavery connections . . . but that was not a problem for one in a prime site which is of a Loch Longside laird.

James Oswald MP, who also had a Clyde paddle steamer named after him, was the laird of the Gortan estate at Glen Douglas.

The estate is of further interest as during the time of the Oswalds, it was the birthplace of John Dewar, one of Scotland’s most acclaimed collectors of Gaelic folk tales.

The lands of Gortan can also lay claim to having played a pivotal role in helping to bring closure to the deadly blood feud between the Colquhoun and McFarlane clan chiefs.

The Oswalds were a family of wealthy Glasgow merchants, well established in the city before the middle of the 18th century.

One of them, Alexander Oswald (1738-1813), the father of James, had varied business interests, domestic and overseas. It was he who began the link with Gortan.

The book ‘The Old Country Houses of the Old Glasgow Gentry’, by John Guthrie Smith (1870) said of him: “He was a shrewd and enterprising man of business, and he was engaged in various undertakings besides his own foreign trade.

“He was a partner in the South Sugar House Company. He became sole proprietor of Ure’s ‘Great Work’ for the making of ropes, and he was an early and successful investor in building ground.”

The very mention of the word “sugar” at that period immediately conjures up visions of possible slavery and human exploitation.

However, the book goes on to state: “But from the main business of the day he held aloof. He had tempting West Indian offers, but he refused them all. He would not, directly or indirectly, mix himself up with slavery.”

Alexander took a keen interest in the Andersonian University, and he was one of the founders of the Royal Infirmary. Politically he was a staunch Whig, and favoured reform.

A further land purchase took place in 1798, when he bought Gortan, located beside Loch Long, and bounded on two sides by Glen Douglas and Glen Mallan.

In fact, the buying up of country estates formed an important line of business for others in the family as well.

Alexander and his wife, Margaret Dundas, had several children. Their eldest son was James who inherited the estate, following his father’s death in 1813, and who seems to have thought of parting with Gortan.

In a letter to an Andrew Mitchell in 1814, he wrote: “The Farm extends to 3 or 3½ miles. The land is dry, with good pasture and some heath. I do not know how many acres could be made arable. The pasture comprises 320 acres or so.

“I have been proprietor for 12-13 years. There are some cattle and some arable land. There are no leases. A house on the ground, which accommodates the herd and his family, was built a few years ago. The asking price is £4,000.”

In the event, no sale was concluded. The comment about “the herd and his family” is quite possibly a reference to the Dewar family, whose head, Alexander Dewar, worked on a farm there for possibly all of the period of Oswald ownership.

Although Gortan was not sold off at this stage, a sale did take place in 1829, the buyer being Sir James Colquhoun of Luss, who was the feudal superior.

The timing of the sale may reflect the fact that Oswald was becoming ever more involved in politics, in particular with the campaign to extend the franchise to vote. Like his father, he was a committed Whig.

In Smith’s book, the author comments: “James Oswald was an outspoken Liberal. He took a keen interest in the debates that preceded the Reform Bill of 1832, and he presided at the memorable meeting on Glasgow Green.”

The author goes on to stress that, notwithstanding his politics, Oswald was respected by all: “When party feeling ran highest, his private qualities made him liked by those who most disliked his politics.”

His commitment was such that he stood as a Whig in the General Election of 1832, and was returned as one of two MPs for Glasgow, the other being James Ewing of Strathleven.

The Reform Act of which he had been such a strong advocate was very successful in relative terms — in Scotland it increased the electorate from 5,000 to 65,000 out of a population of around two million, but universal suffrage was still a long way off.

It was written of Oswald as an MP: “He was a powerful orator, and was a steady, consistent and honourable man. He seldom troubled the House unless he had something particular to say.”

Mainly thanks to his commitment to extending the franchise, Oswald became one of the favourite sons of Glasgow. 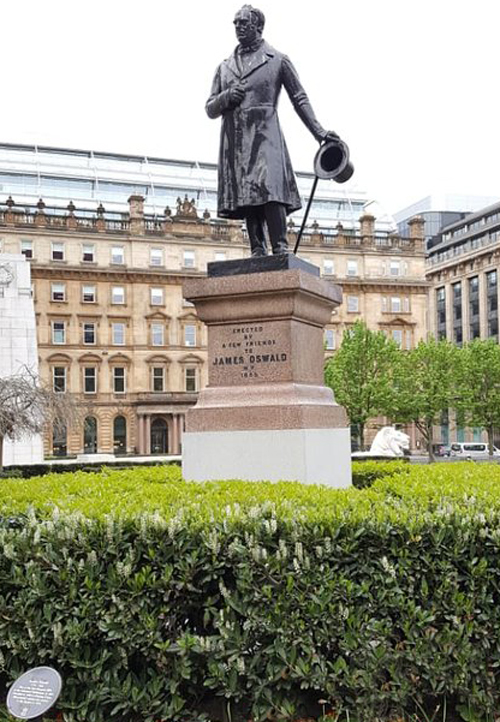 In 1856, friends and admirers commissioned a statue by Marochetti. Originally erected at Sandyford Place, just off Sauchiehall Street, it was moved to the north-east corner of George Square in 1875, partly to serve as a political foil to the statue of Sir Robert Peel, which had been there since 1859.

There Oswald still stands, gazing out in his frock coat, and holding his top hat and cane in one hand. With that knack possessed by Glaswegians to coin down-to-earth descriptions, the statue became known simply as ‘the man with the hat’.

The upturned hat created a challenge for many small boys, who vied to land a stone in it, which leads to the unlikely sounding story that no less than Joseph Conrad was challenged by Neil Munro to do exactly that, in order to qualify as “an honorary Glaswegian”.

After several attempts, Conrad succeeded. The story is true, and is recounted in Lesley Lendrum’s biography of Munro, who was her grandfather.

The episode took place in September 1898, when the two great writers dined together at the North British Hotel on the north side of George Square.

Munro described Conrad as “like a ship’s officer in shore clothes”. That was some 20 years before Munro took up residence in a Helensburgh seafront mansion, Cromalt.

A further tribute to Oswald came when a Clyde paddle steamer was named in his honour.

Launched in 1834 from the yard of Scott’s of Bowling, the James Oswald was soon placed on the Glasgow to Garelochhead daily run. Her master, Stewart Boyd, lived in the village.

Yet another reminder of Oswald comes through two Glasgow streets named after him. There is an Oswald Street next to Central Station, but the name is said to date from 1817, before Oswald came to public attention, and is attributed to this being the western boundary of property he owned there, rather than a mark of honour.

There is, or was, also an Oswald Street in Bridgeton — the name does not feature on modern maps. Once again, the name is said to have derived from the proximity of property owned by him, in particular the Barrowfield Spinning Factory.

This was in fact a cotton mill, which could raise suspicions of a possible indirect link with slavery. It may help explain the inclusion of Oswald Street in a list of Glasgow streets targeted by a pressure group seeking name changes because of alleged links with slavery.

Is there any other evidence linking James Oswald with slavery? The authoritative listings of the Slavery Compensation Commission, now available online, do not include his name, although that in itself does not disprove a possible link.

One name that does appear, however, is that of his cousin, Richard Alexander Oswald, who died in 1841, and who bequeathed to James several country estates he owned, including Auchincruive in Ayrshire.

The listing also includes a James Oswald MP, but he was from an earlier period. He represented Fife seats in Parliament.