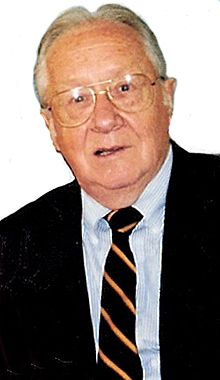 A RETIRED American Ambassador from the Cold War era who lives in Helensburgh was interviewed about his colourful career on successive Sundays on BBC Radio Scotland’s ‘Good Morning Scotland’ programme.

Francis J.Meehan, who is 93, spoke to Bill Whitelaw about life in America's Foreign Service.

Frank was born in East Orange, New Jersey, of Scottish parents, but his mother was homesick in the States and they returned home to Dalmuir where he was brought up.

His career in the US diplomatic service saw him ultimately appointed as Ambassador to Communist East Germany in the 1980s.

Twenty years before that Frank played a key role in the swapping of a Soviet spy for the pilot of a U2 spy plane, Gary Powers, which was the basis for the Hollywood blockbuster ‘Bridge of Spies’ starring Tom Hanks.

Frank, who in a talk to Helensburgh Rotary Club several years ago described himself as ‘a regular Cold Warrior of the Old School’, told the BBC: “Yes, I was involved in the exchange.

“I had just been transferred from our Embassy in Moscow, where I had been for a couple of years, to Berlin in late 1961. It all had to be handled carefully and sensitively.”

An American citizen by birth, Frank went to St Stephen’s Primary School in Dalmuir and St Patrick’s High School in Dumbarton, then graduated with an honours MA in history from the University of Glasgow.

He took up a sub-editing post with the then Glasgow Herald. Later he was awarded an LLD (Hon) from Glasgow.

“I went up to Glasgow University to do Modern Languages, which was French and German, and then I switched for my honours course to history,” he said.

“It was a conscious decision to take the American option, which I did. I registered for the draft as American citizens had to.

“Eventually I got my draft papers and took my medical examination in an American army hospital in Glasgow.”

He was sent to Fontainebleau in France to complete his infantry training, then served in Germany.

“That’s where the diplomatic bit started. It started in a very odd way, a funny way really,” he said.

“I was going back to my unit which was stationed north of Frankfurt, and I was in the American Army Red Cross Club, where you could have coffee and doughnuts, waiting for my train. I picked up a paper and read an article about a search for applicants for entry to the Foreign Service.

“So I took the exam. which was written and was my first encounter with multiple choice answers. I passed it — not very well. I just sort of scraped through.

However he was not given the job as he had not lived in the States for long enough, so he accepted an offer from a member of the interviewing panel to find him a job if he went to the States to work.

Frank took up this kind offer, and worked in Washington for two years before taking took the oral exam again.

In 1949 he married Yoker-born Margaret Kearns — who was evacuated to the Charles Rennie Mackintosh mansion Hill House in Helensburgh after the Clydebank Blitz in March 1941 — in Manhattan, New York.

Frank was evacuated from Dalmuir to Dumbarton and was a regular visitor to the Kearns household before Margaret went to the States in 1948 and worked as a nanny.

He entered the US Foreign Service in 1951 and was appointed to be a clerk in the American Consulate in Bremen and a junior officer in the Marshall Plan Administration.

He graduated Master in Public Administration from Harvard University in 1957 and rose through the ranks of the US Foreign Service, specialising in Eastern European and Communist affairs.

His diplomatic postings included Hungary, where the Meehans were friends of Cardinal József Mindszenty (pictured left with Mrs Meehan), who for five decades personified uncompromising opposition to fascism and communism in Hungary and spent eight years in prison before being freed in the Hungarian Revolution of 1956 and granted political asylum by the United States embassy in Budapest, where he lived for the next 15 years.

Frank served in Moscow in the aftermath of the U2 spy plane incident in 1960; East Germany when spies were being swapped prior to the collapse of the Berlin Wall; and Warsaw, when the Solidarity trade union emerged under Lech Walesa and General Jaruzelski declared martial law.

Margaret was a great support to him as he rose to become the US ambassador in Czechoslovakia, East Germany and Poland, her considerable skills as an organiser and hostess at receptions and dinners becoming legendary.

Frank said: “She was a terrific organiser and cook. They say that moving house is one of the most stressful things a person can do , but Margaret took it all in her stride as we moved from house to house a remarkable 23 times.” 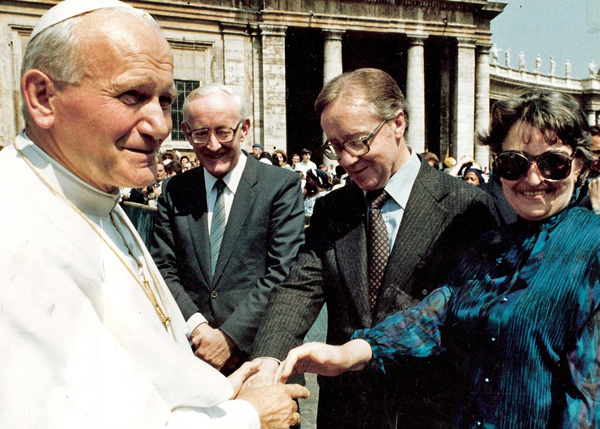 The couple met world leaders and plenipotentiaries and travelled to many official engagements, including a meeting with Pope John Paul II in Vatican City (pictured right).

Mrs Meehan was renowned for her sense of humour and left a lasting impression on the many American and foreign diplomats and dignitaries whom she met in the embassies in Prague, Warsaw and Berlin between 1979 and 1989.

She loved ballet, music, reading, flowers and sewing, and became actively engaged with the interior design of some of the embassies in which her family lived.

All the while she was involved in bringing up and overseeing the education of their four children — Anne, Catherine, Frances and Jim — who in turn helped look after her when she suffered ill health in later years.

She died on March 15 2015 at the age of 92, and the Requiem Mass at St Joseph’s Church in Helensburgh was followed by committal at Cardross Cemetery.

She was survived by her husband of 66 years, who still lives in the Kidston area, their children, seven grandchildren and three great grandchildren.

■ Some of the information in this article came from an obituary for Margaret Meehan written by Dumbarton journalist Bill Heaney.

The story of Frank Meehan’s adventures and the impact of the Blitz in Dumbarton and Cardross are included in All Our Yesterdays, a new book by Bill published recently by Neetah Books of Alexandria.