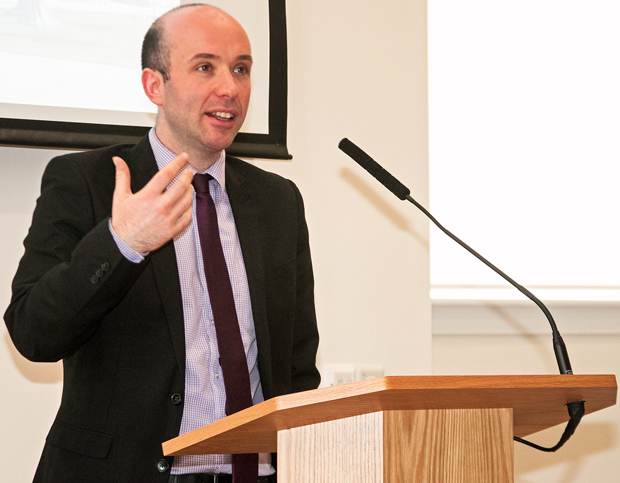 SCOTLAND’S Minister for Local Goverment and Community Empowerment, a guest at the opening of Helensburgh and Lomond Civic Centre on March 1 2016, surprised many with his local connections.

Marco Biagi MSP revealed that he was a former Hermitage Academy pupil and that his parents ran the Sun Chip Shop at the corner of East King Street and Sinclair Street for many years.

Marco, who lives in Edinburgh, is MSP for Edinburgh Central, and in November 2014 was appointed to his current role in the Scottish Government.

His family have lived in Dunbartonshire for several generations, and his parents moved from Dumbarton to Brooks Road in Cardross when he was six months-old. He went on to attend Cardross Primary School.

When he was eight, the family moved to East Montrose Street in Helensburgh. He was a Hermitage Academy pupil until 2000, when he went to St Andrews University.

His father owned and ran The Sun Restaurant as the family business through the 1990s, having previously owned chip shops in Dumbarton and Cardross. His parents still live in Cove, though they have both retired.

Marco was in the Cardross Cubs for a few years, and also was a member of a karate club based at St Columba Church Hall and a wargaming club in Churchill.

He joined the Helensburgh branch of the SNP when Councillor Richard Trail was the treasurer.

He said: “The first elected post I ever held was on Helensburgh Community Council — appropriate since I'm now Minister for Local Government.

“Back then it had opened up its membership to two 16-18 year-olds each year, and I served on it for a year.”

Marco studied international relations at St Andrews, and in 2002 was elected to take a one-year sabbatical from study to serve as a vice-president of the Students Association.

In that year he also managed the unsuccessful campaign of author and academic Germaine Greer for election to the post of Rector.

He graduated with first class honours in 2005, then began postgraduate study at Wadham College at Oxford University, but subsequently left and came back to Scotland. He also studied at California Berkeley University.

In 2007 he began working for new MSP Keith Brown — now Cabinet Secretary for Infrastructure, Investment and Cities — and moved to the SNP central staff in a senior research post in 2009.

After studying part-time for two years while working, he completed a Master's degree at Glasgow University in 2010.

He won the Edinburgh Central seat in the 2011 Scottish Parliament elections, defeating prominent Labour incumbent Sarah Boyack by the narrow margin of 237 votes but achieving only the second lowest share of the vote of any successful SNP constituency candidate.

He is thought to be the youngest person to have won election to the Scottish Parliament in a constituency seat, and when he was sworn in as an MSP he took the oath in English and Italian.

His maiden speech was in praise of renewable energy on June 2 2011, before staging the first Member's Debate of the parliamentary term six days later in support of the campaign for the UK Green Investment Bank to be situated in Edinburgh.

Although the campaign was successful, Marco adopted a more critical stance when it emerged that the majority of staff were based in London rather than his constituency.

A persistent critic of the controversial Edinburgh tram project, he described as "an overpriced downgrade" after suggestions that it would have a longer journey time than the existing airport bus.

He supported the retention of the SNP's policy of non-NATO membership in 2012, a stance which the deputy leader of the Scottish Conservatives suggested resulted in him being passed over for promotion as a Minister that autumn.

After Jean Urquhart resigned from the SNP over the NATO policy change Marco replaced her as deputy convener of the Scottish Parliament's Equal Opportunities Committee in October 2012.

In 2013 he proposed amendments to the Post-16 Education (Scotland) Bill to create duties on agencies, including the Scottish Funding Council, to support widening access to further and higher education.

Shortly afterwards he was elected honorary president of the Federation of Student Nationalists.

In 2014 he was named on the inaugural ‘Scotland on Sunday’ Pink List of 50 influential LGBT Scots for his contributions in support of the passage of Scotland's same-sex marriage bill.

Last February he was appointed co-chair of the Commission on Local Tax Reform — a cross-party group set up by the Scottish Government, tasked with examining alternatives to the Council Tax.

At the Civic Centre opening Marco welcomed the success of the ambitious project.

He said: “The centre is an example and lesson for others in dealing constructively with older buildings, and in putting people at the heart of developments.

“It brings a number of council services together in one place. It looks stunning. It’s a gem.”