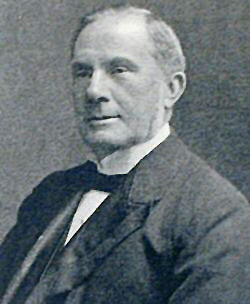 Born in Glasgow on May 18 1837, the eldest son of Robert Tatlock, a hat manufacturer, he was educated at the city’s Greyfriars Church School and the Trades House School before studying chemistry at Anderson’s University, now Strathclyde.

From 1857-67 he was chief assistant to Professor Frederick Penny at Anderson’s University, and in 1867, now resident at Kilarden, Rosneath, he was elected a Fellow of the Chemical Society in London.

Next came a year as chemist at Kames Gunpowder Company in the Kyles of Bute, and then he began his own consulting business in a laboratory in George Street, Glasgow, also serving from 1873-84 as a lecturer on chemistry at the Glasgow Mechanics Institution.

He married the first of his three wives, photographer Agnes Jardine, in the city in 1869. His second wife was Christian Aitken, and in 1898 he married widow Belle Ross in Stirling when he was 61 and she was 40.

While assistant to Professor Penny he personally analysed all the hundred productions in the famous trial of Dr Edward William Pritchard for murder in 1865.

Pritchard, a medical practitioner, was found guilty of the killing, by poisoning with aconite and antimony, of his wife and of his mother-in-law, and he was the last man to be publically hanged in Glasgow. Professor Rattray was the author of numerous papers on scientific and chemical subjects, containing the results of his investigations, which were published in various journals and magazines, and some of them are still relevant today.

One of his pupils who became famous was Sir William Ramsay, who later wrote: “Mr Tatlock was, and is, an eminent analytical chemist and during the year I had with him I had a course of qualitative analysis and got through a good part of quantitative analysis.”

In 1877 Tatlock joined in partnership with Dr William Wallace and Dr John Clark, both of them eminent analysts, and they practised under the name of Wallace, Tatlock and Clark.

John Clark, also a pupil of Penny, was the predecessor to Tatlock as President of the Society of Public Analysts.

They proved to be a very strong combination, practically monopolising all the analytical work needed in Glasgow — and were jocularly known locally as the “Chemical Trinity”.

In 1877 Robert Tatlock was, along with his partners, appointed Public Analyst for Glasgow, and he held that post until his death.

He also held similar appointments for Perth, Dumbarton and Stirling, and a total of 15 Scottish burghs, playing a major role in developing legislation to protect public health.

In 1888 the partnership was dissolved and Tatlock joined with Dr J.B.Readman, a well known Edinburgh analyst, to form a new firm, R.R.Tatlock and Readman. The following year he was appointed Sewage Analyst to Glasgow Corporation.

In 1891, he and his nephew Robert Tatlock Thomson, founded the partnership of Tatlock and Thomson, Analytical and Consulting Chemists in Bath Street, Glasgow. The firm is still in business today.

Around this time a major dispute broke out between the malt and grain distillers over the definition of what was true Scotch Whisky. This dispute came to a head with the formation of the 1908 Royal Commission, to which Tatlock gave evidence.

Having initially been consulted by the Glasgow Wine, Spirit, and Beer Trade Association, he had written in 1898 that there was no legal definition of whisky, and he was called as an expert witness, on the side of the grain distillers.

The Commission decided to duck the issue of a minimum maturation period — the malt distillers had demanded two years — and declined to set a minimum malt content.

It found in July 1909 that "Whiskey is a spirit obtained from a wash saccharified by the diastase of malt and that Scotch Whiskey is a whiskey as above if distilled in Scotland".

These findings determined the definition of Scotch Whisky which in essence persists to this day.

In 1915, Lloyd George introduced the compulsory bonding of spirits for a minimum period of three years on the basis that 'Drink was doing more damage in the war than all the German submarines put together'.

Much of the work undertaken today by Tatlock & Thomson continues the founder’s pioneering efforts in maintaining the integrity of whisky as it has evolved into one of the world’s great drinks.

Since 1994, the firm has been based in the Old Corn Exchange in Inverkeithing, Fife, and is headed by Dr Harry Riffkin.

In 1896 Professor Tatlock was requested to go to South Africa to give expert evidence in favour of the patentees, McArthur and Forrest, in the case brought by the Chamber of Mines to break their patent concerning the extraction of gold from ores and mine tailings with potassium cyanide.

However he did not give evidence, and the Chamber won the day. While he was there he was also involved in an Inquiry by the Transvaal Government into the cause of the explosion of 50 tons of dynamite at Johannesburg.

In 1901 he held a patent, jointly with James Graham, on “Improved Automatic Self-inflating Life Belt, Garment or Appliance”.

Professor Tatlock was said to display ‘the courtly manners of a true gentleman’, and within and outside his profession he was excellent company, always having some good stories to tell.

Former and present students and assistants presented him with his portrait, painted by the William Stott of Oldham, as a mark of their appreciation of his work. It is now in the Strathclyde University collection.

A man of liberal principles, he took an interest in politics, music and literature. He was very fond of music, especially Scots songs, and in his earlier days an excellent violinist.

He died on December 22 1934 at age of 97 from shock following a fall and injury to his left hip at his then Helensburgh home, Woodside Cottage, 7 Sutherland Street.