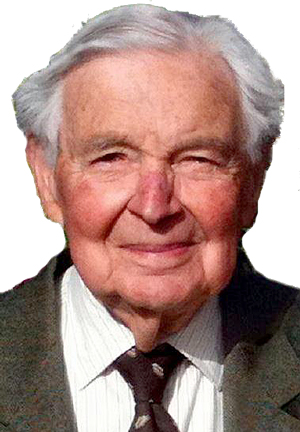 A HELENSBURGH man who had a colourful and highly successful career as a lawyer and in business also served with distinction during the Normandy Landings and the Clydebank Blitz.

He was a grandson of Sir James Lumsden, a wealthy stationer and publisher with banking and shipping interests and a former Lord Provost of Glasgow who was knighted after acting as host to the Prince and Princess of Wales during their visit to Glasgow to lay the foundation stone of the new University of Glasgow on Gilmorehill in 1868.

James, or Hamish as he was widely known, was born on January 24 1915 at Arden House, the family home on Loch Lomondside in 1915 to James Robert Lumsden, who was later knighted, and Henrietta Macfarlane Lumsden, nee Reid.

He was educated first by a governess and later at Miss Johnstone’s Prep School in Helensburgh before transferring to Cargilfield School in Edinburgh, where he was head boy until 1928 when he won a scholarship to Rugby School.

There he went on to win a further scholarship to Corpus Christi College, Cambridge. He was a member of the Officer Training Corps at Rugby, and while at home in Scotland he was an ardent member of the Scouts, becoming Assistant District Commissioner for Vale of Leven District.

Handsome, urbane and hugely intelligent, he studied Classics and Law at Cambridge and secured degrees in both, including a First Class Honours in Law for which he won the Bishop Green Cup in 1936 for one of the best degrees in the college, a BA which was converted in 1995 to MA.

At Cambridge and during holidays, Hamish enjoyed a full social life involving tennis, golf, dances, bridge and many house parties on the Bonnie Banks at Arden House and with other families, including the Cross family of Earlston, Borgue, Dumfries and Galloway, whose daughter, Sheila, he was later to marry.

He was a member of Prestwick Golf Club from 1936 and a good tennis player who played for the Corpus Christi team in inter-college matches and took part several times in the Gleneagles Hotel tournaments, winning the handicap singles on one occasion.

He completed his studies with an LLB postgraduate degree at the University of Glasgow while also working as a law apprentice with the firm of Mackenzie, Robertson and Company, where his great uncle, Robert Mackenzie of Caldarvan, had been a senior partner until his death in 1936.

His three-year law apprenticeship came to an end before the outbreak of the Second World War and his military service began when he joined the 74th Heavy Anti-Aircraft Regiment as a Second Lieutenant under Lieutenant Colonel John Spencer Muirhead and was assigned to 231 Battery.

After spells at Barrow Head and Tynemouth, he was mobilised ten days prior to the outbreak of war on September 2, 1939, and was deployed initially to cover the ICI Works at Mossend, Lanarkshire, and subsequently at vulnerable and important sites around the Clyde Basin, including the American Naval Base at Rosneath and Cardross.

He was posted as part of a cadre to train at Oswestry, where he was swiftly promoted to the rank of Captain before moving to Wick and from there, within just a few weeks, to Brigade Major in King’s Park, Glasgow.

While in this post at the headquarters of 42 AA Brigade, he was in charge of the Operations Room during two nights of the Clydebank Blitz in 1941. A year later, he was posted to Edinburgh, where he served as an Intelligence Officer before being transferred to Southampton to command the AA regiments deployed in that area to cover the Normandy Invasion, which took place in June, 1944.

He had later to deal with the VI flying bombs aimed at London and it was at that time he was awarded the MBE (Military Division).

Mr Lumsden was demobilised on his birthday on January 24, 1946, and spent some time relaxing and enjoying himself in London, where he visited the theatre and enjoyed some fine dining in the West End.

One year later, while on a ski-ing holiday in Davos, also on his birthday, he became engaged to Sheila Cross. They were married in Borgue Parish Church in June, 1947, and the wedding reception thereafter at Earlston was said to be 'magnificent'.

The couple’s honeymoon plans were hampered, however, by severe restrictions on foreign currency, and instead of going abroad they toured Scotland from Peebles to Fort Augustus and from Sutherland to Skye.

The Lumsdens went first to live at Arden House while their own home at Bannachra, near Helensburgh, was made ready for them, and it was there they had three sons, James, Ian and Michael, who survive them both.

Hamish Lumsden had a remarkable career in the law and in business. He became a partner in the renowned Glasgow law firm of Maclay Murray and Spens in 1947, spending the first month on a ski-ing holiday, which he had already arranged, in Arosa and Davos.

He stayed with the firm in which he became the senior partner until 1982 when he retired aged 67. A member of the Jenkins Committee on Company Law Reform in 1960, he was a Fellow of the Law Society of Scotland and of the Royal Faculty of Procurators, Glasgow. 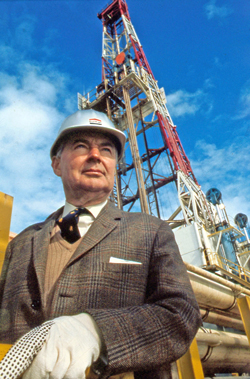 He held directorships and chairmanships of some of Scotland’s most notable companies, including the Scottish Union and National Insurance Company (later Norwich Union Fire Society), Burmah Oil, Bank of Scotland, Weir Group, William Baird Shipping, Scottish Provident Institution, Murray Johnstone and a number of companies in that group, giving them all up when he reached 70.

He was chairman of the General Commission of Income Tax for many years, a Deputy Lieutenant of Dunbartonshire from 1966, and a member of the Royal Company of Archers from 1963.

Hamish Lumsden was a popular figure in the community on Loch Lomondside. He was an elder and treasurer of Luss Parish Church, a member of Dumbarton Presbytery of the Church of Scotland, and Honorary President of the Dunbartonshire Conservative Association.

He was also the driving force behind the Dunbartonshire County Agricultural Show, where he was an enthusiastic MC on the megaphone and where his wife, Sheila, organised the Scottish Women’s Rural Institute stalls filled with beautiful craftwork and delicious home baking.

A large number of people attended a memorial service for Hamish Lumsden at Luss Parish Church on April 13, when his eldest son, James, paid tribute to his father’s life and work.