HELENSBURGH became a Royal Burgh with the right of local self-government in 1802 . . . but 173 years later it lost that right.

The Local Government (Scotland) Act 1973 ended the old system of local government, and two years later, in May 1975, an era with a character all of its own was over.

Helensburgh’s last Provost, Norman M.Glen, CBE, TD, MA, JP, (left) took the opportunity to look back and to record some of the outstanding events from the minutes of the Town Council in the form of a commemorative booklet.

It contained a wealth of information about the development of the burgh and the way it was done. Incidents — both amusing and serious — were recorded in a booklet which made good reading and provided food for thought about the future.

The first five years of Helensburgh’s life as a burgh remain cloaked in mystery. No records of town council proceedings have been found, and it seems likely that there was no council to record.

The first minute found in the burgh records bears the date September 12 1807, and records a meeting of feuars. Henry Bell was elected the first Provost, and two bailies and four councillors were elected to serve with him.

That original six were to set in motion the wheels of Helensburgh’s local government . . . wheels which never stopped turning, but occasionally required a little oiling.

In the early years the councillors indulged in a peculiar form of masochism. They and the feuars would meet once a year at 8 a.m. and then make their way along the Burgh Boundaries to ensure that the boundary stones, cut in wrought freestone, were still in their proper places. It is thought that at least two, marked B.B. 1816, are still in place to this day.

In the first twenty years the onerous duties specified for councillors included an annual election, drinking the King’s health on appropriate occasions, and fining those who refused to attend the Parish Church.

The biggest event of that period came at its end in 1822 when King George IV visited Edinburgh, and the councillors took it upon themselves to send a humble and dutiful address telling of their faithfulness to the King’s sacred person and throne.

The original Municipal Building was a theatre which the council took over when the theatrical funds ran out. For several decades they met in the converted orchestra pit and boxes. The ground floor which had been the stage became the police office with adjoining cells.

On Sundays the main part of the hall was used by religious groups who did not yet have a church. Once, as the preacher delivered the Holy Word with true and devout eloquence, his monologue was interrupted and stopped by a cry from the cells: “O! Will ye no let me oot; let me oot o’ this awfu’ pit. Will nane listen to me? O! Whit have I dune tae be cast inta darkness? Let me oot; let me oot.”

By 1835 the council began to widen its horizons. Expansion of the burgh had made it necessary to increase the then very limited road plan, and work was begun on extending Princes Street eastwards beyond Maitland Street.

The next year the council was forced to recognise that a need had arisen for streets to be named and numbered with signs, and a special committee was set up to raise the funds for the process.

In 1840 the council became concerned about the cleanliness and tidiness of the burgh streets, and a quaint motion was passed which stated that “it is hereby enacted that no dung or ashes are to be put out or allowed to remain on the streets after 8 o’clock a.m. from April 1st to 1st October or after 10 a.m. during the remainder of the year”.

The Helensburgh Joint Stock Gas and Light Company asked permission to lay gas pipes through the streets in 1844, but the burgh remained in the dark until almost exactly two years later when the council decided to seek estimates for 24 street lamps.

There was a period of further great concern about public health, and a committee was established to go over the streets and report on how many public drains would be needed to “make the streets in good condition and take off all stagnant waters so that the comfort of the inhabitants may be advanced, and any contagious disease caused thereby, prevented”.

But all these services had to be paid for, and the rates were fixed in 1847 at six pence in the pound for police and three pence in the pound for lighting. However there was one reprieve for the ratepayers — one penny was deducted from the lighting rate because the lights had not been erected by the time stated in the estimates the previous year.

Later that year George Maclachlan was appointed town clerk with a salary of £25 per annum. However he had some trouble starting his new job as the former clerk, John Black, refused for some time to hand over the minute book.

There are a number of minutes mentioning the desirability of forming a cemetery. The first indication of the choice of the present site, on Old Luss Road, is in the minutes of November 3 1849 when Councillor Smith reported that, in reference to a place of Sepulture, Councillor Hendry had, along with a labourer, examined the ground in the neighbourhood of Kirkmichael Farm.

Four years later the council was thrown into some confusion when it received a letter from James Smith of Jordanhill dated September 24 1853. The letter thanked the council for electing him Provost on September 9, and tendered his resignation, because he was intending to change his address.

The town water supply posed many problems, and in one minute it is recorded that a committee was appointed to inquire into the ‘propriety’ of applying to the Superior for a grant of land on the West Burn to form a reservoir to supply the town with water.

However, little progress was made, and three years later in 1859 a public meeting of inhabitants resolved that the future management of certain wells be committed to the Town Council.

Progress over the water supply was very slow, and it was not until 1867 that the subject of a reservoir at Ballyvoulin first came up. The new water supply was eventually turned on by Mrs Breingan, wife of the Provost, in 1868, and it came from the Mains Hill reservoirs and filter works.

In 1860 a deputation headed by the Rev John Bell visited the council and reported that a public meeting had resulted in a resolution being made calling for the ‘judicious’ planting of trees in the streets. The council promised co-operation.

In 1872 the monument to Henry Bell was erected in West Clyde Street, and in 1873 the council strongly opposed the proposal by the North British Railway to build a pier at Drumfork (now Craigendoran).

Plans for the new Municipal Buildings were approved in 1878, the buildings were added to in 1905, and the Victoria Hall was built in 1888, all by public subscription.

Around that time, progress really began to take a hold in Helensburgh. The West Highland Railway was built, a speed limit of 12 m.p.h. was imposed on light locomotives on the highways, electricity arrived and was opposed, and a resolution was passed opposing the principle of one local rate in each area — and any powers for County Councils to collect rates in Police Burghs.

In 1919 the first municipal housing scheme was begun, and, although the telephone had been introduced in 1886, the first public kiosk was not erected until 1927.

The outdoor swimming pool, built in 1929, was paid for by Andrew Buchanan, who was later to become Provost and was responsible for many generous donations to the town. 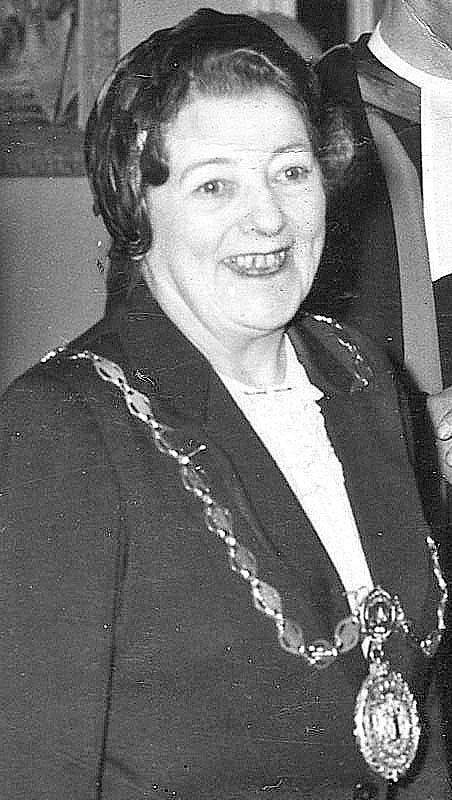 Helensburgh’s first and only lady Provost was Miss Janet R.Young (left), who became Provost in 1958 and served until 1961.

Another first and only was the burgh’s honorary Burgess, ex-councillor Alastair H.Paterson, who was awarded the Freedom of the Burgh in 1968, but died seven weeks later.

In its final years the council completed a major housing development in Maitland Street, introduced a new sewage scheme, completed a recreation ground in Kirkmichael, and built a new sports pavilion at East King Street Park.

The end in May 1975 was marked with a Civic Week, which was opened by ex-Provost Janet Young at a civic reception in the flag-bedecked Municipal Buildings.

Provost Glen commented: “This is a moment of sadness for many of us, but it is a moment of pride also in the achievements of the Town Council in the last 173 years.”

Ex-Provost Young said: “I confess that to me this is an occasion of sadness. The old order changeth, yielding place to new. It is true that we live in a time of change, but whether this is for the better or not is a matter for opinion.”

During the week each council department mounted static exhibitions in their own offices, an exhibition of works of art associated with Helensburgh and a children’s art exhibition were held in the Victoria Hall, and there was a display of old maps in the Templeton Library in John Street.

A Kirking of the Council took place at Old and St Andrew’s Church (now the West Kirk), a tour of places of architectural or historic interest was arranged, there were discos and various sporting events including a revival of Helensburgh Highland Games, and a finale concert in the Victoria Hall and a bonfire and firework display brought a spectacular end to a memorable week and an era of local government.

In a final public message, Provost Glen wrote: “An outstanding but common factor in all the council minutes throughout more than one and a half centuries is the theme of great caution in accepting radical change.

“Although slow to accept modern improvement and progress, it should be realised that the motives that moved the civic fathers of long ago certainly included a desire to preserve the essential natural beauty of the town and an unwillingness to dig up the streets or to destroy the rural surroundings.

“Much of the beauty of this unique town is due to the foresight and determination of councillors who have handed on to their successors a Helensburgh of trees, grass verges, carefully planned roads, modern but tasteful lighting, and adequate water and sewage systems.”

On his final day in office Provost Glen, who went on to serve with distinction on Dumbarton District Council, said: “I am terribly sad that the Town Council is ceasing to exist. I really feel that the burgh is losing something which is not being replaced in the way I would like to see it.”