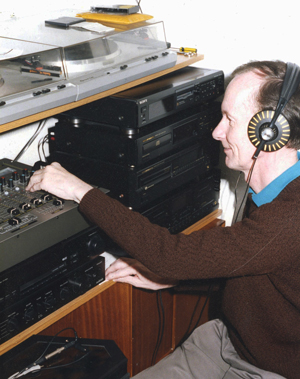 It is the longest registered Scottish member of the Talking Newspaper Association of the United Kingdom, pipping one Dunfermline Sound by a few weeks, and when it was first thought of in the autumn of 1975, it never occurred to those early enthusiasts that they were starting a local institution.

After a dummy run in December of that year, the first half-hour monthly tape was issued in January 1976, and Headline Helensburgh was in business.

Little did the team — some of them still connected with the organisation — realise that they would be working, month in, month out, for years to come, and that today, the now hour-long twice a month tapes would mean so much to so many.

So how did all this begin? Really, as a result of an astonishing coincidence.

In 1975 there was in existence in West Dunbartonshire a Government-backed project called "The Quality of Life Experiment", the idea of which was to discover whether, by injecting a certain amount of cash and some paid and trained activists, a community could be encouraged to develop and improve its own quality of life.

West Dunbartonshire was one of three areas of Britain chosen for the experiment, the others being in England and Wales. Locally, it is best remembered, often with a smile, for some of the more hare-brained schemes put. But that is perhaps a little unfair.

It had an initiating role: to persuade other people to get projects off the ground, and then back away. Few of the projects which the Experiment initiated stayed alive and flourishing for more than a few years, Headline Helensburgh being the exception. However the Experiment was by no means a failure, although it was not pursued in any formal way by the Government.

One of the things the Experiment did locally in its very early days was to conduct a survey of the elderly, the blind, the handicapped, and those who lived alone. This project produced a mass of useful information, and directly led to the formation of Headline Helensburgh.

They discovered, amongst many other things, that those who were unable to read for any reason missed local news and gossip very badly. They heard the national news on radio or TV, and often had relatives who would come in and read extracts of the daily papers to them.

But when friends called in and started talking about what was going on locally, they had no idea what they were talking about.

In other words, the place they were most interested in, their local area, they knew least about, and it was a gap they wished could be filled. The Quality of Life Experiment organisers were pondering what on earth they could do about this, when the coincidence happened.

One morning in the autumn of 1975 there was a knock on the door of the Quality of Life office in Helensburgh\s old Police station.

The Experiment\s public relations officer, Angela Levinson, answered the door and ushered into the office a wonderful burgh woman, widely respected in the town for good work in many areas, and widely known for her unusual name, the late Easter Daffodil Baird.

Mrs Baird explained to Angela that she had relatives in Wales whom she visited from time to time, and on her latest visit she had met someone who was running a new service for the blind, a talking newspaper. She herself already made tape recordings of stories for children and old people, and she asked if the Experiment people thought that it might be worth considering trying to establish a talking newspaper locally.

Of course indeed they did, and it was the answer to their problem. Angela put the idea to the co-ordinating committee which supervised the Experiment, and they backed it and agreed to supply some initial cash if the community could come up with a team to run it.

At Angela's request, the Helensburgh Advertiser ran a story, and the project so appealed to the reporter who wrote it, Mrs Fiona Howard, and the editor, Donald Fullarton, that they went to the interest meeting to see if their experience would be of use.

About a dozen people attended, and they included John and Peter Douglas, the twins from nearby Dumbarton who were mainstays of the Dumbarton District Hospital Broadcasting Service, Radio Lennox, and had their own recording studio at home.

Mrs Baird explained her idea, Angela explained how the Experiment could help, and the decision was taken to investigate the idea further. Several more meetings were held to iron out the details, and the team decided to have a go.

The Advertiser and the (now closed) Helensburgh & Gareloch Times agreed to allow items from both papers to be used. The Douglas twins offered the use of their studio. Mrs Baird, with her lovely lyrical voice, was an obvious choice to do the reading, and the rest of the team agreed — somewhat nervously — to have a go.

Mrs Howard and Mr Fullarton would use their newspaper knowledge to bring the contents together, cut the stories to a suitable length, and compile the programme. The Experiment had a list of potential recipients following their survey.

The next problem was — how to get it to the recipients? It was known that in England, where already existing talking newspapers dealt with very large numbers, cassettes could be posted to the blind, free of charge by courtesy of the Royal Mail, in special plastic envelopes, provided that they contained only news and not advertisements or music, other than to link segments.

But the original survey had shown that many of the recipients were lonely, and there was also the problem that many did not possess cassette players. So the postal system was rejected, one of the best decisions the team ever made.

It was decided instead to gather together a team of volunteer distributors, who would take the tape — and if necessary a recorder and even an adapter — to the recipient, and call back a few days later to collect it.

This meant that not only did the recipient receive the local news, they also had two visits a month. For many of them the visits have proved to be just as much highlights as the tape itself. The distributors became firm friends, and there is the additional advantage of regular feedback of information and suggestions.

From an initial ten recipients, and despite the obvious high turnover when dealing with mostly elderly people, there are now about seventy, statistically the sort of number to be expected in an area of the size and type of Helensburgh.

It is also played to groups of patients or residents in five old people's homes. About two dozen former local residents who have moved elsewhere have the tapes posted to them.

Most are found through word of mouth. Local doctors, district nurses and social workers are fully briefed about the service and often suggest new recipients, as do Argyll and Bute Council’s Sensory Impairment Team.

Headline Helensburgh is run by a committee, still chaired by Donald Fullarton, which meets as infrequently as possible. The members are divided into two groups which often overlap. 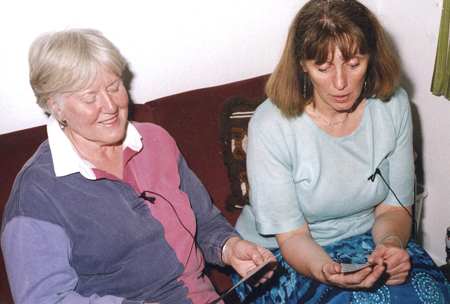 One group works two tapes a month, edited by Mr Fullarton, a second consists of the distributors, led by the distribution convener, Mrs Edith Benson. Recording is still done in the Douglas twins studio in Dumbarton, but the tapes are now distributed from Admin Systems Ltd. in West King Street.

The tapes contain largely local news, mixed with news of general interest to the blind and otherwise visually handicapped, historical features, sport, and a "Thought for the Month" supplied by local ministers in rotation.

They are straightforward, without ambitious interviews or special features, because that is what it has emerged the recipients prefer. From their comments the tapes are a lifeline to some recipients, much appreciated by others. No-one has ever asked to stop receiving it for other than medical reasons.

In the first few years Headline Helensburgh found that by direct appeal to such organisations as Old People's Welfare Committees, the Chamber of Commerce, Rotary, Lions and Round Table, and the Churches, enough money came in to meet ongoing expenses — such as tapes, servicing and buying recorders, and insurance.

When the time came when a high speed copier was required, these and many other local organisations — delighted to find a cause which was truly local — chipped in, and the members themselves undertook considerable fund-raising. Nowadays Headline Helensburgh is in a secure financial position, still helped by the community.

Headline Helensburgh has come a long way since that first idea in the autumn of 1975 and will undoubtedly develop further, moving probably from cassette to memory stick. It is a valuable service to the local community, it is enjoyed by its recipients, and to the team who produce it, it is, above all, fun.