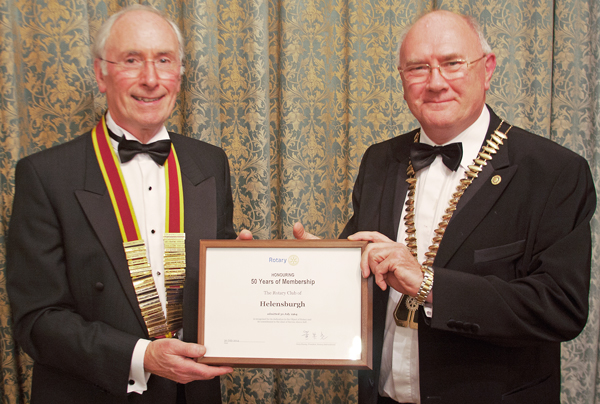 THE story of the Rotary Club of Helensburgh actually began in Bennetsville, South Carolina, in the United States, in the summer of 1963.

The Rev John Henry Dutch, minister of what was then Old & St Andrew’s Parish Church and is the now the West Kirk, was visiting the area and was invited to speak at the Rotary Club.

So impressed was he by the objects of Rotary and by the members he met that he was determined to bring Rotary to Helensburgh.

Such was his enthusiasm and personality that by April 17 1964 the District Extension Officer, David Findlay, was able to present 32 members at the Inaugural Meeting of the Interim Club. This was followed by the Charter Dinner, in the then Queen’s Hotel on East Clyde Street, on September 18 1964.

Throughout this period members of the parent club, Dumbarton, were of great assistance, conveying the warmth of Rotary International.

The club’s first project was a Christmas Parcel scheme, when 3,500 items of food, clothing and money were donated at various shops and distributed to 380 homes. This project continued successfully, latterly with the help of other local clubs, for ten years.

A major undertaking was the Helensburgh 70 Exhibition in the Victoria Halls, with every club in the town invited to put on a display. The planning, the erection of some 30 display units, and catering involved every member. The exhibition attracted over 3,000 visitors and culminated in handing over a new minibus to the Helensburgh branch of the Scottish Society for the Mentally Handicapped, now known as Enable.

In 1971 the club sponsored the formation of Helensburgh Probus Club for retired professional and business men, which proved popular from the start and to this day as over 100 members.

A few months later the Inner Wheel Club of Helensburgh was formed and received its Charter in June 1972. Members gave considerable service to the community for 40 years, but it folded in 2012 to be replaced by an informal Friendship Group.

Christmas 1972 saw the first of a series of annual parties for about 80 overseas students visiting the area through the British Council. Many wore national costume, and both members and the guests provided the entertainment. The same year the Special Service Award was inaugurated and has since been presented from time to time to many who have given exceptional to Helensburgh and its residents.

A fire at the Commodore Hotel in 1977 destroyed a fine lecturn presented by the Bennettsville club, but it was very kindly replaced by the Strathendrick club.

As part of the programme to mark the 75th anniversary of Rotary International, the club provided a guide dog for a blind person at a cost of £1,000, and it was puppy-walked by a member for many months. The club also chartered the steamer Waverley for an anniversary cruise.

There was a continuing interest in Erskine Hospital for Disabled Ex-Servicemen and Women, with frequent visits, and in 1982 the club provided a large greenhouse for the disabled — a project which won a prize of £500 in a national contest.

The club’s largest single contribution to Erskine came in 1982, when a hugely successful international Boxing Night and Dinner at the Normandy Hotel at Renfrew raised £8,000. Of this, £4,000 went to Erskine and £3,000 went to the Ruth Brown Blood Cell Processor Fund, set up by the wife of then member Bobby Brown, a former Rangers goalkeeper and Scotland football manager.

The club was involved in the formation of two new clubs in 1981. The first was the Rosneath Peninsula Rotary Club, since renamed the Rotary Club of Helensburgh Garelochside. The second was Helensburgh Rotaract Club for young people, which ran successfully for a number of years and was involved in various community projects, but then folded.

The club celebrated its 21st anniversary year in 1985, with a dinner in the Victoria Halls attended by Rotary International in Britain and Ireland president Jack Croxford. That year member Rex Cook was District Governor of District 230 (now 1230), and the club had the enormous but satisfying task of organising his District Conference at Aviemore.

It was attended by Rotary International president Edward F.Cadman, of the Rotary Club of Wenatchee, Washington, U.S.A., and it is believed that this is the only time the top man of Rotary has attended a District Conference in Scotland. 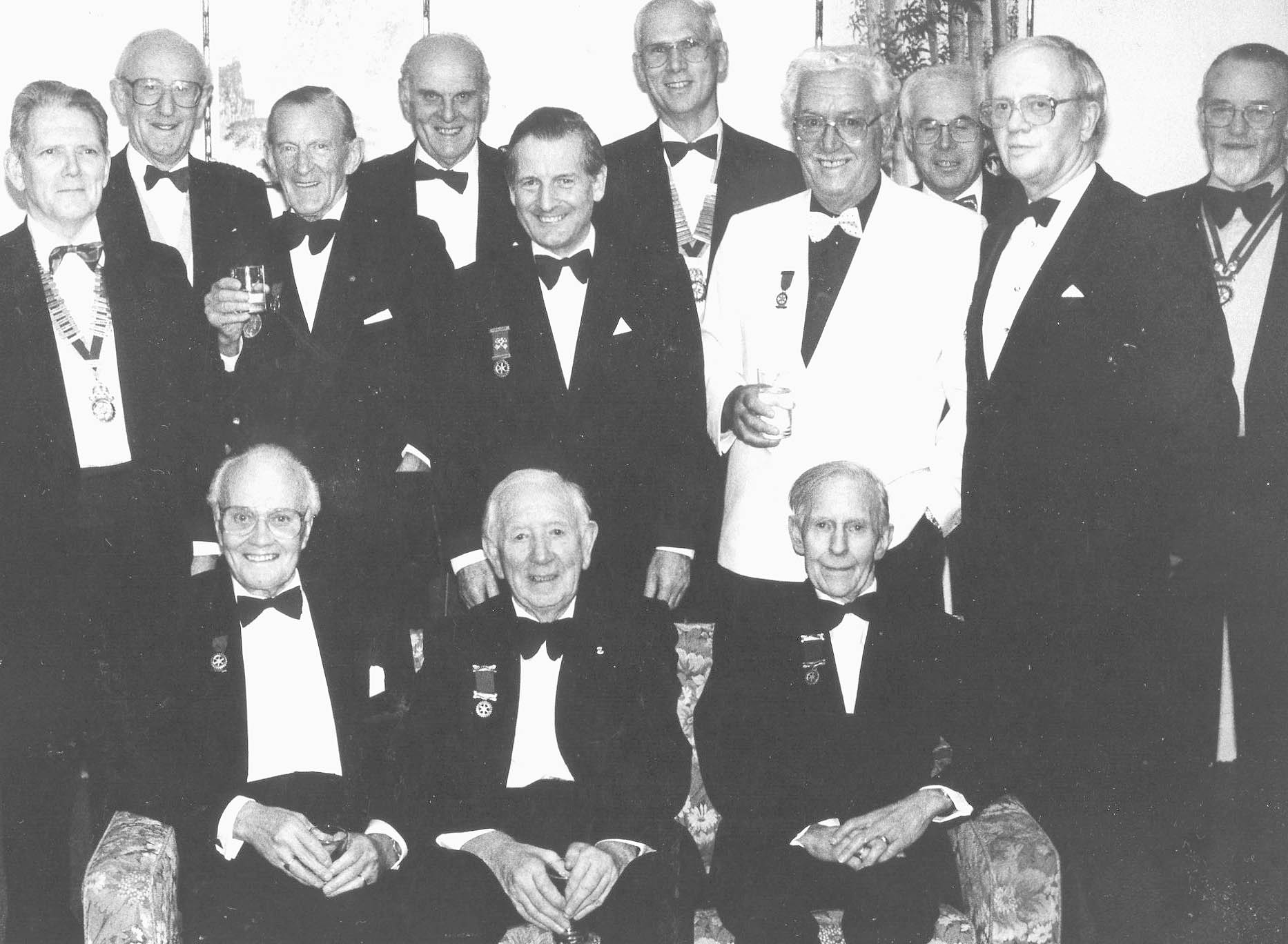 Over the years all sorts of events have been held to support local and rotary good causes.

A weekly raffle was held in aid of the Helensburgh Lions Club community minibus while it was still in operation, young people are sponsored for trips abroad, and Aquaboxes and Shelterboxes filled for use in major emergencies and disasters around the world.

Youth exchange and group study exchange parties have been hosted, Big Band Nights raised cash for the main rotary charity Rotary Foundation, regular bookstalls are held in the town, and there have been sponsored walks and cycle trips.

Club history was made on June 26 2007 when the first lady member, travel agent Linda Harvey, was inducted into membership, and she was closely followed by the Commodore Clyde, Carolyn Stait. On July 1 2015 Lesley Kennedy will become the club's first lady president.

The 50th anniversary of the Charter Dinner fell on September 18 2014, but as this was the day of the referendum on Scottish Independence it was decided to leave the Golden Jubilee Dinner until November 20.

At the dinner District 1230 Governor John Waddell passed on congratulations and good wishes to president Bill Deans and members from RI, RIBI and District 1230, and presented the club with a framed certificate from RI marking 50 years of service and a letter from RI president Gary C.K. Huang, Rotary's first Chinese president.

Former member the Rev David Clark, who was president in 1996-97, concluded an entertaining talk by proposing a toast to the club, and past president Gordon Burgess, the only remaining founder member and president in 1980-81, replied with many tales of the club's past.

Club members to have been given the honour of becoming Paul Harris Fellows have included George Boyd, Walter Bryden, Rex Cook, Bill Morrison and Ron Dunachie.

The club, which now meets in the Royal Northern and Clyde Yacht Club at Rhu every Tuesday lunchtime, has its own website on http://www.ribi.org/clubs/homepage.asp?ClubID=1361.

The interior picture was taken at the Rosslea Hall Hotel, Rhu, on October 21 1994 at a dinner to mark the club’s 30th anniversary. Seated at the front are Jack Quinlan, Angus Wylie and Willie Mickel. Among those standing are David Arthur, Walter Bryden, Gordon Hattle, Denis Taylor, Mel MacDonald, Craig Jeffrey, Gordon Burgess and Rex Cook.