HELENSBURGH Art Club’s annual Art Show in the Victoria Hall in 2018 paid a special tribute to six talented members who died in the previous year.

Art Club past chairman Brian Weston said: “The club has mounted many retrospective exhibitions over the years, but this was the first time we had undertaken one like this.

“Lots of people took the chance to admire the work of these artists, all of whom are much missed.” 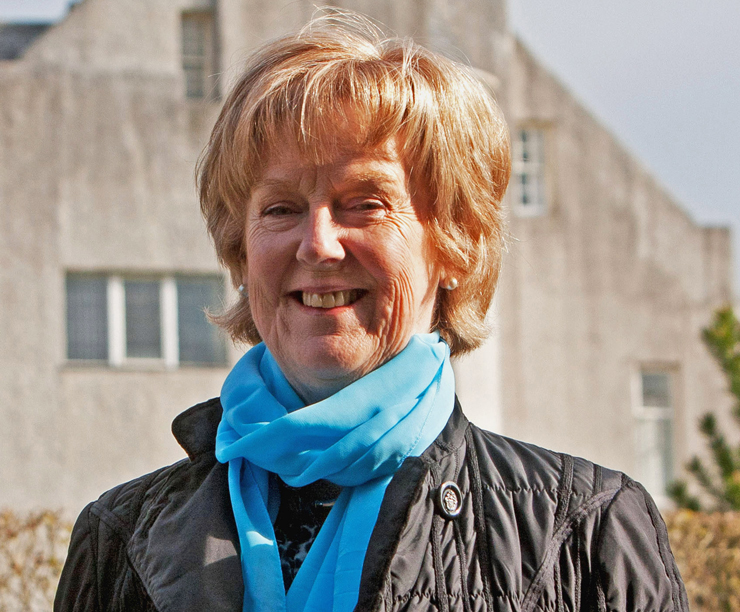 The best known of the six was Mary Batchelor (right) who lived in Rhu and was one of Scotland’s leading and best-loved contemporary artists.

She died in October 2017 at the age of 73, leaving a legacy of joy in both her work and her life.

A member of Paisley Art Institute, she was the winner of the Mayfest MacRoberts Prize in 1997 and the recipient of the prestigious Charles Rennie Mackintosh Residency in Collioure, France, in 2011.

Mary’s work was bold, bright and full of energy and vigour, and brought pleasure to gallery spaces and people’s homes across the UK and further afield.

She loved to travel, and scenes from her journeys featured in her paintings. The places she loved most were in her native Scotland, particularly the western highlands and islands.

She began classes at Glasgow School of Art in the early 1990s under the tutelage of Norman Kirkham, Peter Howson and David Linley, who inspired her.

Mary admired the Scottish Colourists, especially the use of light and shade, as well as their seemingly effortless, confident approach.

After her time at art school, she began to exhibit, often with friends or as part of group shows.

On family holidays, she sailed the length of the west coast, often mooring in bays inaccessible by road. It was a happy hunting ground for less familiar, but nonetheless stunning, scenes which she could translate to canvas and bring to the attention of a greater audience.

A great supporter of charitable shows and events, Mary frequently donated paintings and prints to help raise money for causes close to her heart.

Muriel Borland was born in Glasgow in 1929, and at the age of two she moved to Helensburgh where she was brought up and lived for the rest of her life until she died in January.

She became well known locally through her involvement in art, tennis at both burgh clubs, music and gardening.

Her interest in art began early, in part inspired by her father who was a talented artist in his own right.

She had success at school with art prizes and commendations in school competitions. Her perfectionism was evident even in some of these earliest works

It had always been her dream to apply to the Glasgow School of Art but in a sad turn of fate she lost her father suddenly when she was only fourteen, and her life took a different path.

A more conventional career followed in secretarial work, teaching and ultimately in GP practice management. But never did she lose her love of art.

Early on she identified pastels as her chosen medium. She loved how they could be blended and smudged, allowing her to create the softness which was to become a hallmark of her work.

When her daughters presented her with an enormous box of rainbow colours and shades of her favourite brand, there was no stopping her!

Her passion was in creating local landscapes with beautiful skies — and flower studies, the latter combining with her great passion for gardening.

She was a long standing and enthusiastic member of the Art Club, enjoying exhibiting her work on many occasions, but she was equally at home contributing to the running of the club.

She could turn her hand to many a task and could always be relied upon to hang pictures, make cups of tea and man the desk at exhibition time — smiling as she did so!

Fay Marshall was born in 1922 and died in 2017. She was educated at Glasgow High School and then studied at Glasgow School of Art.

She did not finish her degree as she wanted to serve as a Wren during World War Two — which did not please her mother.

She and her dentist husband Ronnie moved to Helensburgh in 1948, and there she raised their six children.

She returned to art in the 1970s and joined the Art Club, attending many of the classes and exhibiting at the annual show. She carried on drawing and painting until a few years before she died.

Film was the main medium for Eddie McConnell (1936-2018), who attended Glasgow School of Art from 1954-59 where he studied sculpture under Benno Schotz.

With an interest from boyhood in film, he started a Film Club at art school for the showing of avant-garde films. He believed that film provided a vehicle for the integration of all the visual arts and music.

In 1957 his film ‘Broken Images’ won an Amateur Cine World award. This was followed two years later by ‘Faces’, a film in which all the masks were designed and made by fellow art student Alasdair Gray.

When Scottish Television began broadcasting in 1960, Eddie was in demand as a freelance cinematographer contributing items to sport and news. There he came under the influence of Dr John Grierson, the ‘father’ of documentary film.

The company Eddie formed with two friends in 1963 went on to produce many documentaries and cinema shorts for the Films of Scotland Committee, the Central Office of Information, and the Children′s Film Foundation.

The opening of Channel 4 TV freed Eddie from corporate sponsorship and for C4 he created some of his finest work.

His film career brought him many awards including a Scottish BAFTA in 2007 for his outstanding contribution to Scottish film, and the McConnell Collection is now lodged with the National Library of Scotland Moving Image Archive.

In his last ten years, Eddie rediscovered his interest in drawing and painting and much enjoyed his time at the Art Club’s portrait and life drawing classes.

“Eddie with his film team had been sent out to interview and make a short film for a TV company of Salvador Dali at Port Lligat, near Cadaquez in north east Spain.

“The great artist, being a trifle eccentric, suggested that he should be hauled up heavenwards by attaching his ‘moustachios’ by wire to a helicopter.

“It was arranged that a special body harness would be attached to Dali so that he could be hauled up safely, yet making it appear that this was only attached to his moustache.

“While this was happening, his acolytes cut open pillows to scatter goose feathers about, to give the impression that he was disappearing into heaven through a cloud.”

James Murdoch (1934-2017) lived all of his life in Alexandria and taught religious education at Vale of Leven primary schools.

When he retired he took up painting, mainly in watercolour, and became a professional member of the Society of All Artists.

He held exhibitions in Alexandria, exhibited at Pitlochry Festival Theatre and led workshops there.

He visited Pitlochry many times and painted many of the local scenes, and it was his favourite painting location.

Dumbarton man Burns Shearer (1946-2018), a solicitor, was a leading local amateur actor with Dumbarton People’s Theatre as well as an artist.

Most of his paintings were of his native Scotland, although the landscapes of France, Greece, and Morocco often inspired his work. For the most part, he painted or sketched simply for his own pleasure.

In his later years, he benefitted from the encouragement and guidance of tutors at Glasgow School of Art.

Burns painted regularly with other West Coast artists known as The Martes Group, and his paintings expressed a sense of joy evoked by the interplay of art and colour.

In 2009 he presented solo exhibitions of his paintings at The Gallery on the Gigha and The Back Door Gallery at Dalmuir.

Burns qualified as a solicitor in 1970 and was a partner in the commercial property department of MacRoberts, Solicitors, Glasgow, for most of his professional life until retirement in 2001.