A KEY figure in the early days of scouting is buried in the old part of the graveyard at Rosneath Parish Church.

Major Frederick Maurice Crum, who died after a colourful life on October 8 1955 at his home at Kenmuir, Rosneath, at the age of 82 from heart disease, is remembered for his service to the movement in Scotland.

While he only lived on the peninsula in his final years, it was a place he loved and visited often on military and then scout expeditions and camps.

He published what the Helensburgh and Gareloch Times described as “a very interesting book” on Rosneath, particularly aimed at Girl Guides and Boy Scouts.

Kenmuir, sometimes spelt Kenmure, was for many years the home of his older brother, retired general merchant Walter Graham Crum, who died on February 19 1947 at the age of 76.

Born on October 12 1872, Frederick was the son of calico printer William Graham Crum and his wife Jean Mary Campbell.

The Crum family came from Thornliebank, becoming very wealthy as industrial chemists in the calico industry in Glasgow.

Frederick entered military service and went on to specialise in sniper tactics and the training of riflemen, but he was invalided out of the Army in 1909 because of wounds suffered in the Boer War.

In May 1909 he read a copy of Scouting for Boys whilst staying at St Andrews and in June he was so impressed with a troop of Scouts from Bannockburn that, with Robert Miller, he founded the 7th Stirling Troop at his estate at Auchenbowie in July 1909.

He became Scottish Scout Commissioner in 1912, returning to being Scoutmaster at the 1st Troop in Stirling, and also in Menstrie. He went on to work tirelessly for Scouting and also later founded Stirling Boys Club.

His military career blossomed from February 1893 when, having been a Gentleman Cadet at the Royal Military College, he was commissioned as a Second Lieutenant in the King’s Royal Rifle Corps.

He served with the 1/60th Rifles at Rawal Pindi in India and then in South Africa before and during the second South African War, which was declared on October 12 1899.

Soon the young Crum was in the thick of the action, but he received a wound to his right shoulder at the battle of Talana Hill, which would blight him until 1919.

Being wounded and unable to fend for himself he was taken prisoner and at times his survival was looking doubtful. Fortunately he eventually ended up in a hospital in Ladysmith where he received treatment which saved his life.

He remained a prisoner until June 1900 when he and a further 150 or so officers and 3000 troops were released at Ladysmith. Many were in poor condition because of their wounds and poor health.

The following year he was promoted to Captain. He had lost his molar teeth, and he had to eat special meals in the field as he could not chew. Then he became the youngest officer to hold the rank of Major.

His last night patrol of the war was in January 1902 as after this he was given leave to return home on medical grounds.

His journey started in an ambulance train and then a long sail home. Six months later he was fully recuperated and returned to the Cape, being posted to De Aar.

In December 1902 the Battalion was moved to Malta. In 1903 he gave his first lecture, and his topic was “Mounted Infantry”. Shortly after this he received three months leave and he returned to his then home to Stirling.

In December 1903 he transferred to the 2nd Battalion of the 60th Rifles as a Brevet-Major and in October 1904 he qualified in Hindustani.

During his service career he was often bothered by the wound which he received in 1900, and in 1904 a surgeon removed an inch of bone and some splinters from his right arm.

During his time in South Africa, Major Crum wrote a book called “With the mounted infantry in South Africa; being side-lights on the Boer campaign 1899-1902”, and this was published in 1903.

In January 1905 he arrived home on leave because of the wound to his right arm, but by November he was back in India.

The following year was to prove very important to him and the Boy Scout movement, as he was posted to Scout Training at Rhanikhet where he excelled. In November 1906 he received leave to return home to cram for staff college exams.

He underwent intensive learning to bring himself up to the level of passing the Staff College entry exams.

In March 1907 he sailed from Marseille to Aden to sit the exams. Possibly luckily for the Boy Scout movement, he failed the exams and therefore did not attend Staff College — and further promotion did not follow.

In June he returned to India and was posted to Jubbulpore, and in October he was put in charge of the Battalion for three weeks until the new Commanding Officer arrived.

In February 1908 he was posted to the Mounted Infantry School at Fategarh where he excelled and became Assistant Commandant.

Again luck was not on his side and in May he fell from his horse whilst pig sticking and was given a week’s leave in the hills. But it took him three years to fully recover from his wound and ill health.

November 3 1910 proved to be a very important date as this was when he met Robert Baden-Powell for the first time.He was very impressed by him and his views on helping young people.

When the First World War was declared on July 28 1914 he re-enlisted and served at Hamilton Barracks organising new recruits, using Boy Scouts to act as guides to the new arrivals.

The following May the Battalion left Aldershot for France and were soon in the trenches near Kemmel during most of the Second Battle of Ypres. 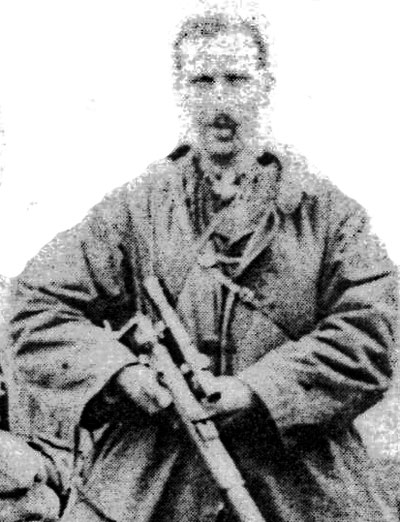 May 1916 saw him on the move again, this time to Acq to start a Brigade School of Sniping. It was while there that he wrote “Scouts and Snipers in the trenches”.

His health was again proving a problem, and from October for six months he was attached to Aldershot Senior Officers School initially as an instructor, taking over the existing Sniping School.

While at the school he suggested to higher authority that co-ordination of training in France and the UK was lacking and that often officers serving in the trenches did not know how to use the trained scouts or snipers.

As a result he took over the co-ordination of scouting and sniper training throughout the army.

In April 1918 he was offered the task of lecturing on Sniping and Scouting to the various Officer Cadet Battalions around the country. During these trips he often visited Boy Scout Troops.

After six months he left the army and returned to Scouting in Scotland. He was sent to Miss Absolom’s Nursing Home in Edinburgh to recuperate.

On February 6 1919 Sir Harold Stiles operated on his right arm which had been causing him problems since October 1909, and by May he was fully recovered — and devoted most of the rest of his life to the Scout movement.

In 1948 Helensburgh printers and publishers Macneur & Bryden published his book ‘The Isle of Rosneath: Notes for Scouts and Guides’. Two years later his life story, ‘Memoirs of a Rifleman Scout’, was published.

He was appointed a Deputy Lieutenant for the county of Stirling in March 1933 and a J.P. in 1936. In April 1954 Stirling Town Council awarded him the freedom of the burgh.

In his speech of thanks he said: “This honour you do me is valued a thousand times more by me because I have felt it is shared by so many good friends and colleagues now passed on, and by the many who still are giving a hand and leading youth of today, together with others we would always gladly welcome in this service.

“We are all united in one common cause — the good name of Stirling; and, as we look forward, we look wider yet. We pray ‘God save the Queen’! We salute and remember how much all this means.”

That same year, his 82nd, he wrote a Memoir of Alexander Crum of Thornliebank 1828-93 and compiled a family tree of the Crum family.

His regimental obituary described him as a ‘fearless leader, modest and calm’, a pioneer ‘who was always looking forward, always giving a lead and calling on others to lead.’ 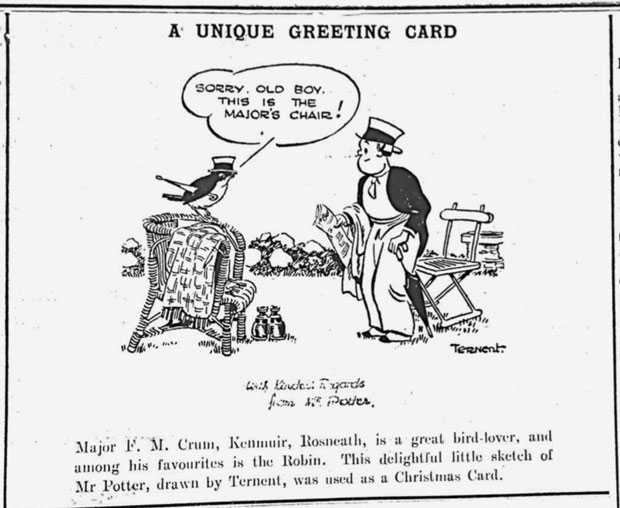 The Helensburgh and Gareloch Times stated: “Major Crum will long be remembered for his kindliness and his enthusiastic and practical work among the youth of Scotland.”

A memorial service was held a few days after his death in the Church of the Holy Rude in Stirling.

It was attended by members of the various associations he worked with, as well as Sir Ian Bolton, Stirlingshire Lord Lieutenant, Provost D.W.Duncan, magistrates and councillors, and various scout dignitaries.

Another Scouting pioneer, businessman William Frederick de Bois Maclaren, of Armadale, Clynder, is also buried in the old part of the graveyard at Rosneath Parish Church.

He was District Commissioner for West Dunbartonshire and donated the Boy Scout Association training centre at Gilwell Park.