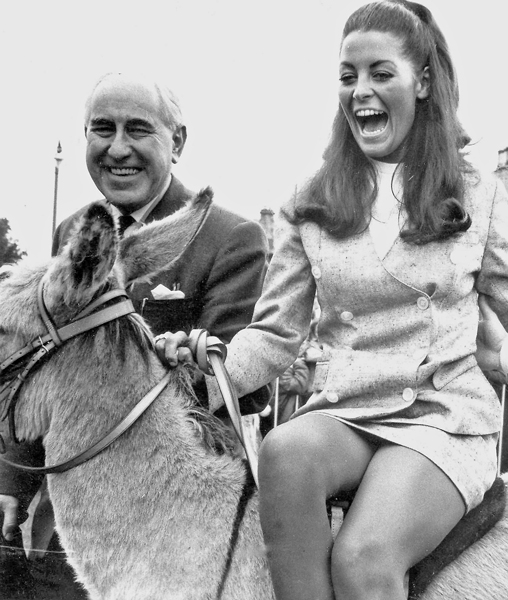 ONE of Helensburgh and district’s best known service organisations, the Lions Club, had plenty to roar about in 2014.

It was the 50th anniversary of the formation of the club, and it is now the longest serving Lions Club in Scotland.

The main celebration was a formal dinner at Helensburgh Golf Club — where the club meets on the first and third Tuesdays of each month — for members and guests.

Speakers included the current president, Don MacDonald, a representative of Lions HQ, Murray Waddell of Helensburgh Golf Club, and ex-Provost Billy Petrie who spoke entertainingly about the early years of the club and its involvement in the community.

Those early years much a huge impact on the town, with Gala Days, beauty queens, and the indispensable Hospital Bus service.

The Helensburgh club, which was sponsored by the now closed Glasgow club, went on to sponsor the Edinburgh, Stirling, Dumbarton and Bearsden clubs.

A very special occasion was a visit by the International President who presented the Lions International’s highest humanitarian award to Cloudy Williamson — an award previously presented to Albert Schweitzer and the Queen of Thailand.

In those days for many townsfolk the highlight of the summer was the annual Lions Carnival Week during the Glasgow Fair.

This included a Beauty Pageant at the outdoor swimming pool, treasure hunts, bowling wappinschaws, and a Gala Day with a Donkey Derby in East King Street Park.

One of the highlights of membership was to provide all night security for the Gala Day, a duty which involved one or two refreshments! It ran for some 20 years, by which time holiday activities had changed.

The club bought its first minibus in 1964 and it initially provided a thrice weekly service to the Vale of Leven Hospital and twice weekly to Camis Eskan Geriatric Hospital.

Many replacement buses were bought over the 40 years the service was required, and latterly the bus was used as a community bus by many local organisations.

In the early days many local children were taken to Scarborough in the minibus to enjoy a holiday at a Lions Club facility in the English seaside town.

Charity concerts by stars such as the Corries folk group and performer Molly Urquhart were a feature of those early years, and in conjunction with Helensburgh Rotary Club a foetal monitor was provided for the Vale of Leven Hospital — a significant purchase at the time.

In the late 80s the club acquired a caravan which was sited at Heads of Ayr, and the minibus transported families who would benefit from a holiday for a week’s break.

For many years the club supported the Christmas lunches at Hermitage School in conjunction with Royal Navy personnel and canteen staff at the school.

For 30 years members visited hospitals in Helensburgh and Dumbarton with Father Christmas on Christmas Day to distribute small gifts to patients and provide festive music.

Computers were bought for local primary schools and a personal development system for secondary school children.

2014 president Don MacDonald said: “A Challenger dinghy for disabled sailors was among the many one-off donations the club made.

“To recognise the Millennium we provided all local school children with an illuminated plan of the town which pointed out some local history.”

The club still plays a big part in local life — including organising a Senior Citizens lunch in February and a Senior Citizens Tea in September, and giving financial support to deserving individuals and many local charities and organisations.

Members collect used spectacles for recycling and provide Message in a Bottle for people with medical conditions to record their medication should they be need to go to hospital.

Fund raising includes an Easter Egg raffle with the support of local pubs and clubs, Race Nights, and for 26 years the hugely popular Charity Golf Day by courtesy of Helensburgh Golf Club. The club also receives donations from local organisations and individuals.

Tom Dunn, whose father Bert joined the club in 1964, has been a member for 38 years.

"I have seen many changes to the way the club operates over the years as the needs we serve have altered,” he said. “However, the one constant is the tremendous support we enjoy from the local community."

President Don added: "I have only been a member for a few years and I have thoroughly enjoyed getting involved in the club’s activities.

“New members are the life blood of any club, and I would encourage anyone with a few hours to spare to consider joining us as we try to improve the well being of the local community."

The Helensburgh club is part of the world’s largest international service organisation, Lions International, which was founded in 1917 and now has a worldwide membership of 1.35 million in over 200 countries.

The club makes a regular contribution to worldwide funds to assist in disasters and international humanitarian initiatives. In just over 40 years over $826 million dollars has been made available.