A YOUNG Helensburgh man who went straight from school into the Royal Air Force in the Second World War shot down and destroyed four aircraft before he himself lost his life while on a mission.

Flight Lieutenant Robert Henderson, DFC, known to family and friends as Rob, was the second son of Thomas B.Henderson, of Dungoyne, 1 Upper Colquhoun Street, and his wife Ethel, and was educated at the prestigious Rugby School.

Soon after his pilot training was complete he was shot down over North Africa on February 2 1942 while flying a 274 Squadron Hurricane by the Luftwaffe ace Hans Joachim Marseille, who was flying a Messerchmit BF109.

His aircraft crashed south of Tobruk, but he escaped serious injury.

His log book records that he thought he had been hit by defence flak and so was not aware that he and three other pilots had all been shot down by Marseille.

His nephew, also Rob, said: "It was a lucky escape — my uncle came down in a mine field on the outskirts of Tobruk with only small fragments of flak in his left ankle. Six days later he was flying another sortie over the front line."

Marseille lost his life six months later through mechanical failure on the new plane he was flying.

The squadron was based in Egypt, flying Spitfires to support the Allies on the ground. They provided air cover at the Battle of El Alamein and on April 18 1943, eleven Spitfires from the squadron flew top cover at the Palm Sunday Massacre during which approximately 75 axis aircraft were disabled or destroyed.

Following the Allied victory in North Africa, the squadron moved to Malta in June 1943 and went on to provide air cover for the 8th Army during the campaigns in Sicily and Italy, arriving on Italian soil on September 14 1943.

They then followed the armies up the Italian coast as part of No.244 Wing and No.211 (Offensive Fighter) Group.

By April 7 1944, when Robert was awarded the Distinguished Flying Cross, he had flown 118 sorties and 150 operational hours as pilot.

The citation read: "This officer has proved to be an excellent pilot whose fine fighting spirit, courage and devotion to duty have always been marked, whatever the opposition he has encountered.

"A gallant leader, Flying Officer Henderson has destroyed at least four enemy aircraft and damaged others."

A month later he was promoted to Flight Lieutenant and transferred to 241 Squadron, which was based at Bellaria, near Rimini, and whose mission was ground attack and tactical reconnaissance in North Africa and Italy.

An account of this incident was published soon after in the Helensburgh and Gareloch Times. It recorded . . .

"The capture of a Luftwaffe pilot by Eighth Army troops in a forward area confirmed the destruction of a German reconnaissance aircraft, a two-engined M.E.410, which was only claimed as damaged by the Scottish Spitfire pilot. The German pilot was found wandering in the hills.

"The successful Spitfire pilot was Flying Officer Robert Henderson, who said he intercepted the M.E. 410 at a great height just inside our lines. He closed in, but, because of a dense vapour trail, could only see the rudder of the enemy aircraft. 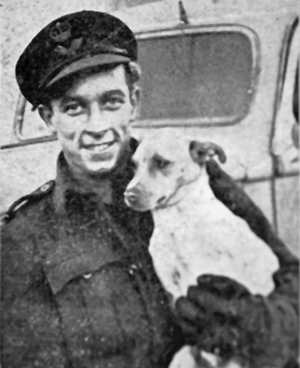 "Fire astern must have put the enemy rear-gunner out of action, and then the German aircraft started losing height rapidly. It was last seen almost a deck-level among the hills. Henderson was credited only with a 'damaged'.

"His success brings the famous East India Squadron's score to 296 and a half. All the pilots are desperately keen to bring the total to the third-century mark."

However it has since emerged that it was the rear gunner who was captured, not the pilot.

On February 2 he shot down and destroyed a fourth aircraft over Anzio.

The East India Squadron claimed the highest number of victories scored, 317, in the RAF during the war.

Rob lost his life on January 29 1945 at the age of just 22. The family have two accounts of what happened, from his commanding officer Squadron Leader Alan Radcliffe, and a fellow pilot, Flight Lieutenant Kenneth Sissons.

The burgh man was returning from a long range strafe in the north of Italy and when only 15 minutes from his base at Bellaria he ran into extremely bad weather.

He was flying no.2 to the formation leader, but when the main formation broke cloud over the Adriatic Sea about 10 miles from their base he was not with them.

On another wireless wavelength he had reported to Control that his instruments had frozen and he was about to bale out.

However, he appears to have hit the sea in his aircraft before he was able to bale out, as the plane was by then out of control at a very low altitude.

Air Sea Rescue and other aircraft from the squadron searched a wide area around the place where he was known to have crashed until last light, but no trace could be found of him or his aircraft.

He was reported missing, presumed killed in action and lost at sea. In all he had destroyed four enemy aircraft, with a further two probables and five damaged.

His name is recorded on the Hermitage Park War Memorial and the Commonwealth Air Forces Memorial at Floriana, Malta, for those who lost their lives in the Mediterranean in World War Two, which was unveiled by the Queen on May 3 1954. It is also recorded in the Memorial Chapel at Rugby School.

Nephew Rob said that pilot Rob's parents moved from Glasgow to Helensburgh some time after July 9 1921 when their first son, nephew Rob's father Tommy, was born.

They lived at Dungoyne from 1922 to 1946, when they moved to the nearby Belmar in West Lennox Drive. In 1958 they moved to High Laggary at the top of Station Road, Rhu, where they remained until both died in 1964.

They had four other children, John, Mike, Joan and David, of whom only David, the youngest, survives today.

Tommy and his wife set up home at West Gable in Rowallan Street when they married in 1952, and lived there until 1964 when they moved to High Laggary. It remained their family home until 1996 when Rob's mother died.

Nephew Rob, who lives in Ashampstead, Berkshire, said: "I have Rob's Pilot's Flying Log Book, which covers the period from July 15 1941 when he started operational flying duties, up until May 11 1942.

"I also have an album of personal photographs which he took while he was in North Africa during that period. One of my cousins has given me his DFC medal and his personal diaries from 1943 and 1944. I have also obtained a copy of his official war service record from the RAF archives.

"We are planning to bring all the material together in one place, and I have offered to act as family archivist."