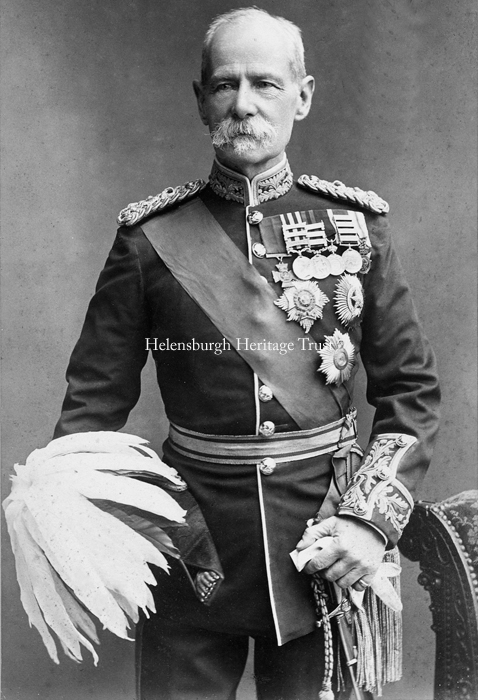 A VICTORIA CROSS winner and Commander-in-Chief of the British Army had close family ties with Helensburgh.

Field Marshal Earl Roberts, possibly the most decorated soldier in the army’s history, is commemorated with a large equestrian bronze statue on the slopes of Park Circus in Glasgow, overlooking Kelvingrove Park.

But he visited the burgh on many occasions, and his family members include a number who played a very active part in the life and work of the community.

Born in 1832 at Cawnpore, India, Frederick Sleigh Roberts was of Anglo-Irish stock, a son of General Sir Abraham Roberts and his second wife, Nora Bews, and grandson of the Rev John Roberts and Ann Sandys. The family's Irish roots were centred in the Waterford area.

With General Sir Abraham spending much of his military career in India, it was perhaps inevitable that son Frederick, also destined for an army career, should also see service there.

His Victoria Cross came as a result of actions at Khudanganj on January 2 1858, when the young Lieutenant single-handedly captured a standard from two sepoys, and also cut down a sepoy about to kill a mounted Indian trooper.

Perhaps uniquely, one of his own sons, also called Frederick, was also awarded the VC, this time during the Boer War, but it was a posthumous award.

Promotion was rapid, and in due course he came to command the British forces successively in Afghanistan, India, and in South Africa.

Created a baronet in 1881, he was made Earl Roberts of Kandahar, Pretoria and Waterford in 1901, the same year that he was appointed Commander-in-Chief of the British Army, a post he held until 1904.

His father, General Sir Abraham, had a number of siblings, including a sister, Eliza, who in 1827 married a John Greensill, at Waterford. John's career was also spent in military service, in which he rose to the rank of Major.

Life in the Army could result in very varied postings, and Major Greensill saw service not only in Ireland, England and Scotland, but also in places like India and Nova Scotia.

However, John and Eliza also did find time to raise a family, and among their children were Rosamond Roberts and Mary Anne Maria Collier. The family association with Helensburgh springs mostly from these two cousins of Lord Roberts.

Mary Anne, born in Ireland in 1839, married Alva-born doctor’s son the Rev John Stuart Syme in 1862. Shortly before the wedding, John was called to the charge of the Episcopalian Church in Helensburgh.

The young couple set up home at what was then known as The Parsonage —  now The Rectory — in William Street close to the church, which was then called The Holy Trinity.

The rapid growth of Helensburgh meant that Holy Trinity was becoming too small for the expanding congregation, and a new church in red sandstone, the present St Michael and All Angels, was built as a replacement in 1867-68.

The household at The Parsonage was also expanding. The minister and his wife were starting to raise a family of their own, but in addition, Major Greensill, Mary's father, a widower since 1851, was now in residence, as was his other daughter, Rosamond Roberts.

Rosamond had been married to Lieutenant Francis Skottowe, an officer in Her Majesty's Indian Navy, but had been widowed, and came to live at The Parsonage, along with her young son, Alexander John Francis.

The vagaries of a military life had also affected a brother of Rosamond and Mary Anne's, Thomas Maling, a Captain in the South Wales Borderers, but a tragic misunderstanding cost him his life at Delhi in 1857.

Challenged at a checkpoint, he had forgotten the password, so the sentry on duty opened fire. There is a tablet on the wall at St Michael's commemorating his life.

Their father, Major Greensill, died at The Parsonage in May 1874 at the age of 77.

Rosamond, her name being a popular one within the Roberts family, soon became a well-known figure in the town. Organist at St Michael's for 35 years, she was not only a gifted musician but was also very active in church institutions such as the Sunday School.

Lord Roberts visited his cousins, Rosamond and Mary Anne, at their home on a number of occasions, and, when in London, Rosamond would return the compliment.

In her later years, she moved to Millbrae, 10 East Argyle Street, along with son Frank. She died after a short illness at the end of April 1901.

She was greatly liked in the general community as well as in the congregation, and local shops closed as a mark of respect when her funeral cortege passed along Clyde Street on the way to the cemetery.

Rosamond's son, Alexander John Francis Skottowe — or Frank, as he was known — also became a prominent figure in Helensburgh.

Born in Bombay, Frank studied medicine at Glasgow University, graduating MB and CM in 1883, and MD in 1886.

His talents soon shone through, and in due course he came to hold an important government post in Fiji, where he was able to develop much administrative as well as medical expertise.

Prevailed upon by friends to return home, he came back to Scotland, and in 1892, was appointed Hospital Doctor, Medical Officer of Health for the Burgh of Helensburgh, and Police Surgeon, taking over from the celebrated Dr Fordyce Messer.

Described by a contemporary as a first-class Medical Officer, Dr Skottowe brought in a number of innovations.

One of these concerned the treatment of patients suffering from tuberculosis. Some years earlier, a small building of corrugated iron had been erected for the treatment of smallpox, but with cases having fallen away, Dr Skottowe saw the opportunity to have it converted to new use.

He implemented the radical ideas of Dr Robert Phillip in the treatment of TB, particularly the use of a good deal of fresh air, which was very much against the older ways of thinking.

Dr Skottowe resigned his post about 1911, taking up an overseas post as Medical Officer with the Anglo-Persian Oil Company. While serving in that capacity, he died at Mohammerah, in the Persian Gulf in November 1914.

Back in Helensburgh, there had been changes at The Parsonage. After a remarkable period of 43 years as Rector at St Michael's, Mr Syme retired in June 1905.

During his time, he had witnessed the growth of both town and congregation. At the retirement presentation, mention was made of his particular satisfaction in the work of the church’s day school, originally formed in 1851.

He was presented with a cheque for £300, with Mrs Syme receiving a handsome gold brooch set. His successor was the Rev Charles Bernard Beard, previously Rector at St Peter's Episcopal Church, Peterhead.

Lord Roberts continued to keep in touch with family members. A sister of Lady Roberts, Mrs Snow Miller, also lived in the town at Glenan Bank.

When the Rev and Mrs Syme celebrated their golden wedding anniversary in 1912, the happy couple received a congratulatory letter from Lord Roberts, signed, in his usual manner “Your affectionate cousin, Fred”.

By the outbreak of World War One in 1914, Lord Roberts had retired, but he undertook to visit the Indian Forces, of which he was Colonel-in-Chief, at the Front. 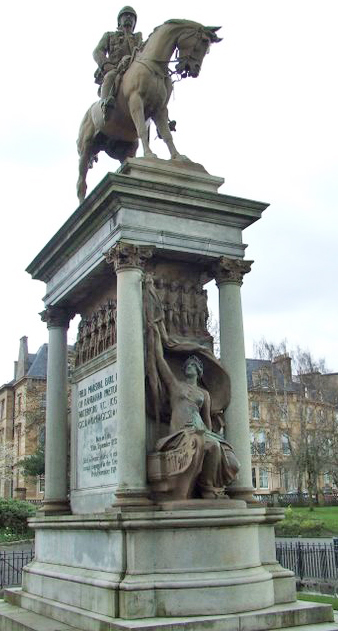 He did so in November of that year at St Omer, but contracted a chill which swiftly developed into pneumonia. His condition quickly deteriorated, and he died soon after at the age of 82.

In a curious twist of fate, the timing of his death almost coincided with that of Dr Skottowe.

It might have been expected that someone with the background and career of Lord Roberts would have been perceived as an impossibly remote and austere figure, but he appears to have been blessed with the common touch, being popular with soldiers and general public alike.

He was affectionately known as ‘Bobs’ and ’Kipling's General’, and collections were organised in Glasgow to help meet the £4,500 cost of his statue (left), when the slogan was “A bob for Bob's Day”.

These efforts proved very successful, and there was a substantial surplus. The unveiling took place in August 1916, and was very well attended.

The statue is based on an original by Harry Bates, made and erected in Calcutta in 1898. A plaster cast had been retained, and this was used by Henry Poole in making an exact copy, by courtesy of Harry Bates' widow. The casting was by J.W.Singer of Frome, Somerset.

Quite apart from the bronze equestrian casting, the granite plinth, or pedestal, on which it stands, is a huge and remarkable piece of work. The statue has withstood the elements well over the years, although there was been some serious vandalism as well.

Another copy of the statue is at Horse Guards' Parade in London, although that one sits on a very simple plinth.