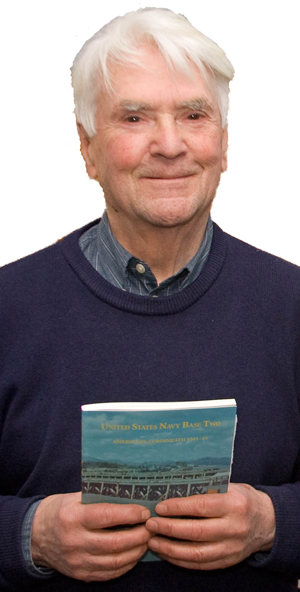 This article is reprinted from the Gareloch and Rosneath Peninsula Website by kind permission of Dennis Royal
and website administrator Margaret Isaacs.

ROSNEATH'S prestigious royal connection of some 68 years ended in 1939 with the death of H.R.H. Princess Louise, Duchess of Argyll — but World War Two was to bring a very different significance to the area.

In early 1940 the estate was sold, thus ending also some 500 years of Clan Campbell superiority at Rosneath. The near feudal village lifestyle that had prevailed for so long was now in doubt and the estate tenants faced an uncertain future.

Britain was again at war with Germany, however; defence matters were paramount and soon brought unprecedented change to the district. The military collapse of France in 1940 left Britain alone to face the reality of aerial attack, the threat of imminent invasion, and the possibility of military defeat.

In the summer of 1941, despite their neutrality in the European war, the American government, following meetings with British leaders, secretly despatched civilian contractors to the British Isles where they would build 'advance' bases for use by American forces in the increasingly likely possibility that the United States would become involved in the conflict.

Rosneath Bay on the Gareloch, with its ready access to deep water and the nearby flat lands of Rosneath estate, was chosen as a suitable site for a new naval base. In July 1941, the first group of American civilians arrived to find the 996 Dock Operating Company, Royal Engineers, already established in tented accommodation around Rosneath House.

With the arrival of more men and many shiploads of heavy construction equipment from the U.S. and with the help of the army engineers, work on the new base progressed rapidly.

The new facilities were initially used by the Royal Navy for maintenance and repair of convoy escort vessels. However, in August 1942, Rosneath Base was taken over by the U.S. Navy for the training of American amphibious forces in preparation for the proposed Allied invasion of north-west Africa, code-named 'Operation Torch'.

Rosneath House became American staff headquarters and the planning centre for 'Torch' as thousands of U.S. navy, marine corps and army personnel arrived at the base to practise amphibious landing techniques at Rosneath and around the Clyde sea-lochs.

The densely wooded Green Isle area near Rosneath House provided cover for living quarters capable of holding some 6,000 men. American troops were also billeted with local families in the Helensburgh area, along with British commandos with whom they trained for the African landings. 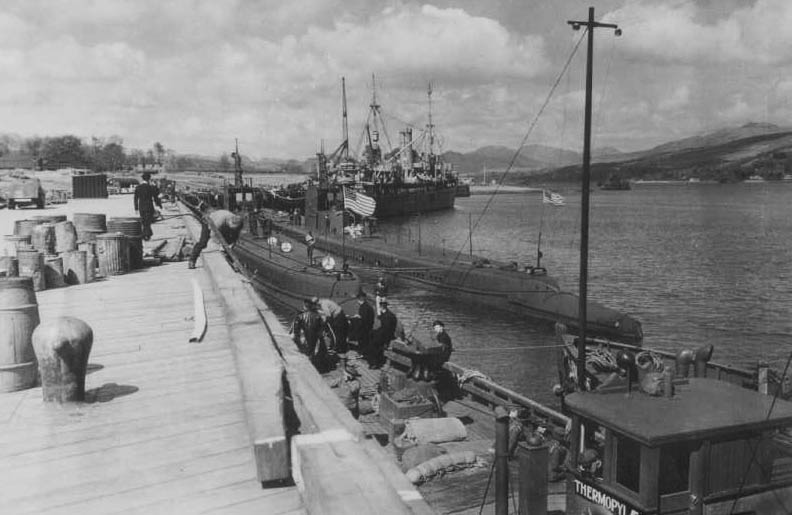 Following the success of Torch in late 1942, Rosneath Base was returned to the R.N. with the reservation of areas for use by the U.S.N. — the Clachan House 'seabee' camp, dock space for the submarine depot ship U.S.S. Beaver and the boats of Submarine Squadron 50 and the Portkil hospital complex.

Portkil, near Kilcreggan, was the site of a 200-bed naval hospital. The first draft of USN medical personnel had arrived at the hospital on 15 August 1942.

They soon made friends among the Peninsula population, and Stuart Edwin Fraser of the wartime USN medical corps wrote to the Helensburgh Advertiser in 1975 to express fond memories of his very happy two years at Portkil and the weekly dances at Cove Burgh Hall where everyone was very friendly.

The hospital continued in use for the duration of the war. Following D-Day, it was very busy as thousands of wounded survivors from vessels that had been sunk during the assault were given medical care and rest.

In August 1943, Rosneath was again taken over by the U.S.N. as their main receiving station for American naval activities in Britain and a major supply, maintenance and training centre for the U.S.N. build-up to ' D-Day': the invasion of France.

On June 6 1944, the Allied forces landed in Normandy. The USN Eleventh Amphibious Force gunfire support group, which had trained at Rosneath, provided rocket and artillery fire in support of the invading troops during the difficult landing on Omaha beach.

After D-Day, Rosneath continued as an American supply and training base and the Portkil hospital served as place of rest and medical care for the injured. But as the Allied advance into Europe continued, a gradual reduction of American naval forces in Britain took place.

Rosneath Base remained busy however as surplus ships and landing craft were prepared for transfer to the British and Russian navies under ‘lend-lease' arrangements.

Russian sailors became a common site at the base as they arrived to man ships for the voyage to Soviet ports. Marines of the Royal Netherlands Navy were also training at Rosneath during this period. In 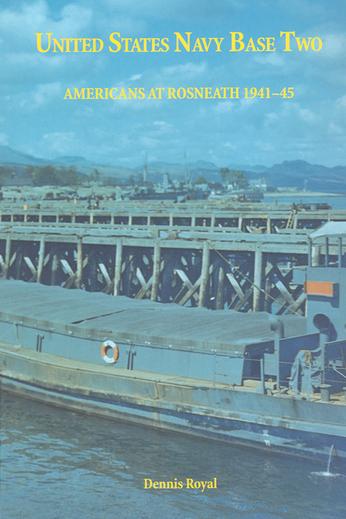 June 1945, Rosneath Base was decommissioned by the U.S.N. and finally returned to British control.

During 1946, a proposal to renovate the base facilities for use as a combined operations establishment was considered then cancelled, and in 1948 the base was closed.

With the exception of the tank farm area and the adjacent land to the north which was originally retained by the Admiralty to house new sheds for inshore minesweepers, the former base industrial area and Clachan House accommodation section around Rosneath village were eventually cleared to make way for housing, a new church and a new school.

It is over 50 years since the base was demolished and, with the exception of some rusty sheds and oil tanks, little evidence now remains of the wartime American presence.

The publication in 2000 of my history of the base entitled ‘USN Base Two: Americans at Rosneath 1941-45’ created local interest in the possibility of erecting a memorial.

A fund was established, and with donations from many local and national sources, a memorial cairn was built on a site over looking Rosneath Bay.

On September 10 2000, the United Kingdom State Society of the Daughters of the American Revolution and the Rosneath Anvil Trust dedicated the memorial to the American and British forces who served or trained at Rosneath during the years 1941-45 (pictured below).

The project was assisted by donations from local and national sources and by the owners of the Rosneath Castle Holiday Park who kindly provided the land.

Around 300 local people, including some who remembered the base in operation, attended the dedication ceremony.

The dedication service was conducted by a Clyde Naval Base chaplain, the Rev Martin Poll, with ceremonial support from a USN colour guard unit and colour bearers from the Royal British Legion and the Submarine Association.

Music was provided by the HM Naval Base Clyde Volunteer Band, with the naval patrol vessel HMS Smiter adding to the occasion as she stood by just off-shore during the ceremony.

On Friday September 10 2010 some 70 people gathered at the memorial for a rededication ceremony conducted by the Rev Andrew Alcock, which included a two minute silence and wreath-laying.