A SHY Frenchman who won some of his country’s highest honours during and after World War Two spent the final 22 years of his life in retirement in Helensburgh.

Rene Taverne, who met his wife Leda in Dunoon during the war, lived at 7 Scott Court, James Street. He died in the Vale of Leven Hospital, Alexandria, on November 27 1993 at the age of 77, and Leda died there too, six years later, at the age of 89.

Rene trained for eight years as a hairdresser, but then joined the French Navy at the age of 20. He quickly progressed through the ranks and earned the highest possible award, the Medale Militaire, for his bravery and conduct.

He became one of the first ever Commandos serving France during the later years of the Second World War, and spent several years serving his country all over Europe and Africa.

He met Leda Geri in her home town while he was temporarily based there with American service personnel, and they were married there in 1942.

That year, on August 19, he and a fellow servicemen won the Croix de Guerre, the French equivalent of a Mention in Despatches, for their courage.

In 1990 he was appointed a Chevalier (Knight) of the Legion D’Honneur (the medal citation is pictured above) in recognition of his remarkable service to his country.

He received the insignia at a special Remembrance Celebration in Greenock in June of that year to mark the 46th anniversary of the D-Day landings in Normandy, and said at the time: “This award is very special to my wife and I. I am very grateful to my country for making me so happy.”

The years after the wedding were difficult for Leda as Rene went back to France to fight, and as he was a Commando most of his operations were closely guarded secrets.

Leda even heard on the radio once that all the Commandos in the group had been slaughtered in a battle. She spent several days anxiously awaiting further news, only to hear that her husband was safe and well and fighting in a different part of Europe.

One of her most prized possessions was the gold locket Rene bought her shortly after their marriage. She kept it with her throughout the years of danger and wore it around her neck for the rest of her life.

The locket contained two cherished photographs, one each of them, taken shortly after their wedding.

In 1982 Rene was asked by a French TV company to appear in a special documentary about the Second World War in France, and, as a bad back injury prevented him from making long journeys, the company chartered a special plane to fly the couple direct from Glasgow to Dieppe and back.

“We were given the red carpet treatment,” Mrs Taverne recalled.

Two years later, to mark the 40th anniversary of the D-Day landings on June 6, he was invited to travel to London to meet the Queen Mother at a special function, then cross the Channel for a luncheon with French Commandos the following day.

However the back injury meant that he had to turn down these and other similar invitations.

“I find it difficult even to go a short way in the car,” Monsieur Taverne said at the time. “It is a shame, because I would very much like to meet the Queen Mother.

“I am sad too not to be able to go to Normandy, but if I had gone, it would have been for a remembrance and not a feast or celebration. I have a lot of friends who died in battles there. There would have been a lot of men there that I served with, because most of them still live in France.”

A colleague who served alongside Rene in the Commandos, Jean-Pierre Babin, who made his home in Dundee, said of him: “He served for a long time in the Commandos, and then left to serve on the ships. He was a war hero, but after he left the services he kept himself very much to himself.”

He often shared his wartime experiences with another Frenchman living in Helensburgh, James Besant, who said: “I used to meet him often when I went out shopping in Helensburgh, and we used to swop stories about our wartime service. We used to chat for hours.”

Monsignor Maurice Ward, who conducted Rene's funeral at St Joseph's Church, said: “He was a very fine man and I know he saved the lives of many of his comrades.

“But I also know that he did not speak much about these things, and lived a quiet life with his wife in Helensburgh.”

A collection of his medals, documents and old photographs was bequeathed to Helensburgh Heritage Trust by his widow.

The two images below were sent to the Heritage Trust by Noel Rabouhans, son of Raymond Rabouhans, a Free French commando who took part in August 1942 with Rene Taverne and No.4 Commando in the successful destruction of the Hess battery outside Dieppe.

The image on the left was taken on August 19 1942, and shows Raymond being presented with the Croix de Guerre for his part in the Dieppe raid. Rene Taverne stands immediately to his left (on the right in the picture).

The other is of a plaque at Sainte-Marguerite-sur-Mer, near Dieppe, which commemorates the participation of three Free French commandos — Rabouhans, Taverne and Francois Baloche — in the destruction of the Hess battery. This was unveiled in 1996. 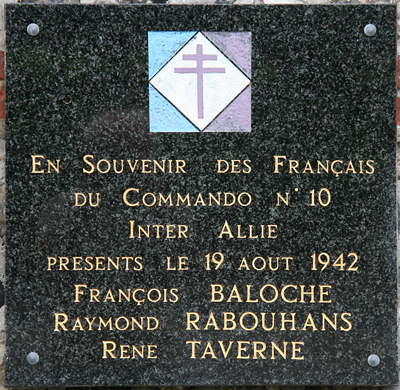 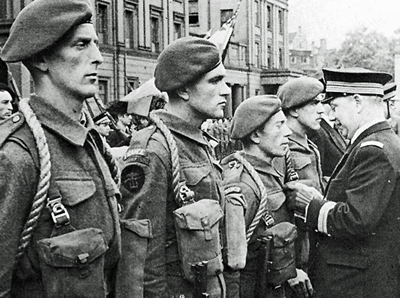