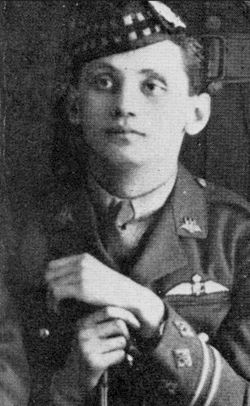 A HELENSBURGH man was a World War One flying ace and won two medals for gallantry . . . at the age of only 20.

But Captain George Edwin Thomson lost his life in a flying accident in England just a few weeks later.

He was born in Rangoon, Burma, on September 19 1897, the only son of James Thomson and his wife Ellen, of Glenfuccan, Helensburgh, when they were in Burma where Mr Thomson worked.

George was educated at Helensburgh’s Hermitage School, then at Allan Glen’s School in Glasgow and Glenalmond in Perthshire.

After leaving school he studied at Glasgow University with a view to a career in the Civil Service.

When World War One broke out in 1914 he obtained a commission in the King’s Own Scottish Borderers, and in September 1916 he became attached to the Royal Flying Corps, which two years later was to become the Royal Air Force.

During flying training he was badly injured in a crash and it left him with a permanently scarred face. He became a Flying Officer with a temporary rank of 2nd Lieutenant on December 30 1916.

In August 1917 he joined 46 Squadron in France, flying Sopwith Pups and then Sopwith Camels, and on November 23 he was promoted to Captain and Flight Commander.

During his service in France he brought down 21 German machines. During March 1918, he scored 15 victories in that one month alone — with four in one day — taking his total to 21. Of those, 11 were single-seater fighters. He was by now a leading Sopwith Camel 'ace' with only 16 Camel pilots scoring more victories.

On March 25 he was posted to the Home Establishment and on April 28 he was appointed second in command of 7 Training Depot Station at Feltwell in Norfolk as an instructor, having just gained his first bravery award, the Military Cross, for conspicuous gallantry and devotion to duty.

The citation, published in the London Gazette on April 22, stated: “On one occasion, when testing his machine, he observed a hostile two-seater machine between himself and the lines. He dived on it and fired sixty rounds at a close range, rendering the observer insensible.

“He then pulled up under the tail of the enemy machine, fired another thirty rounds, and observed it going down in a slow spin. He has accounted for six enemy machines, and has rendered continuous galglant and valuable service.”

On June 22, a month after his death, the London Gazette confirmed that he had been awarded the Distinguished Service Order, again for conspicuous gallantry and devotion to duty.

The citation stated: “On one occasion, encountering a number of enemy two-seater planes, he dived on one of these and sent it down in flames.

“On returning to our lines, he dived on to another enemy machine, the observer of which was seen to collapse in his cockpit, the hostile machine going down completely out of control. 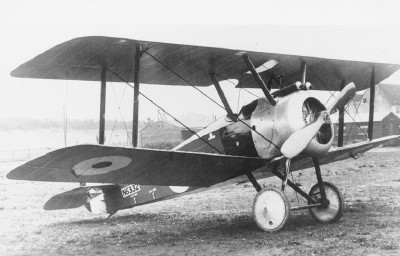 “On the following day, observing a hostile two-seater machine, he dived on it, engaging it at 100 yards range. On the hostile plane going down in a slow spin, he followed it to within 2,500 feet, but was compelled to withdraw owing to heavy machine-gun fire from the ground.

“He has, in all, accounted for 21 enemy machines, and has at all times during recent operations displayed the most marked skill and gallantry.”

He came home on leave, and the Helensburgh and Gareloch Times reported: “A vast amount of satisfaction has arisen in the town, especially amongst those who took a leading part in the welfare of the Helensburgh Swimming Club, that one of their number, now Captain George Thomson, KOSB RAF, has the proud distinction of wearing the ribbon of the DSO, also the ribbon of the Military Cross.

“Captain Thomson, who is at present staying for a few days of his well-earned furlough with Mr and Mrs Joseph Buchanan, Windsor Terrace, has only been some nine months in France, and in the course of his sojourn has had many thrilling adventures.

“On three occasions his own machine has come to grief, but he safely returned and landed in his own lines.

“He has not yet attained his 21st birthday. As a swimmer he was in the front rank of the many young men who were members of the club the year the war broke out, and many exciting races were seen at the pier.

“With the progress he was making there is no saying what honours he might have achieved in this branch of healthy sport.

“We understand Captain Thomson is to be retained in London as a lecturer on aviation in warfare. His many friends in town have congratulated him on winning such high military honours, and wish him good luck.”

Sadly he had very bad luck. On the evening of Thursday May 23 1918 he was on his way to a camp in the Midlands and landed at Port Meadow, Wolvercote, near Oxford, to take on petrol.

Port Meadow had been used as an airfield since 1911 and was formally established as a flying training aerodrome in 1916 for the Royal Flying Corps. Over two years of training use, 14 pilots and aircrew were killed in flying accidents. 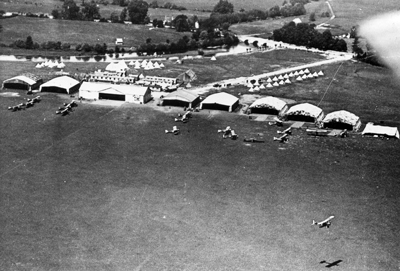 One of them was Captain Thomson, at the age of 20. Shortly after he took off his single-seater Sopwith Camel F1 D9545 plane was seen to crash to the ground and burst into flames, and he was killed instantly.

Although it was quite a difficult aeroplane to handle, in capable hands the Sopwith Camel was an agile, highly manoeuvrable biplane introduced from June 1917. It rapidly made its mark, accounting for more aerial victories than any other Allied aircraft during World War One.

Over 5,400 were built and it is credited with destroying at least 1,200 enemy aircraft. The plane, in jest, was said to offer a choice between “a wooden cross, red cross and a Victoria Cross”.

Captain Thomson operationally flew four different Camels in March 1918 when he scored his 15 victories. He engaged various types of German aircraft between his first victory on September 25 1917 — his only one in a Sopwith Pup — and final one on March 23 1918 before he was posted home to England.

The Oxford Journal of May 28 reported the inquest held by Coroner A.H.Franklin. Sergeant H.W.Jaggard, RAF, said the deceased officer landed on Port Meadow about 11.15 and said he had come from Norfolk and required petrol.

Before starting the machine was tested and found to be in order.

Witness watched him in his flight for a time. At a height of 600 feet the machine burst into flames, and the last the witness saw of him he was side-slipping down; then he passed out of sight.

Witness got an ambulance and went to Pixie Meadow, where he found the deceased under the wreckage. Life was extinct. The most probable explanation was that there had been a backfire in the carburettor.

Captain Charles Courtneidge, who identified the body, said that the deceased was an experienced pilot, and it was very unlikely the accident was caused through any mistake.

Dr Kemp-Bourne said that the body was very badly burned and otherwise injured, and was probably killed by the fall. The jury returned a verdict of 'Accidental death'. 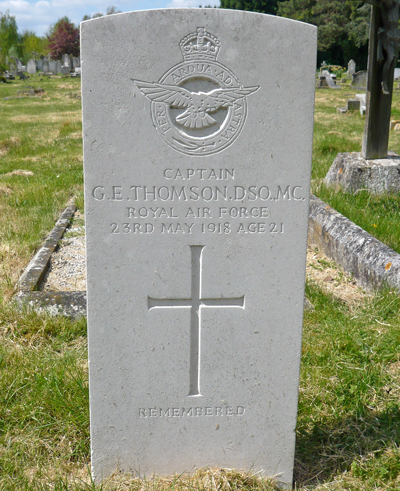 He was buried at Wolvercote Cemetery, Banbury Road, Oxford. The gravestone states wrongly that he was 21.

Reporting his death, the Helensburgh and Gareloch Times stated: “Captain Thomson was an excellent swimmer, and a prominent and successful competitor at galas of the local Swimming Club. He was also a fine rugby player.

“Only last month Captain Thomson paid a visit to Helensburgh. He resided with Mr and Mrs Joseph Buchanan, and they, as well as his other friends in town, deeply regret the loss of a young life full of rich promise.”

Two books by Arthur Gould Lee — 'No Parachute' about his time in 46 Squadron in 1917, and 'Open Cockpit' about his World War One career — include mentions of Captain Thomson and give an insight into his life of danger.

Mr Lee tells of him being referred to as “cheerful Thomson, Scot who’s had a crash that has scarred his face”, and said that average life expectancy for the pilots throughout 1917 was six weeks.

The squadron, based at Bruay, conducted offensive patrolling along the front or deeper behind lines, flying up to 22,000 ft without oxygen, using Sopwith Pup Scouts which were already on the brink of being obsolete and inferior to German Albatross aircraft.

They moved to a new base at St Marie-Cappel west of Ypres, and on the way they stopped at St Omer with low cloud and wind.

The book records: "Thomson came in too low over a Bessonneau hangar and a gust forced his plane on to its canvas roof. His wheels sunk well into the canvas, but instead of somersaulting, he just bounced off and made a second landing on the ground. Somehow it looked perfectly normal."

On September 3 during the third Battle of Ypres the squadron engaged with the Red Baron's Circus and the Baron himself in his new all red triplane. Captain Thomson was badly 'shot about' on both his patrols, one bullet grazing his temple. These were his first two engagement since joining the squadron. 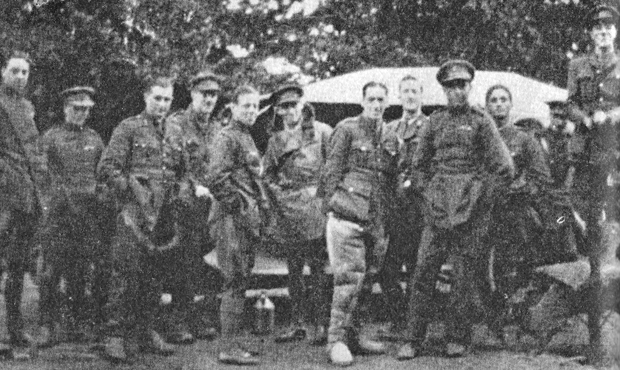 On Sunday November 11 he was one of four pilots who attended a nearby gymkhana organised by the 51st Highland Division, and they did stunt flying, including rolls and loops, for ten minutes before going to watch the horse racing.

By the end of November the squadron was heavily involved in low level bombing under ground fire from soldiers and anti-aircraft artillery, and the pilots found this very stressful.

Mr Lee writes: “Even Thomson is feeling it, and nobody in the squadron has more guts than him.

"Thomson had a nightmare requiring three colleagues to wake him, where he dreamt he was falling in a burning plane — a 'flamer' and one on the most common fears of WW1 pilots, as no parachutes were issued. They often took service revolvers or automatics with them to give them a death choice."

The squadron's second highest scorer with 21 kills, he returned home in March 1918, two months after his last victory, but was killed in a way he always dreaded, his plane bursting into flames seconds after take-off from Port Meadow, a refuelling stopover while on a cross country flight from Feltwell in Norfolk where he was second in command of 7 Training Depot Station.

At present a group of Oxford people are campaigning for a new World War One memorial, on which he would be named, to be erected next to the site of RFC/RAF Port Meadow. They have decided on the form and site of the memorial, and need to raise around £8-10k for the memorial and interpretation panel.