Flying boats flew from the Gareloch but were not suitable for every type of trial, so the Marine Aircraft Experimental Establishment had aircrew and land planes at the Ayrshire town, maintained by Scottish Aviation.

Both bases answered under a corporate banner to the Ministry of Aircraft Production but came under control of the commanding officer at RAF Helensburgh, which also worked closely with Scottish Aviation at Greenock and Largs flying boat bases.

Bomber Command was reluctant to release aircraft away from operations, even for secret work through official channels — and Barnes Wallis had difficulty obtaining a Wellington for his legendary bouncing bomb trials.

But Barnes pointed out there would be no Wellington bombers but for him, as he was the actual designer of the Wellington’s unique geodetic structure.

As a result a Wellington was allocated to RAF Helensburgh but it was a somewhat tired patched up example.

Tanner was not impressed when he found that the long door on which he sat tried to open during bumpy flight. A faulty latch was to blame, which he found ‘alarming’.

Despite his pilot skills, Carswell found X3809 difficult to handle, particularly on landing as the flaps did not slow the aircraft enough. He immediately stormed off to see the man in charge at Scottish Aviation.

He complained that X3809 was not fit for purpose. It was patched up once more before being replaced by Wellington X3446 in which Tanner also flew with Carswell.

Helensburgh’s Walrus seaplane transported people like Tanner to Prestwick and back.

Tanner, the senior armament officer, said: “Not too many people from Helensburgh went to Prestwick as it was self-sufficient. Mostly specialists and scientific staff went who were involved with trials.

“Back at Rhu everyone was busy with their own flying boat duties. I went to Prestwick regularly to fly often with Carswell.

“I remember one particular trial with him in X3446 at night. We dropped flare flame floats at night out at sea. However a change of wind blew them in towards the coast.

“Approaching Prestwick we were alarmed to see the whole area illuminated from above despite its lights being off!”

Another MAEE Wellington was the much-modified BJ855 which was used for bouncing bomb trials. It was flown on occasions by Vickers chief test pilot Matt Summers with Barnes Wallis observing.

Government film of BJ855 during the Highball trials featured in the popular post war film ‘The Dam Busters’, but BJ855 never had a credit for its starring role.

After the bouncing bomb trials it was converted back to a trial aircraft for use by RAF Helensburgh.

After the war BJ895 went to a gunnery school and crashed killing near Scarborough in 1946, killing its crew. A training exercise with a Spitfire was taking place when the Wellington went into a steep dive.

The accident inquiry noted that handling problems had been reported following its conversion back from the Highball trials and had involved the re-fitting of the bomb doors.

The Wellington should not have been flown that day, the report concluded.

Flying accidents were a constant danger, even during short flights.

Walrus L2179 (pictured above) crashed returning to Rhu from Prestwick on July 17 1942 during final approach An aircraftman was killed.

MAEE photographer Bob Bird flew in various types of aircraft from Prestwick and in flying boats from Helensburgh.

A highlight was his first flight in a large four-engined Halifax . It was to drop 4,000 lb high capacity anti-submarine bombs on Helensburgh’s bombing range off Lady Isle in the Firth of Clyde, two miles south of Troon.

The bomber station was conducting air sea rescue trials. Bob and Vince stayed the night in a local hotel but did not find guests and staff too sociable — “probably because we were strangers wearing civilian clothes and did not say what we did,” Bob wrote in his diary.

Bob’s last flight in the Halifax was particularly memorable as the pilot made a low detour swoop low over Rhu and Helensburgh.

This was most certainly against regulations, and more out of the pilot’s devilment to show off his handling of the large bomber.

Bob said that people in the streets looked up in surprise and the pilot got away with it. This dare devil and exhilarating experience inspired his Christmas card portraying the Halifax as a ship of the air. 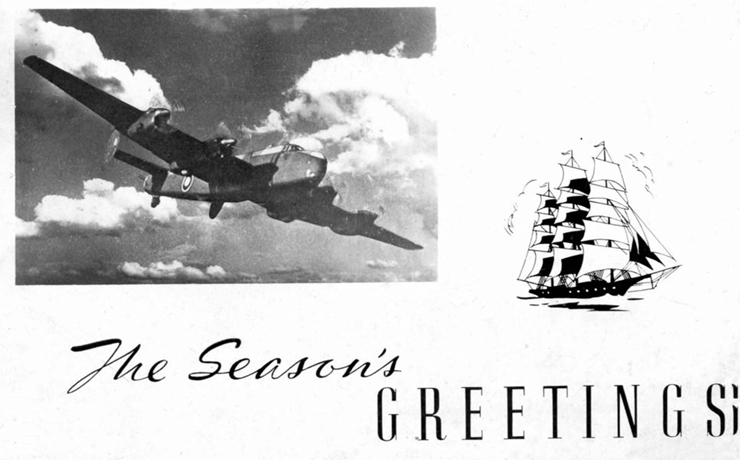 MAEE and Carswell continued with depth charge and highball trials after RAF Helensburgh closed in September 1945 and the establishment returned to Felixstowe where it had been before the war.

This was during October 1945, just a month after war had ended. A depth charge went off prematurely when the aircraft was 50 ft above a rough sea, causing damage that resulted in the fatal accident.

The trial was being recorded and the tragedy captured on film, and it is now on record.

Ironically, Sparkes was the only survivor when a Lancaster crashed over France during a bombing raid in 1943. He escaped back to Britain and was taken off operations and posted to RAF Helensburgh for the duration.

Squadron Leader Tanner was scheduled to have flown with Carswell that fateful day. He was still carrying out MAEE duties in Scotland but was unexpectedly kept at Felixstowe.

He leaned on the telephone of the crash and death of his friend Stu.

“‘Stu was an accomplished pilot who could fly just about any aircraft,” he said. “Usually he did not have to consult the pilot’s flying instructions — but I always felt safe with him.”