OF THE scores of flying boats and seaplanes belonging to RAF Helensburgh during World War Two, only one remains today.

In keeping with a cloak and dagger past, the aircraft is now on public display with a new name and civilian identity.

These aircraft did not survive the war, but Sunderland K4774, the first Sunderland built, deserves special mention.

It was RAF Helensburgh’s long-term trials aircraft, but it disappeared off Helensburgh’s books in 1944 after an accident, presumably worn out and not worth repairing.

From April 1938 this prototype Sunderland helped developed future Sunderlands up to the last Mark 5 and subsequent Seaford.

The Saro Lerwick crashed with a terrible loss of life following take off from Rhu. Its crew had proven for once and all that the troublesome Lerwicks were not fit for purpose, and they were withdrawn from operational squadrons.

The cloak and dagger story starts with a factory fresh Sunderland (pictured above after the war when it was being used as a commercial aircraft) flown by Flight Lieutenant Harold Pipes.

Test pilots with MAEE kept flying logs, although details were brief as they had signed the Official Secrets Act.  Only those who needed to know knew what the trials were for. 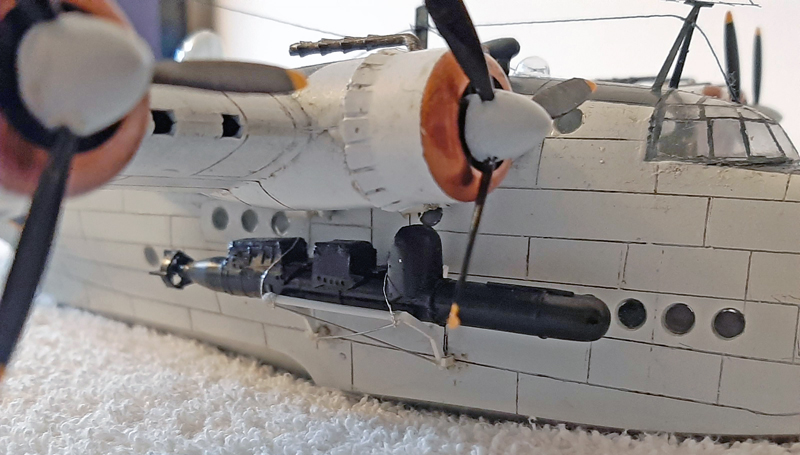 MAEE researcher and author Robin Bird, whose father Bob was the photographer at Rhu for two years, said: “We now know that ‘Lumps’ were human torpedoes, or chariots.

“The plan was to attack the massive German battleship Tirpitz with Sunderlands equipped with these miniature submarines.

“Each Sunderland would have two chariots, each manned by two submariners. They would fit mines to the hull of the Tirpitz, which was holed up in a Norwegian fjord.

“In the confusion that would follow they would make their escape — to be picked up by the waiting Sunderlands.

“While known as ‘Lumps ’ at Helensburgh, in official reports the chariots were called ‘objects’. No photographs were released of the trials, but fortunately, there is one of Pipes powering a take-off in JM714.”

A winch mechanism under each wing of the converted Sunderland released the chariots.

During the mission the submariners would then have to sneak into the well protected fjord at night — presuming and hoping that the sound of 20 engines on the five Sunderlands had not alerted the Germans.

A model (above) made by Graeme Stewart illustrates how the chariots were attached, and a photograph (right) was taken of a BBC commentator watching a demonstration of the mechanism under the wing. 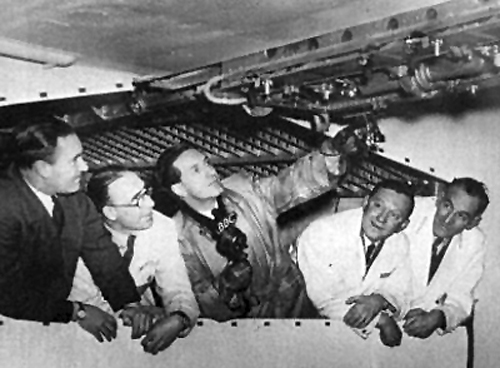 Robin speculates: “This photograph may have been staged in advance as a propaganda exercise, because if Tirpitz had been sunk the story would have made headlines similar to the Dambusters raid.

“Winston Churchill and the Admiralty had made the destruction of Tirpitz a priority after Bismarck sank HMS Hood. Its sister ship Tirpitz, could have caused havoc at sea.”

JM714 was converted first and tested by Pipes. Flight Lieutenant Knight was co-pilot and Mr Taylor, an MAEE boffin, the observer.

Weight and fuel consumption were considered during initial trials. Each Sunderland on the actual mission would carry two chariots, submariners, a handling crew and extra fuel for the return from Norway.

This was in addition to the Sunderland’s crew, so it would be substantial extra weight.

JM417 arrived at Helensburgh early July 1943. G was immediately added to the serial number and stood for Guard At All Times.

The weight of the Sunderland was kept to a minimum, with all armament removed. The trials were successful as human torpedoes were launched off Bowmore, Islay. Take off time was recorded as 83 seconds over two miles.

However, the exercise was ‘trial by air and sea’ the MAEE’s motto. On occasions the charioteers became separated from the chariots after being dropped into the sea. One had to be rescued by a RAF launch.

Meanwhile RAF Helensburgh was extremely busy. It was concurrently working on three ways to sink Tirpitz — human chariots, Barnes Wallis Highball bombs and the newly invented Johnny Walker bomb. This was on top of other tests.

The Highball attack on Tirpitz never happened as the Dambuster raid took priority. The Sunderland attack was then deemed too risky by the powers that be, with the deciding factor being when Tirpitz was moved further away and out of range.

In the end Bomber Command sank Tirpitz during November 1944 with Tallboy bombs, and Johnny Walkers were also dropped.

While the chariot mission was aborted by the Admiralty, the trials were deemed a success by RAF Helensburgh. The Sunderlands approach and subsequent escape with the charioteers carried too many risks.

While JM714G was used exclusively for ‘Lump’ tests, Pipes was also kept busy with additional duties. They included altitude tests in Sunderland JM681 and rocket projectile trials in a Catalina.

Once Helensburgh received official confirmation that the chariot mission was aborted, the five new Sunderlands were mothballed.

They never saw squadron service and languished in storage at Wig Bay until the end of the war.

The Sunderlands spent another 20 months in Wig Bay in mothballs. Then in 1947 they were converted from military aircraft into luxury flying boats for paying passengers.

The gun turrets were removed, the body lines sculptured, new engines fitted along with comfortable seating and larger windows were installed for fare paying passengers.

They caught the last days of the flying boat era before airfields cornered the passenger market, flying countless miles all over the world for numerous operators.

Only JM715 survives today but not as a Sunderland — it is on display as a ‘Sandringham’. From New Zealand this Sandringham had made regular commercial flights to Australia. Various other operators then flew JM715 under different names and flags.

In 1954 it was nearly written off in a taxiing accident on Sydney Bay while carrying passengers. After being repaired it made its way back to the UK where it was used for conducted sight-seeing trips from Calshot and over Ireland.

By 1981 JM715 faced being scrapped, but it was saved by enthusiasts and the Science Museum, and it is now an exhibit at the Solent Museum in Southampton.

The ex-JM714 plied flew for a Norwegian company and then for Almirante Zar in Argentina where it was scrapped in 1967.