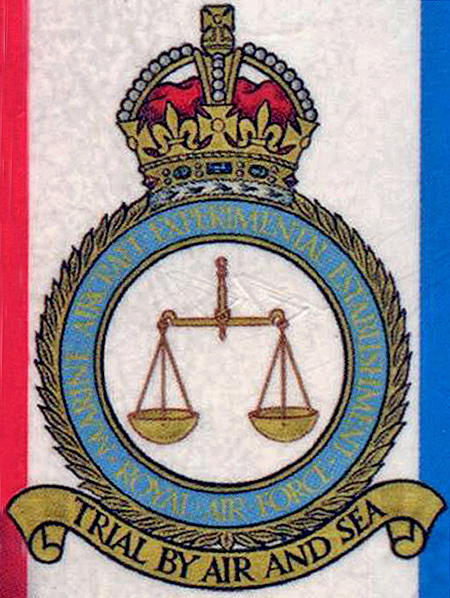 ARTISTS, photographers, wordsmiths, all had a role to play at RAF Helensburgh during World War Two.

Home to the Marine Aircraft Experimental Establishment, it was the country’s only flying boat base devoted to testing ways of waging war against U-Boats.

MAEE produced hundreds of reports on this subject. They covered types of flying boats, weapons, air to sea radar, as well as air sea rescue techniques.

These reports were concise and simple to understand, albeit technical and classified. They were read by hands-on tradesmen, test pilots and aircrew, right up to desk-bound Ministry officials.

They were studied before decisions were made that would affect lives, both of the Allies and enemy.

Barnes Wallis’s findings on his bouncing bombs were contained in MAEE documents, and RAF Helensburgh hosted his Highball trials.

Boffins at Helensburgh, the scientific and technical people, all put their findings down in complicated graphs, charts and jargon. Completed reports were then simplified for further reading and acted upon.

Many MAEE reports exist in the National Archives at Kew in London, but others have been lost in time. Photographs added to reports were worth 1,000 words or more.

Born in 1914 and educated at Sefton Park Junior School, Liverpool, he gained a place at Bristol School of Art at the age of 14. Three years later he became an apprentice in a studio designing advertising and packaging.

In 1939, he joined the RAF and was posted to Helensburgh where he was required to turn draughtsman’s plans into illustrations for reports. These enabled engineers, fitters and other personnel to see at a glance what was required of them.

Off duty Alfred found time to paint, taking inspiration from local landscapes including Loch Lomond and Loch Awe. In 1942 his painting Winter Snowscape was accepted by the Royal Scottish Academy. 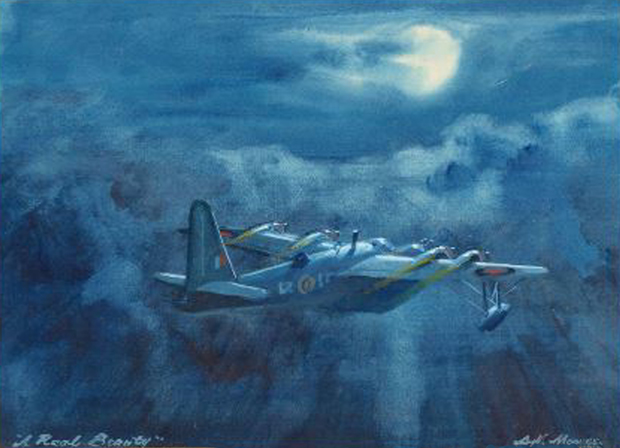 A painting of a Short Sunderland flying boat (above) was among his wartime paintings, and it is known that he hung aircraft paintings in his accommodation for colleagues to enjoy.

By autumn 1942, the happy time for the U-Boats was coming to an end in the Atlantic, as technology was taking its toll of the ‘grey wolves’.

Working at other locations Moores carried out similar projects for the Second Front and in between times he decorated many an airmen’s mess with dramatic panels of aircraft in action. Four of these were exhibited in the National Gallery in 1944.

Near the end of the war he was in Rangoon when the Japanese surrendered, and there his paintings were influenced by oriental scenes.

After the war he became a full-time artist and member of the artistic group Bristol Savages, serving as president in both 1960 and 1970.

His paintings continued to be exhibited including at the National Gallery, and his lectures explored the link between photography and art.

His paintings occasionally come on to the market today. Jorgan Ryygaard MD in Denmark contacted Helensburgh Heritage Trust about his painting of a Blenheim bomber by Moores — which he may be prepared to sell.

There is no doubt that the landscapes around Helensburgh and Rhu inspired those serving at RAF Helensburgh between 1940-45.

Lifelong memories of a picturesque location contrasted memories of a cold, harsh time away from loved ones. Many serving at Helensburgh came from warmer in the south of England, or from locations such as Australia and South Africa.

For some frost and snow were a novelty, but weather could play havoc at a flying boat base. Morning ice, for example, on March 15 1944 caused a fatal aircraft crash.

Photographers also had a role at RAF Helensburgh.

MAEE author and researcher Robin Bird’s photographer father Bob worked at MAEE, and he and his bride Thea spent their honeymoon in the town. The picturesque west coast contrasted with her blitzed home town of Liverpool, where Thea was a firewoman, and she brought home a painting of Loch Awe as a souvenir.

Loch Awe was used as a secret location by RAF Helensburgh for testing the two man ‘human’ torpedoes used to attack the German battleship Tirpitz. MAEE was given a new Short Sunderland 111, JM714, which dropped them at sea during trials during 1943. The test pilot was Flt Lt Harold Pipes, and Sub Lt Lees, an experienced charioter and RAF Helensburgh scientist, took part.

However, it was decided not to use this method of delivery as it was considered to be too risky.

Photographs were used in reports and authorised publicity. Bob’s once top-secret photographs taken at Helensburgh are now also in the National Archives at Kew.

Just prior to D-Day Bob was posted to the Airborne Forces Experimental Establishment to photograph airborne preparations for the invasion.

Here he was reunited with Neil Morris of Morris Furniture, who travelled south from Glasgow to help fit wooden rotor blades on an experimental flying jeep.  Morris Furniture supplied MAEE with bespoke items such as wooden cases for Highball bombs and scale models of the world’s first jet seaplane fighter.

Shortly after this meeting with Mr Morris, Bob met his son who served in the RAF. He had supervised the Luftwaffe pilot who brought over the captured Focke Achgelis Drache — the first helicopter ever to cross the English Channel.

At Helensburgh Bob’s replacement photographer was American Thomas Elwell. He returned to civilian life in the USA after the war to edit Leica’s Photographic Journal.

As a civil servant at RAF Helensburgh Elwell applied for permanent status to live in the UK. His application went before a board made up of senior civil servants and RAF officers.

There was a lot of red tape to overcome to obtain this hearing, and Elwell found this frustrating.

At the hearing he was asked by an officer: “What do you think of the civil service?” Elwell looked at the clock on the wall. It was ten to one, and he said: “Gentlemen if I expressed myself fully you would all be late for lunch.” The officer replied: “Well, briefly then?” Elwell said: “It stinks!”

His application was refused, and he returned to the States after the war.

Edna McClaren, a scientific officer at Helensburgh, remembers one amusing sketch coming out of the drawing office. It was of a Short Sunderland flying boat — and the fuselage was a pair of bagpipes!