A HELENSBURGH man lost his life piloting a bomber in a night raid on the industrial Ruhr area of Germany during World War Two.

John Ralph Hubbard, known to all as Johnny, was 27 when his Manchester bomber L7518 on a mission to Essen was shot down by a night fighter and crashed near the village of Warmenhuizen in the north west Netherlands on the night of Wednesday March 25 1942.

Johnny was born at Ardenclutha, 35 Upper Adelaide Street, on March 18 1915, the son of naval architect — later aircraft factory manager — Robert Sowter Hubbard from Worthing in Sussex, and Marian Stevenson Steel, who married in Glasgow on April 15 1909.

A Sergeant in the RAF Volunteer Reserve, Johnny was commissioned as a Pilot Officer on probation on October 15 1941.

He was posted to No.25 Operational Training Unit at RAF Finingley in the West Riding of Yorkshire, and he completed operational training on November 24. He was posted to 61 Squadron based at RAF Woolfox Lodge, Rutland, on December 2.

The Manchester was a twin-engine medium bomber developed and manufactured by the Avro aircraft company. Not built in great numbers, it was the forerunner of the famed and vastly more successful four-engine Avro Lancaster, which was one of the most capable strategic bombers of the war.

The Manchester was designed to be a capable medium bomber for the Royal Air Force to replace its twin-engine bombers, including the Armstrong Whitworth Whitley, Handley Page Hampden and Vickers Wellington.

Making its maiden flight on July 25 1939, the Manchester entered squadron service in November 1940 and remained in service until the end of June 1942. In all 202 were built before production was switched to the Lancaster.

Of the 193 operational Manchesters, around 80 were lost in action, and another 50 to general unreliability. 61 Squadron flew Manchesters from July 1941 until it converted to Lancasters.

The 2nd Air Gunner was either Sergeant Drake who flew the first operation or Peter Jones from Newcastle who flew on all the other operations.

December 1941 found 61 Squadron enjoying a rare quiet month, being called on only once when four Manchesters were detailed for a raid on Boulogne Docks on the night of December 7.

January 1942 was to prove much busier with 37 sorties being flown, two of them by Johnny’s crew.

The first of these was on January 9 as six Manchesters of 61 Squadron joined a force of 31 aircraft to bomb Cherbourg Docks.

Flying R5787, Johnny, despite descending to 4,000 feet, failed to break cloud and returned to base with his bomb load still on board. This was the sole operation Sergeant Drake flew with the crew.

His crew’s second operation was on January 28, a night raid to attack battle cruisers at Brest. Despite heavy flak and searchlights the crew pressed home their attack and bombed from 9,000 feet.

The crew was engaged four times in February, including two mine-laying operations in the Terschelling area to the north of Holland.

On February 12 the crew took part in the largest daylight operation by Bomber Command. It was a day of bad weather and low cloud.

However it was also an ideal day for concealment, and because of this the day was chosen for the battle-cruisers Scharnhorst, Gneisenau and the lighter cruiser Prinz Eugen to sail from Brest to Germany through the English Channel, the so called Channel Dash.

The first Bomber Command aircraft were airborne by 1.30 and 242 sorties were flown before dark. Most bombers were unable to find the ships in the poor weather conditions and those that did bomb failed to score hits.

Johnny, flying L7473, took off at 1500 hours but having failed to locate the ships returned to base with their bomb load and landed at 1805.

On February 27 a force of 68 aircraft was despatched to bomb the floating dock at Kiel harbour on the inner Baltic and the docked Gneisenau.

The Hubbard crew was one of eight crews detailed by 61 Squadron for the evening operation. But the crew failed to locate the target and jettisoned the bomb load off the Danish coast before returning to base.

On March 10 Johnny Hubbard and his crew were detailed as one of ten crews from 61 Squadron as part of a 126-strong force of bombers despatched for a raid on Essen. Despite encountering heavy accurate flak they bombed the target from 14,000 feet and turned for home.

On landing back at base the next morning one leg of their undercarriage gave way and the aircraft was severely damaged. The crew were uninjured, but were very shaken by the experience.

Just two days later, and probably still feeling the effects of the crash, they were detailed for a raid on Cologne as part of a force of 135 aircraft.

The crew, flying L7495, took off at 1950 hours and after setting course via Orfordness Johnny began to experience trouble with the aircraft tending to stall and behave abnormally.

As this continued he decided to jettison his bombs safely about 50 miles out to sea, then set course for home. Twenty minutes from base the port engine coolant needle began flickering and the temperature began to rise.

Although nearly on track Johnny made “Darky” calls — a system of homing at night on radio bearings provided by base — and asked for the magnetic headings he should steer until he reached the Woolfox beacon.

Despite spending ten minutes in the vicinity of base calling them on the TR9 radio transceiver, he received no reply. It was later reported that his calls were received and answered, but apparently the TR9 was faulty, so he did not receive their replies.

The flame dampers on the port engine suddenly went white hot, large flames coming from the exhausts, and the aircraft began to lose height. By this time they were over Woolfox beacon at 4,000 feet and as Johnny needed no further assistance from the crew he ordered them to bale out.

Minutes later the gyro instruments ceased to function as the vacuum pump being used was on the port engine and as Johnny realised what was happening he changed over to the starboard pump, but it was too late, the aircraft having lost considerable height and control.

When the direction indicator stopped he had lost the beacon and at 2,200 feet, unable to see any flare path and still losing height, he abandoned the aircraft.

It crashed in a field eleven miles south of Wittering Aerodrome at 2202 hours.

There was insufficient evidence to show the cause of the coolant leak. It was discovered that two 1,000lb bombs and one 250lb incendiary bomb had hung up in the racks and this combined with the large fuel load made it very difficult to maintain height on one engine.

The crew all landed safely, Tom Stanley in a tree. Wireless Operator Jock Clelland was injured but flew again 12 days later so the injury was clearly not too severe.

Johnny lined up the aircraft and as he began the run in Bob Heggie, in his capacity as Air Bomber, began issuing instructions to Johnny.

Despite the heavy accurate flak bursting around them and numerous searchlights picking out potential victims, Bob dropped the bomb load and to the crew’s relief at about 2205 Johnny turned for home.

Maintaining a constant look out for enemy fighters, they crossed the Dutch border and apart from the following of searchlights all seemed well. But nearing the coast over northern Holland Peter Jones in the mid upper turret gave a warning of an aircraft approaching and immediately opened fire.

In the same instant the attacker, an Me110, also opened fire, machine guns and cannon spitting bullets and shells.

In the rear turret, Tom Stanley was confronted with a second Me110 attacking from astern and opened up at him with his four Brownings.

Seeing that the Manchester was badly ablaze and with the intercom unserviceable Peter Jones left his turret. He discovered that the aircraft was also severely damaged, badly holed, and in total disarray.

Moving towards the front he found Observer Bob Heggie slumped over his table apparently dead and the 2nd Pilot, youngster Alastair Buchan, lying in the gangway, also dead.

Johnny, although wounded, was still flying the stricken aircraft whilst Jock Clelland was still manning the wireless, sending to base.

Peter beckoned Jock to follow him to the rear where conditions were better but as Jock rose to follow him another burst of fire from the enemy fighter ripped into the aircraft and Jock collapsed over his radio.

At the same time the Manchester went into a shallow dive as Johnny, apparently having been hit again, lifted his head and ordered Peter to abandon the burning aircraft.

Clutching his parachute Peter reached the rear turret to find a wounded Tom Stanley, who, having managed to turn his damaged turret, was sitting on the floor with his overall covered in blood.

Peter, who was himself slightly injured, told Tom they had to bale out and after opening the exit door helped him into his parachute. Tom told Peter to go first and he would follow, so out Peter went. 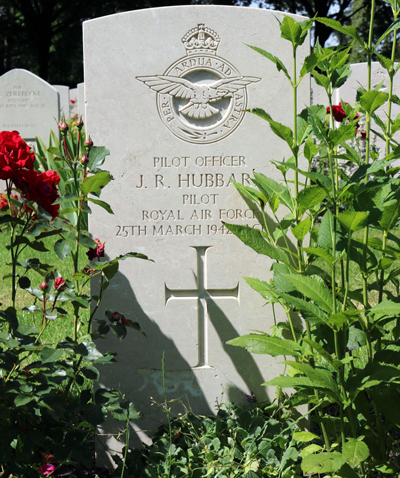 Tom then went forward again to see if he could do anything for the others, but finding all five dead, including Johnny, returned to the escape hatch in the tail section. 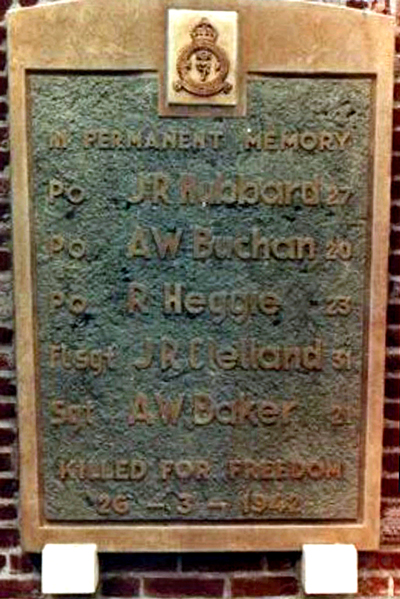 As he was preparing to bale out the aircraft turned on its side, and with the exit door now facing downwards Tom jumped . . . and instantly collided nose first with the tail fin.

Already seriously wounded and now with a broken nose and temporarily unconscious Tom fell, but luckily came to just in time to open his parachute before hitting the ground. He and Peter became prisoners of war for three years, but never met again.

Johnny, Alastair, Bob, Jock and Albert Baker were all buried in plot one at Bergen General Cemetery in north Holland, and in 2000 Tom’s ashes were interred beside his crewmates.

Johnny is commemorated on a war memorial plaque at Warmuizen (left) and on the Scottish National War Memorial at Edinburgh Castle, but is not named on the Cenotaph in Hermitage Park.

Much of the detail included in this article is by courtesy of the massive Aircrew Remembered website, aircrewremembered.com.