A TEST pilot at RAF Helensburgh during World War Two had a son who he would be very proud of. 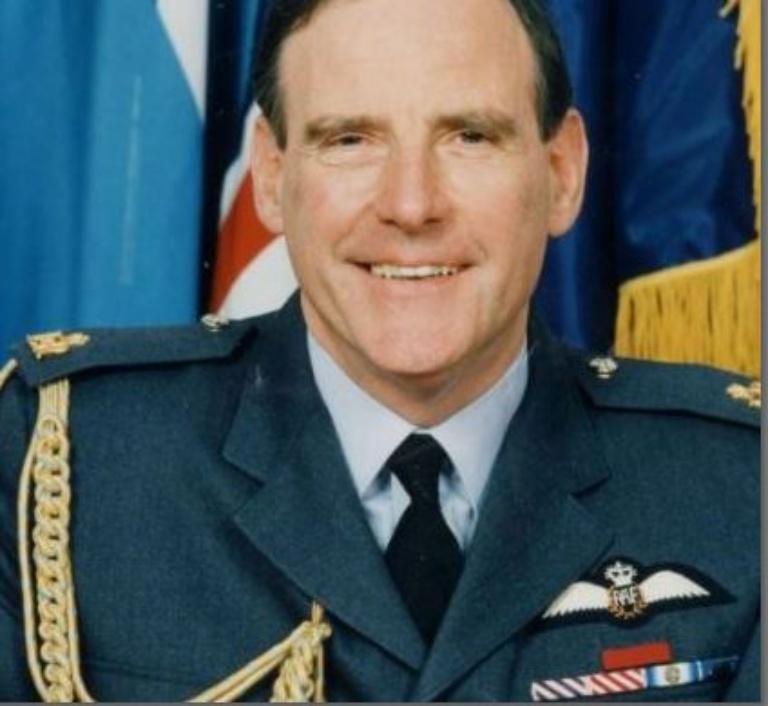 Peter (right) followed his father’s footsteps into the RAF, studying at Cranwell, and rose to the rank of Chief of Air Staff and was knighted. His career as a jet pilot included front line action and command of the Red Arrows.

His career perhaps eclipsed that of his father, but research after a request sent to Helensburgh Heritage Trust for information about his medals discovered that Frank rose to the rank of Wing Commander in a very eventful war and post-war RAF career.

Besides being a pilot of prop-propelled aircraft Frank flew early jets.

His wartime service hunting submarines qualified him for the role of a test pilot at RAF Helensburgh which had the secret role of finding ways of hunting U-Boats.

A colleague at his previous 210 Squadron commented that “Catalina pilot Squire was a modest fellow who did not mention his DFC award with 172 Wellington bomber squadron.” He was also awarded the DSO.

In April 1943 flying Catalina FP252 during a night search over the Bay of Biscay he caught a submarine in his Leigh Light and attacked. He broke off the attack after dropping a depth charges only to evade an enemy aircraft on his tail.

A report lists the submarine as U465 and the Catalina pilot Squadron Leader Squire flying with a crew of 10. It was 22.41 hours when Squire’s radar spotted the submarine.

He kept contact from about 60 ft above sea level and dropped depths charges, straddling the U-Boat. Subsequent reports indicated damage to U-465, which was repaired but was sunk the following month in the same area by an Australian aircraft.

The Air Officer Commanding, Air Marshall G.R.Bromley said of Frank, prior to his posting to RAF Helensburgh, that he had a long established and distinguished record on anti-submarine work.

He added that he had been an inspiration to his squadrons — a view endorsed by Air Marshall Sir John Slessor.

Besides Sunderlands and Catalinas at RAF Helensburgh Frank regularly flew a Supermarine Walrus from Helensburgh to Ayr.

In tests he flew the torpedo bomber Fairey Barracuda MD830 and an Albacore to drop a new type of mine, and also tested land-based aircraft based at Prestwick, kept and serviced by Scottish Aviation.

Frank also flew the Short Shetland (above), another new aircraft developed by MAEE. A hull fitted to Saro A37 at Helensburgh was used as a test bed for the Shetland project.

It was Britain’s largest four-engined flying boat when taken to Rochester for the initial flight stage with MAEE, Shorts and Saunders-Roe.

The senior boffin aboard Frank’s flights in the Shetland was technical scientist John Allen. Flight Lieutenant Russell and Squadron Leader Dennis Tanner, also ex-Helensburgh, flew in Shetland DX116 before it burnt out at moorings at Felixstowe.

A second Shetland was no longer needed for military or passenger use and was scrapped.

He was also asked to investigate the accident rate and safety record of MAEE’s test pilots. At Helensburgh there had been at least 17 deaths in flying accidents, with some aircrew injured.

When MAEE returned to Felixstowe at the end of the war he flew in a unique mode of transport — the first captured German flying boat in the hands of the establishment since 1940 and the Heinkel 115s and Arado 196.

The unusual looking three-engined Blohm und Voss 138B (above), something of an ugly duckling, was captured during June 1945. After repairs at Calshot in Hampshire and being allocated the new RAF serial number VK895 it was flown to Helensburgh for appraisal.

Frank flew VK985 over land to Felixstowe but with concerns. Those aboard were worried that the Blohm und Voss could still be mistaken for an enemy aircraft as the war had not officially ended.

The Squadron Leader was also concerned that the three Junkers engines might prove unreliable on the flight, so he took insurance with him, a Luftwaffe engineer, in the hope that the German could handle any hiccups on the way.

VK895’s trials continued at Felixstowe, and two more captured BV138s were delivered. One was used for static training without flying, the other for armament training. All three were then scrapped because spare parts were not available.

He was familiar with this aircraft as boffins at RAF Helensburgh carried out research into flying wooden scale models of the jet seaplane before the Saunders Roe A/1 order was confirmed in 1944.

When the first SR A/1, TG271, crashed at the Battle of Britain Air Show of 1949, killing the test pilot, Squadron Leader K.A.Major, Frank took over his responsibilities.