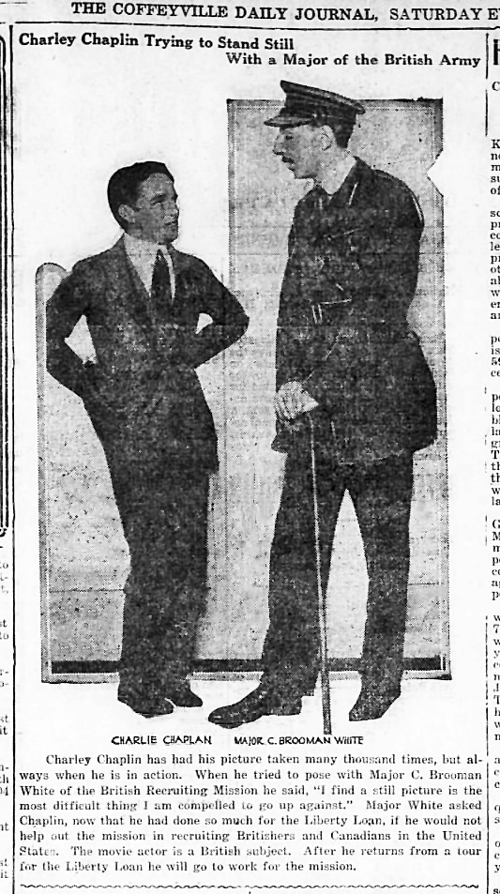 A MEMBER of a well-known Loch Longside family, who was honoured after a successful military career, also had a colourful private life.

Major Charles James Brooman-White CBE, whose son was to become Under-Secretary of State at the Scottish Office, had the odd problem with the law in his youth, was named in a divorce action, and in later life left his wife to live with another woman.

Charles was born in England on November 8 1883, the older son of Richard Charles Brooman-White JP and his wife Lily Geraldine Angela, nee Schuster, of Arddarroch, Finnart, near Garelochhead.

They had a second home at 11 Cambridge Square, Hyde Park, London, which they used for family parties and where Charles lived when in the capital for business.

His young brother, Second Lieutenant Ronald George Brooman-White, died from wounds received on the Western Front at Ypres on May 15 1915 at the age of 22. They had several sisters.

The family business was the large J.J.White & Co. chemical works at Shawfield, Rutherglen, where the main product was potassium bichromate, a highly corrosive and strong oxidising agent used in laboratory and business applications.

The enormous wealth of the owners came at an enormous cost to the workers, whose health was horribly affected by the chemicals in the air, and to the environment, which is still affected by decades of dumping of toxic waste.

Richard Brooman-White managed the company, but devoted much of his time to his hobbies, especially growing orchids. Four of the Arddarroch domestic staff of twelve worked with the orchids.

He was the first person in the district to own a motor car, and tackled the challenges faced by the motoring pioneers.

The children lived mostly at Arddarroch, and the family also had the shooting rights on nearby Craggan Farm. In 1952 the mansion and 80 acres of land were sold to BP for the Finnart Ocean Terminal.

Like his father, Charles was educated at Eton from 1897-1900, where he was noted as ‘a candidate for the Army’ despite getting into trouble for riding a bicycle on a footpath in the Reading area.

He did join up on May 15 1902 as a Second Lieutenant in the 3rd Battalion Princess Louise’s Argyll and Sutherland Highlanders, but also did six months study at Trinity Hall, Cambridge from January 1904.

On June 14 he faced trial at Bedford Borough Court for allegedly driving a motor car in Midlands Road at a speed dangerous to the public. He was found guilty and fined £15 in lieu of one month in jail.

He was cited as co-respondent in a divorce action involving the wife of a fellow officer in the Argylls in 1906, but the action was dismissed without resolution.

The following year after a whirlwind romance his engagement to 25 year-old Ida Lea Hastings of Hearne, Texas, was announced in March. He retired from the army on April 2, and they married three weeks later.

The couple lived at Arddarroch, in London and at 220 West 42nd Street, New York. He worked as a company director.

On April 28 1908 he represented a London employer, Roberts Bullock & Co., bankers, as a Clerk, providing testimony, a copy of an account record, in a trial at the Old Bailey, London’s Central Criminal Court.

His banking career in London seemed over and he gave his occupation as ‘Manufacturer – Paint’, probably a reference to the family firm.

The couple’s son, Richard Charles Brooman-White, was born in New York on February 16 1912.

The outbreak of World War One led him to rejoin the army on September 4 1914. He served in France with the Rifle Brigade as a Major, attaining the rank of Acting Lieutenant Colonel.

On September 1 1917 Charles was appointed to the newly-established British War Mission to the United States in New York as executive officer to the director, Brigadier General Wilfred A.White.

He was assigned the task of liaising with Zionist groups throughout the country, and he had to try to establish links with Jewish leaders and communities which were likely to be able to mobilise recruits for the Jewish Legion — Jews with a strong commitment to Zionism.

The recruitment officers had to reach out quickly, not only to the leaders of large Jewish communities, mainly on the East Coast, but also to leaders of smaller immigrant Jewish groups throughout the United States.

They wanted to create the appearance of a groundswell of American Jewish support for the Jewish soldiers who were going off to fight in Jerusalem and Palestine.

He travelled all over the United States making speeches, and on one occasion this resulted in a much-publicised meeting with legendary comic Charlie Chaplin, a British subject.

He asked Chaplin to help the mission to recruit Americans and Canadians, and Charlie said that when he returned from a tour publicising the Liberty Loan — part of the U.S. government’s effort to sell war bonds to defray the expense of war — he would work for the mission.

Charles was awarded the CBE on March 22 1919 for distinguished service, and he retained his commission until June 17 1941, when he relinquished it because of ill health.

After the war he returned to business in Britain and America, listing his profession as secretary or director. In October 1920 he became a director of London-based tobacco and cigarette manufacturers B.Morris & Sons.

Back in New York he was the secretary and treasurer of a horse and cattle show, and also joined fellow Etonians in proposing the establishment of an Old-Etonian club.

In the early 1930s he did not travel quite so much, and Charles, Ida Lea, and his mother Lily settled in London at 11 Cambridge Square.

Son Richard graduated with a degree in economics and foreign languages from Trinity College, Cambridge, in 1934.

In 1936 and 1937 Charles took holiday trips alone to Genoa and to Villefranche, France. Both times he gave his address as 34 Dover Street, London, although the family were still listed at Cambridge Square.

By now he was living with a younger woman, whom he later named in his Will.

From 1941 his home was at Keeper’s Cottage, Toat, Pulborough, West Sussex, a village fifty miles south of London. He also retained an address at The Bath Club in the city.

He died at Keeper’s Cottage on March 20 1954, three years after his mother died in London. He was survived by his wife and their journalist and politician son Richard.

Known to his friends as Dick, Richard was mobilised in 1939 as a second lieutenant in the Dunbartonshire Light Anti-Aircraft unit, Royal Artillery. The following year he resigned his commission because of ill-health.

From 1940 he was a desk officer for the Security Service and was put in charge of a new section of MI5 which looked at ‘Celtic movements’, dealing with Spanish espionage.

He was head of the Italian section of MI6 in 1943, and he was later moved into the field where he served in the Mediterranean and then in North-Western Europe.

After fighting the 1945 general election against James Maxton in Glasgow Bridgeton, he worked from 1946 to 1947 as an attaché at the British embassy in Istanbul, Turkey.

He became Member of Parliament for Rutherglen in 1951, and he had a successful political career until resigning in December 1963 for health reasons. He died a few weeks later on January 25.

He served in many responsible posts, with an emphasis on the Intelligence area, but also as Lord Commissioner of the Treasury and then Under-Secretary of State for Scotland from 1960-63.