VOO-DOO was used once in World War Two. Its use in 1943 is not widely known, and less so its link to Helensburgh.

‘Voo-doo’ was a Hadrian glider towed across the Atlantic Ocean by a two-engined Dakota.  The dangerous, never before attempted mission took off from Montreal in Canada.

There was a realisation that one, or both, of the fully laden aircraft might be ‘cursed’ and forced to ditched on route . . . they would mysteriously disappear, swallowed up by the grey Atlantic.

The glider’s name was Voo-Doo. It was assigned a shepherd, the Catalina flying boat FP 159, which was destined for Helensburgh. This was no ordinary ferry flight to Scotland for the Catalina crew, as they shadowed the glider for more than 3,200 miles.

They watched the tautness of the tow rope, made a photographic record and remained at hand in case a rescue was required. FP 159 was also a decoy should a preying Focke Wolf Condor attack Voo-doo, or if it came within range of U-Boat anti-aircraft fire.

Despite the bad weather Voo-doo arrived safely at Prestwick (above) that summer of 1943, and gained national publicity in Britain, America, and Canada.

However, FP 159 did not feature in the limelight enjoyed by the crews of the two other aircraft. Instead FP 159 disappeared into the cloud of secrecy that surrounded the Marine Aircraft Experimental Establishment at RAF Helensburgh.

The Catalina pilot was Captain Jerry Durrand, a regular ferry pilot, and his log was simply marked ‘special flight’. 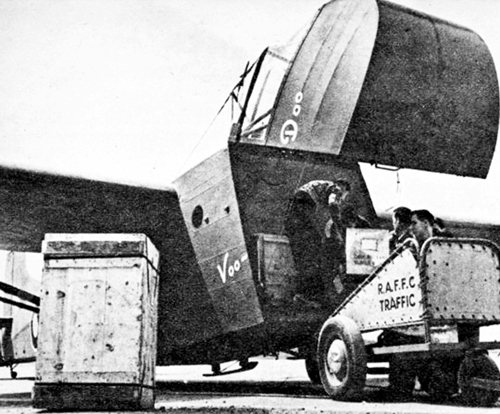 Towing a laden glider across the Atlantic had been seen as an alternative way of transporting much needed supplies to Britain. But once the cargo was unloaded at RAF Prestwick (right), Voo-doo was never used again — it was deemed too dangerous a way to transport goods across the Atlantic.

The total number of men in the three aircraft added up to an ‘unlucky’ 13. However, none seemed unduly superstitious that the glider was ‘cursed’.

Voo-Doo had a two-man inflatable dinghy in case it ditched. Hopefully, the crew would then be rescued by the shadowing Catalina.

The Catalina was being delivered to RAF Helensburgh from Canada, itself a potentially hazardous ferry flight, and left Montreal on June 23 1943.

Ferry Catalinas were not usually armed, and FP 159 is not recorded as being armed on this flight, so how it would fend off a heavily armed Condor is a mystery.

After Iceland the risk of encountering the enemy increased as the trio crossed the Russian convoys route and onwards to Scotland. After the Hebrides they encountered barrage balloons and flew to avoid the 350 ft long tow rope getting caught up in one.

At Prestwick, in cloud, Voo-Doo was cut loose at 5,500 ft. The glider made a perfect landing in front of the welcoming crowd and media.

One and a half tons of freight was removed from the glider — including some bananas, not easily available in wartime Britain. After the publicity and debriefing the three aircraft went their separate ways.

The snow-white Catalina FP 159 went on to RAF Helensburgh, and Captain Durrand returned to ferry another aircraft. He brought various types of aircraft to Scotland besides Catalinas.

Born in New Zealand in 1905, Durrand enlisted with the Royal New Zealand Air Force after being on the volunteer reserve while conducting ferry flights.

He then saw active service in Europe, Burma and the Middle East, serving both as a navigator and pilot.

He was promoted to the rank of Flight Lieutenant and awarded the most excellent Order of the British Empire. He was commended for organising ferry flights, particularly in monsoon conditions.

In 1944 he was shot down and crash-landed amid a tank battle — but his navigation skills got him back to Allied lines in two days.  He married in his homeland and returned there after the war. He died in 1968.

No photographs of FP 159 are available, except during rocket projectile trials at RAF Helensburgh.

MAEE armament officer Dennis Tanner travelled from the Marine Aircraft Experimental Establishment in Rhu to Boscombe Down in Wiltshire for a briefing on this new top-secret weapon, unrotating missiles, code name VP.

“These rockets did not rotate when launched but were guided by fin-like arrows,” said Tanner in his notes.

Flight Lieutenant Harold Pipes conducted the rocket projectile tests in FP 159, but damage kept resulting to the underside and fuselage of the aircraft. As a result, forward firing rocket projectiles were not used on Catalinas.

After Helensburgh, FP 159 was used operationally with various squadrons and was scrapped in 1946. The Dakota was taken over by the RAF glider regiment and crashed in March 1945.

The glider did not escape the Voo-Doo curse completely, as it crashed while being towed to be displayed at the British Museum and was wrecked.

A length of tow rope is held by the Imperial War Museum — the last tangible link with Voo-Doo.