A HELENSBURGH man was one of the ship’s company declared ‘missing believed killed’ when the battlecruiser HMS Hood was shelled and sank on May 24 1941.

The sinking by the German battleship Bismarck was one of the largest World War Two losses of life for the Royal Navy, and it sparked a huge pursuit of the Bismarck, which was destroyed three days later. 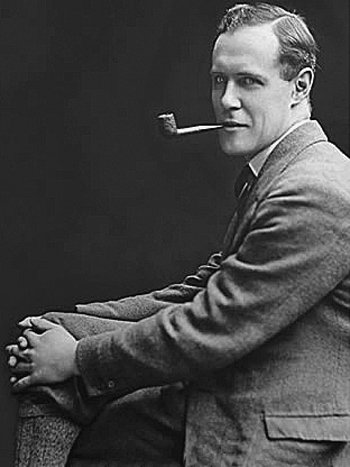 He is not named on the Cenotaph in Hermitage Park, but he is remembered on the Portsmouth Naval Memorial on Southsea Common.

John George Plunket Brownrigg was the oldest of four sons of the Rev Robert Brownrigg, vicar of St Lawrence Church in Lechlade, Gloucestershire, and his wife Mary McAllum.

He entered the Royal Navy after the First World War and attended the Royal Naval Colleges at Osborne and then Dartmouth as a Midshipman in September 21.

From April 1922 to August 1923 Midshipman Brownrigg served on the light cruiser HMS Capetown, then attended a promotion course at the RN College at Greenwich before joining the sloop HMS Snapdragon in the Atlantic fleet as a Sub-Lieutenant. 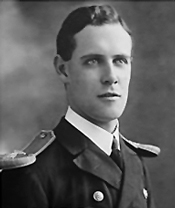 He was promoted to Lieutenant in December 1926, and from December 1927 to August 1929 he served aboard the Atlantic fleet destroyer HMS Walker, which was built at Dumbarton by William Denny and Brothers.

Next he served as First Lieutenant aboard the shallow draught river service steamer gunboat HMS Moorhen in China until February 1931.

Jack served as First Lieutenant on the destroyer HMS Westminster from September 1932 to January 1934.

He was promoted to Lieutenant-Commander in December 1934 and assigned to the newly commissioned destroyer HMS Forester the following April, serving as Executive Officer until July 1935.

His romance with Rhona Smellie, of Glenoran, Rhu, daughter of retired shipbuilder John Smellie and his wife Catherine, began when they met while playing tennis at the then MacMillan family home at Ferniegair when HMS Forester was visiting the Gareloch.

They married at Helensburgh’s St Columba Church on July 24 1935 when he was 31 and she was 26. One of the witnesses was his father, by then Honorary Canon of Gloucester Cathedral.

Rhona joined him, and their only son Terence was born there in September 1937. A year later they returned to the UK. He was assigned to HMS Hood, and his wife and son moved into Rockland.

The 42,100-ton battlecruiser, built at John Brown’s at Clydebank and commissioned in 1920, was for 20 years the largest and fastest warship, pride of the British Navy and an example of the finest naval engineering.

The last battlecruiser built for the Royal Navy, she was named after the 18th-century Admiral Samuel Hood and was used for many years for “show the flag” exercises as a show of strength. She was equipped with eight 15in guns and was capable of 32 knots.

Despite the appearance of new and more modern ship designs over time, Hood remained the largest and most powerful warship in the world for 20 years after her commissioning, and her prestige was reflected in her nickname, “The Mighty Hood”.

She was Britain’s biggest warship until the commissioning of the 65,000 ton aircraft carrier HMS Queen Elizabeth in 2018.

When the Second World War with Germany was declared, Hood was operating in the area around Iceland, and she spent the next several months hunting for German commerce raiders and blockade runners between Iceland and the Norwegian Sea.

After a brief overhaul of her propulsion system, she sailed as the flagship of Force H, and participated in the destruction of the French fleet at Mers-el-Kebir to prevent it falling into the enemy’s hands.

Relieved as flagship of Force H, she was dispatched to Scapa Flow, and operated in the area as a convoy escort and later as a defence against a potential German invasion fleet.

In May 1941, Hood, now the flagship of Vice-Admiral L. E. Holland, and the battleship Prince of Wales were ordered to intercept the Bismarck and the heavy cruiser Prinz Eugen, which were steaming to the Atlantic to attack convoys.

On May 24 1941, early in the Battle of the Denmark Strait, Hood was struck by several shells from Bismarck, exploded, disintegrated, and sank in three minutes, with the loss of all but three of her 1,341 crew.

Because of her perceived invincibility, the loss affected British morale, and the Royal Navy conducted two inquiries into the reasons for the ship’s quick demise.

The first, held soon after the ship’s loss, concluded that Hood’s aft magazine had exploded after one of Bismarck’s 15-inch shells penetrated the ship’s armour.

A second inquiry was held after complaints that the first board had failed to consider alternative explanations, such as an explosion of the ship’s torpedoes. It was more thorough than the first board and agreed with the first board’s conclusion.

Despite the official explanation, some historians continued to believe that the torpedoes caused the ship’s loss, while others proposed an accidental explosion inside one of the ship’s gun turrets that reached down into the magazine. Other historians have concentrated on the cause of the magazine explosion.

The discovery of the ship’s wreck in the Denmark Strait in July 2001 by a British deep-sea expedition confirmed the conclusion of both boards, although the exact reason the magazines detonated is likely to remain unknown since that area of the ship was destroyed. 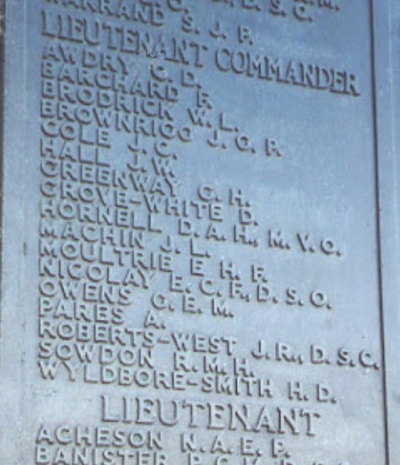 Jack’s name is remembered on the Portsmouth Naval Memorial on Southsea Common (left), at Lechlade Memorial Hall, the Brownrigg family grave at Lechlade Cemetery, and at the Hood Chapel at the Church of St John the Baptist, Boldre, Hampshire.

His widow declined the opportunity for his name to be on the memorial in Helensburgh’s St Michael and All Angels Scottish Episcopal Church as she did not think that, while she had joined the church, her husband had lived locally for long enough to qualify. She died in 1990 aged 80. 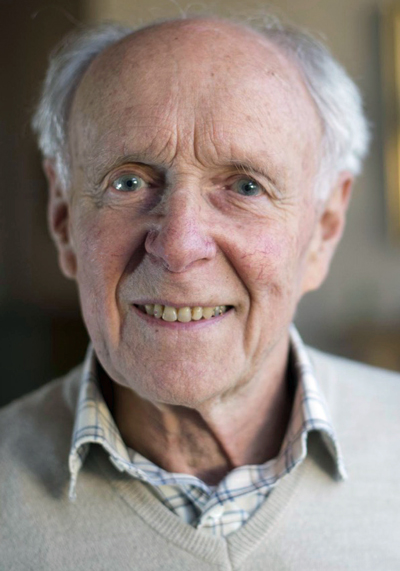 Their son Terence (right), who lives at Ardentigh, Rhu, is a well-known local man, having lived here all his life since returning from Australia in a Moses basket.

In his youth he was a keen tennis and squash player, but he had inherited his father’s love of the sea and his great interest is sailing.

A former Rear Commodore Sailing, Vice Commodore and Commodore of the Royal Northern and Clyde Yacht Club at Rhu, he made a significant mark as a competitor and official in yacht racing in Scotland and around the world as an international judge and offshore yachtsman.

In 2019 he retired as the Royal Yachting Association’s rules adviser in Scotland, his 30th year as an international judge. He received a ‘lifetime commitment’ honour in the RYA annual awards for Scotland for his dedication to the sport.

n  Some of the information in this article came from the HMS Hood Association, which was founded in 1975 in memory of the sailors who served and lost their lives on HMS Hood.