But probably not. This intrepid band of pilots at the Marine Aircraft Experimental Establishment on Garelochside did not discuss their wartime exploits.

Their demanding job at the establishment kept them focused on a potentially life-threatening occupation.

Captain Gentry made regular return flights across the Atlantic. He was mentioned in dispatches, featured in newspapers in America and Canada for volunteering for dangerous missions, and was awarded the OBE for wartime services.

He was on the first pioneering Lend Lease ferry flight across the Atlantic, bringing seven Hudson bombers to Britain in November 1940 to pioneer the Ferry Transport Command.

This historic flight braved severe storms and weather which iced wings. Ten hours and 17 minutes after leaving Gander the volunteer air crews had made it.

They had earned a place in the remarkable annals of flying, and they were the forerunners of around 10,000 much needed Lend Lease military aircraft that followed.

A year later Captain Gentry had just delivered a Consolidated Catalina to Scotland in time for Christmas Day 1941. He was about to have his festive lunch when the need arose to deliver urgent documents to Washington.

He volunteered immediately to fly the papers. Again he battled cloud, fog, winds and ice during a flight that lasted 23 hours.

Consolidated Coronado JX470 was a large American flying boat powered by four Pratt and Whitney engines. Altogether ten Coronado GR Mk1s were flown to Scotland, of which JX470 was the first delivered. 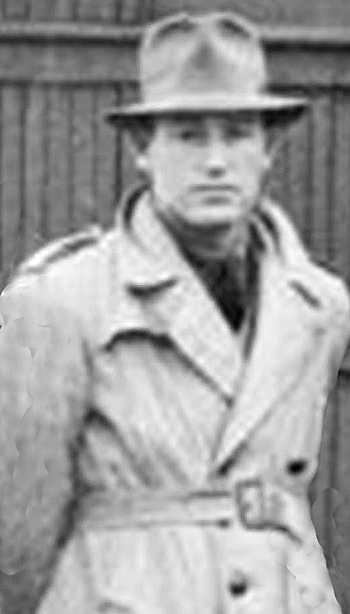 Captain Gentry (left), known to his friends as Dick, remained at RAF Helensburgh to show test pilots how to handle this new type of aircraft.

It had twin tails, electrically operated floats and four propellers, each with inner and outer propeller blades. Handling was similar to a Catalina, but with heavier controls.

RAF Helensburgh’s engineering flight officer Peter Knight flew on trials with Gentry in JX470 at 16.35 hours on May 10 and at 10.30 hours on May 11 as MAEE also assessed its water stability.

During one test JX470 ‘porpoised’ — the port wing dug into the water and the aircraft was badly damaged. Lack of ventilation on the step was blamed.

A replacement Coronado, JX 495, was altered at Helensburgh, and the ventilated step improved take off characteristics. Knight flew in this Coronado with pilot Flight Lieutenant Pipes on January 14 1944, logged as a flight to Wig Bay.

A third Coronado delivered to Helensburgh in mid-1944, JX472, was written off in a collision with Martin Mariner JX111 in September 1944.

By then RAF Helensburgh had recommended the Coronado as suitable for transport duties only, and they were allocated to 231 Squadron as transport aircraft. Between September 1944 and January 1946 they flew regularly out of Montreal to Scotland, Baltimore and Bermuda.

Captain Gentry survived the war. He lived in Canada where he died at the age of 71.

The Martin Mariner was another new lend lease flying boat type flown to Helensburgh for appraisal prior to use with Coastal Command.

The first of a small number of Mariners reached the Gareloch in September 1943. John Allen, the senior technical officer, remembered its arrival amid great security because of its secret ASG radar to seek out ships and submarines, which was mounted in dome housing above the cockpit.

The two-engined Mariner had a distinctive look and spent four months at RAF Helensburgh. It was allocated the letter G — Guard at all times — because of its secret aspects.

These included the fact that the twin Cyclone engines were unusual in having two speed superchargers.

The turrets each had a pair of Browning 0.5 guns, but the interference gear designed to prevent guns pointing at the aircraft did not always work properly.

One gun started firing at nothing when pointed, while another turned itself on to the Mariner’s fuselage. They had to be corrected before firing live ammo.

The additional 20mm Hispano gun barrel had a limited life, and Tanner stopped a test when flames staring coming from the barrel.

The Hispano was first tested at RAF Helensburgh as an anti-submarine gun on Short Sunderland K4774, when it was repositioned to allow more practical use.

However, after further Hispano testing, RAF Helensburgh recommended that the Hispano should not be fitted to Sunderlands.

Stan Sismey carried out stall tests at Helensburgh, and the handling received mixed reports. The Mariner was fitted with hot plates, fridge, eight bunks and kitchen sink for long flights.

Lowry also conducted local trials. His tests showed that Herculean efforts were needed to control the Mariner, not helped by small ailerons.

It was unusual for the commanding officer to take part in such trials, but this was probably to conclude his recommendations.

MAEE advised that the Mariner was not suitable for Coastal Command use because of the heavy handling. They were never used operationally as a result, and they were restricted to transport duties.

The top picture of Coronado JX495 was taken on a rainy day at Rhu in the Autumn of 1943. In the background are huts used by MAEE technicians. The aircraftman standing below the twin tails gives an impression of the size of the Coronado.

Another interesting picture below shows a Mariner outside one of the two flying boat hangars at Rhu. The fuselage is weather stained.

Not many images of the RAF Helensburgh hangars exist because of security. The slipway and hangars, a large C Type and smaller Bellman, were built during 1941.