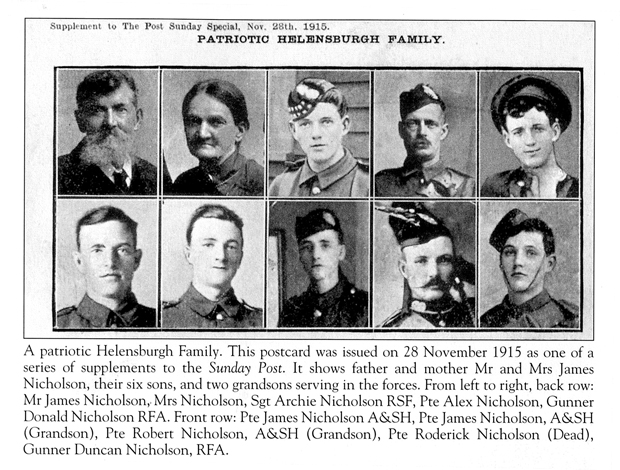 The Heritage Trust book ‘Around Helensburgh’, published in 1999, includes the picture on this page, which was from a postcard published in the Sunday Post on November 28 1915 in one of a series of supplements.

Under the heading ‘Patriotic Helensburgh Family’, it features father and mother Mr and Mrs James Nicholson, their six sons, and two grandsons.

None of them are named on the Helensburgh Cenotaph, although there is a Private Peter Nicholson who died in 1917, and no more information about the family has come to light since the book was published.

Moving on to World War Two, the Helensburgh and Gareloch Times featured the Law family of 10 West Clyde Street, commenting that Mr and Mrs J.Law had a family record of service to the country that must be hard to equal.

Mr Law himself has had 22 years service in the Royal Corps of Signals, and he is home just now on leave from service in the south of England as P.O. telephone engineer.

He suffers from a duodenal ulcer, but is returning to work as soon as possible, as he is determined to carry on till the war is over.

He is secretary to the Helensburgh Prisoners of War Association, and has been making strenuous efforts to keep in touch as far as possible with local men who are P.O.W. in camps in the Far East, over whose well-being safe home-coming we are all anxious.

Mr and Mrs Law had a family of four sons and one daughter. The daughter is married and living in England, and she is expecting her husband home on his first leave since D-Day. He has been engaged in bridge building in Belgium and Germany.

The second son, Petty Officer Albert J.Law, was killed through an ammunition explosion aboard a corvette during a raid on Liverpool. He had twelve and a half years service in the Royal Navy.

The third son, John, is a Lieutenant in the Royal Corps of Signals, and has had ten years service.

He is now in Germany at Belsen, where the notorious camp has just been razed away by fire. A few months later he was awarded the Military Cross.

Robert, the eldest son, is a Captain in the Army Catering Corps and has had 15 years service.

He had been in the Middle East and in Italy, and met his youngest brother George the day before George was captured.

They did not meet again till both were home last summer, George on his repatriation after many terrible experiences, and Robert while he was in this country on a special course.

George’s capture was due to the fact that his unit was surrounded. The Officer Commanding gave his men the choice of surrendering or striking inland, and those who chose the latter ran right into a German panzer division. This was as Foggia in May 1942.

George had been doing special interception broadcasts, and he was sent to Munich for interrogation by the Gestapo. Three times during his captivity this happened, and his experiences will hardly bear re-telling.

As they failed to get anything out of him in Munich, he was sent back to Italy.

On the train journey in Germany the train was bombed by the RAF, and of the 4,000 on it, only 35 came out alive. George owed his escape to the fact that he was blown clear of the burning train.

He had some bad burns, but these and his leg wound healed in time.

While he was in camp in Sulmona in Italy he escaped by bribing one of the guards to slip him something with which to cut through the wire fencing, but after a fortnight he was recaptured.

Most of the people could be bribed, but when he was free and in hiding this trait worked to his disadvantage, for he felt always that he was in danger of being betrayed for the sake of a reward, and the prisoners had suffered so much, and what was worst of all, from women and children even, while they were being moved about, that they were under no illusions as to what worse might be in store for them.

He made his escape a second time, along with a young Welsh soldier, and for eight and a half months they hid in the hills — through a winter, a spring and into the summer.

To keep themselves alive they stole potatoes and milked cows, and they even had to eat the raw flesh of a sheep they managed to kill, since they dare not risk making a fire to cook it.

When their clothing gave out they had to replace it with tattered cotton garments taken from scarecrows, and they had to go so long barefoot that their feet hardened like those of an Indian.

Law never had his hair cut during all these months — his beard he kept hacked short with a knife, as too big a beard might have looked suspicious.

Always the two men hoped that if they could only last out, they might contact the British forces, but the long delay at Cassino hindered this.

When at last the Canadians broke through, the two men, who walked over 480 miles and were almost too weak to move, managed to reach the Canadian lines.

The long terrible nightmare of being like hunted animals was over, though it will be long before the effects on their bodies and nerves pass away.

George was sent to Naples, and from there home to Gourock. He joined as a Regular in 1937, and went to Palestine in 1938, but in spite of all he has been through he is finishing the two years of service, and is at Berwick on a special course in preparation for duties in the war against Japan.

The Times report ended: “Mr Law lost a brother in the last war, and a brother and a sister in an air-raid in this war.

“He and his wife have good reason to feel proud of the family record of service and sacrifice, and everyone will wish them a safe home-coming for their sons.”

George’s story is fascinating, but despite many hours of research, nothing more has come to light about Robert, Albert — who is not named on the Helensburgh Cenotaph — and John, and their parents.

If any reader can provide more detail about either of these families, please This email address is being protected from spambots. You need JavaScript enabled to view it..