THURSDAY JUNE 6 2019 was the 75th anniversary of the D-Day landings in Normandy which were to change the course of World War Two.

It was marked in Helensburgh that night when the Victoria Hall hosted an anniversary concert organised by Helensburgh Rotary Club and featuring the HMS Neptune Volunteer Band and the local Military Wives Choir.

The largest amphibious assault the world had ever seen, named Operation Overlord, involved some 7,000 vessels from eight different navies, and it was preceded by thousands of air raids.

TV, radio, newspapers and magazines have been full lately of accounts of what happened in and after the landings, which themselves had the formal code name of Operation Neptune.

The first two June 1944 editions of the then town weekly, the Helensburgh and Gareloch Times tell what life was like back in the town and district while this was taking place.

Secrecy and censorship were very much greater than in World War One, when the Times would carry two or three columns worth of stories every week about local men losing their lives, being wounded, or becoming prisoners of war.

But from 1939 the slogan was “There’s a war on”, and it could take a very long time before information of this kind came into the public domain, if ever — which makes it very difficult for families researching their relatives.

The first clear indication of what was happening came in the Times of June 14, when a message from General Bernard Montgomery to his 21st Army troops was published.

“First we must thank Almighty God for the success we have achieved and for giving us such a good beginning towards the full completion of our task,” he wrote.

“Secondly, we must pay tribute to the Allied Navies and Air Forces for their magnificent co-operation and support. Without it we soldiers could have achieved nothing.

“Thirdly, I want personally to congratulate every officer and man in the Allied Armies on the splendid results of the last four days. British, Canadian, and American soldiers, fighting gallantly side by side, have achieved a great success and have placed themselves in a good position from which to exploit this success.

“To every officer and man, whatever may be his rank or employment, I send my grateful thanks and my best wishes for the future.

“Much still remains to be done, but together, you and I, we will do it, and we will see the thing through to the end. Good luck to you all.”

Minister of State Richard Law, son of Helensburgh’s only Prime Minister, Andrew Bonar Law, warned: “The war with Germany is not over. The real battle has not yet begun. Demands upon our fortitude and patience are going to be made when the great decisive clash takes place.”

In the meantime local people were going about their daily life as normally as possible.

Church services were held, the wapinschaws continued at Helensburgh Bowling Club, Helensburgh Angling Club members were out at Luss catching many sea trout.

Lawrence Olivier was starring in ‘Demi Paradise’ at La Scala Cinema in James Street; George Murphy in ‘This Is The Army’ at the Tower in Colquhoun Square.

But there were some reports of the misfortunes of local members of the forces . . .

Mrs Law is the daughter of Mr and Mrs Alexander McIntyre, Dalmally, East King Street, and was married in Park Church in January 1943. Much sympathy will be felt for her at this trying time, but it is hoped that better news may be received before long.

Wounded in action: Commando Willie Dunlop, eldest son of Mr and Mrs Dunlop, Hermitage Schoolhouse, has been wounded in action in France, and is now in a hospital in the Midlands.

He received first aid from a French family, who dressed his wound unperturbed by the fact that their cottage was being held against a German attack.

His many friends in Helensburgh will wish him a speedy recovery. His younger brother, Russell, was recently reported missing on an air operation.

Helensburgh Paratrooper wounded: Mr and Mrs Alexander Brown, West King Street, have received word that their eldest son, James, has been wounded in the left hand and arm. Following a field postcard from him, they had a letter to say his wound was not very serious, and that he is in hospital in Sheffield.

He is 19 years of age, and as he had enlisted when under age, he had to remain in this country when his unit went overseas. He volunteered for the Paratroops however, and he has been taking part in their recent actions.

Mr Alexander Brown is a police constable at Rosneath, and the family are well known in Helensburgh where their friends will be relieved that this news is not more serious.

Wounded in Burma: Mr and Mrs Hugh Jamieson, Ballycreggan, have just had word that their son, Private David Jamieson, of the Cameron Highlanders, has been wounded in the shoulder during fighting in Burma. He writes that he was fortunate in escaping fatal injuries, as he was hit by a sniper while working in a Bren gun team.

He was sent to a Base Hospital, and by a happy chance found that one of the doctors there was Dr Ian Jeffrey, son of the Rev T.Johnstone Jeffrey, formerly minister of Park Church.

Private Jamieson was on the staff of this newspaper before the war.

Mr and Mrs Jamieson were without news of their son for a number of weeks, and their friends will be glad that he is safe, and they wish him a speedy recovery.

The Times reported . . . The local regiment, the Argyll and Sutherland Highlanders, were in Italy on an invasion led by General, later Field Marshal, Harold Alexander.

They crossed the Rapido south of Cassino on May 17th, and advanced with tank support against strong resistance.

For a while the battle raged without advantage to either side, but on May 20th the Argylls formation attacked the Hitler Line in the Aquino area, and though for a while held by very heavy artillery fire, it firmly established itself on its objective, thus obtaining valuable gains alongside Highway 6 and the main railway line.

The Argylls have a great record in Sicily. The formation with which one unit was serving had to its credit the capture of Syracuse, while another battalion of the regiment took part in the forcing of the Dittaino and the capture of Biancavills.

During the North African campaign the Argylls were among the first troops in action with the First Army. Among their notable deeds was their part in the recapture of Longstop Hill on April 23rd.

The Argylls long record of service in Africa during the present war goes back to General Wavell’s first offensive in Egypt. The regiment also fought in Crete, Malaya, France and Flanders.

Back home there was sadness over the death at his home in Glasgow of Thomas Gebbie. “Mr Gebbie, who was 68 years of age, had had many years in the provision trade in Helensburgh,” the Times reported.

“He had been for ten years with Mr John Richard, 89 East Clyde Street, and prior to that with Mr William Dow, West Princes Street, and his kindly, capable ways had made him well-liked by all who knew him.

“He leaves a widow and one son, and much sympathy will be felt for them. The funeral took place to the Western Necropolis in Glasgow.” 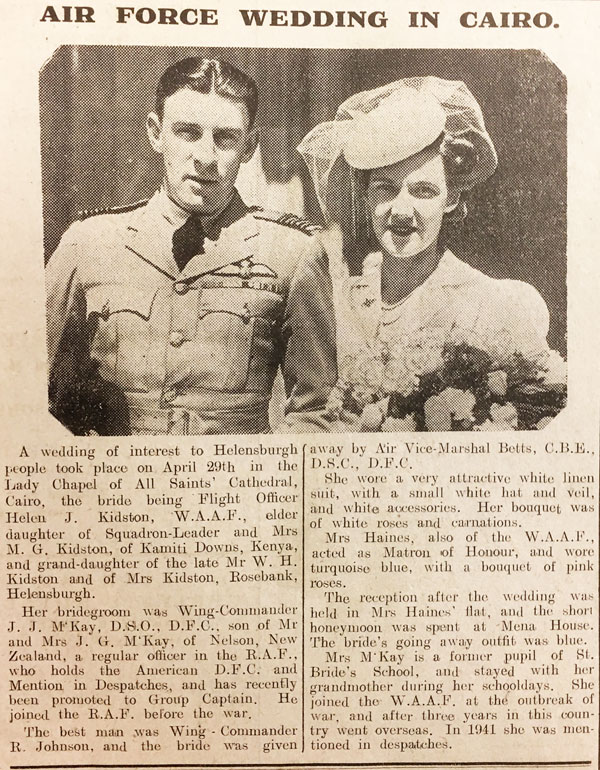 A much happier event provided the only picture in that edition of the paper — the marriage of a daughter of a well-known burgh family in Egypt.

A major effort was being made to raise money for the ‘Salute the Soldier’ savings campaign. A garden fete was held at Geilston Hall in Cardross, organised by Miss Eunice Murray MBE. The Dunbartonshire Cadet Force and local VAD girls assisted.

Lady Colquhoun of Luss formally opened the YWCA Rosemount Hostel for women at 10 West Argyle Street. For the two years the problem of local services accommodation had been a real headache.

The Department of Health for Scotland advised: “Feed right to feel right! Shredded cabbage is delicious in salads. A salad a day keeps the doctor away.”

Advertisements included advice from the Ministry of Food about where to get new ration books, and the slogan: “Even in War Time there is much to be said for shopping at Coopers, famous for tea and coffee since 1871.”