THE Marine Aircraft Experimental Establishment based at RAF Helensburgh at Rhu in World War Two was tasked with investigating the problems of a bomber which was nicknamed by aircrew as ‘the flying coffin’.

Blackburn Bothas were built at Dumbarton from 1939 to Government specifications for a four-seater, twin-engine reconnaissance bomber.

Dumbarton had no airfield, so Blackburn faced the problem of how to transport newly constructed aircraft.

They came up with a solution — a purpose built self-powered barge that could carry Bothas to Abbotsinch Airfield.

Retired Merseyside newspaper editor, Robin Bird, who has written two books about the MAEE, has explored the story of the long forgotten ‘Dumbrough’ barge and the Botha aircraft that only killed those who flew in them.

Both the Botha’s airframe and the under-powered Bristol Perseus engines were blamed for crashes, along with bad handling and poor cockpit visibility.

Bothas sank quickly when ditching at sea, not giving the crew time to escape. Because of these fatal flaws Bothas were eventually withdrawn from RAF service.

MAEE, who had considerable experience in such things and had a working relationship with Blackburn Dumbarton, tried to solve the Botha ditching problem and air frame weaknesses.

They carried out dropping tests on Bothas and studied impact damage. The aim was to give operational crews life-saving seconds to escape from the floating wreckage.

Damaged Botha sections were ferried to Helensburgh on Drumbrough for inspection by experts after being dropped from a relative height into Clyde waters.

This was done using a crane at the Denny shipyard, often with MAEE personnel inside the aircraft fuselage.

These brave souls observed where water flooded, and with rags plugged and marked the source of leaks.

An RAF rescue launch stood by in case of any emergency during these manned dropping sessions.

The overgrown foundations for the Botha crane can still be seen on wasteland opposite the volcanic rock on which Dumbarton Castle stands.

Bothas continued to be ferried by Dumbrough to Abbotsinch throughout the production run.

It is thought that no photographs exist of the barge, but Robin has found a detailed sketch and the specification.

Dumbrough got its name because Blackburn had factories at Dumbarton and Brough in Yorkshire, where Bothas were also built — a total of 442 were ordered.

The barge was built at Denny’s shipyard in 1938 at a cost of £4,135. It was designed to carry a Botha (right) with wings detached.

Its dimensions had to allow the loaded vessel to go under the bridge at Inchinnan, after which the aircraft was unloaded and then reassembled.

The barge’s power was from two diesel engines. The hull was painted black and the masts were varnished wood. The length was 73.6ft, breath 25.7ft, weight 39 tons. The engine maker was Gleniffer Engines, Anniesland, and the diesel power could produce nearly nine knots.

The registered owner was Blackburn Aircraft Dumbarton, but when they started producing the larger four-engined Sunderland flying boats delivery was easier. Sunderlands went along the Gareloch to RAF Helensburgh at Rhu for airworthy certificates and maiden flights.

Ditching trials by MAEE were extensive. It was found that collapse of the Botha bomb doors during ditching resulted in just two per cent of crews surviving. Flight path angles prior to ditching were also found to be an important aspect of survival.

The hull launching tank, brought up from Felixstowe and rebuilt at Helensburgh, was used to make improvements on large scale models. This allowed more types of aircraft to be tested in model form.

The carpenters at Helensburgh were kept busy.  Professor John Allen and MAEE colleagues produced detailed reports on the Botha and model tests on Warwicks, Albermarles, Mustangs, and Baltimores, and later on the Horsa glider used in large numbers on D-Day. 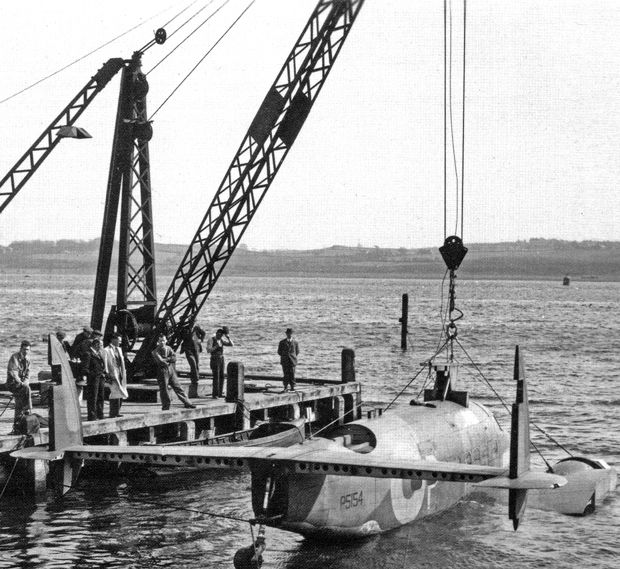 MAEE also used the crane at Dumbarton for dropping tests on the Lockheed Hudson bomber (left).

All tests were carried out with urgency to help prevent loss of life at sea, and at the same time MAEE carried out trials of life saving equipment for aircraft.

Meanwhile Blackburn Bothas continued to crash. The crashes were not publicised, so as not dishearten aircrews, or worry the public.

However, two Botha crashes did hit the headlines as they involved the public. They happened back to back.

The Botha crew died, eight passengers waiting for trains at Blackpool station were killed, and another six people died later of their injuries.

The Defiant crew involved in the collision also died. Poor visibility from the Botha’s cockpit was a suspected reason for this tragedy.

Botha crashes near Abbotsinch started as early as 1940 and included Botha L6377 on May 26 1940 and a couple of weeks later Botha L6390 on June 12. Both are believed to have been newly built aircraft.

All Bothas were withdrawn from service by the RAF in September 1944, and no examples survive. The Dumbrough barge survived the war, and afterwards was used as a car ferry before being scrapped.

n Flying Officer (Engineering) Peter Knight transferred to RAF Helensburgh during July 1941. In his flying notes, immediately prior to joining MAEE, he was testing Botha L6303 with the engine overheating.

Testing flying boats at Helensburgh was not a safer occupation. Saro Lerwick L7248 crashed that October while being tested, killing all aboard.

Peter told Robin that he should have flown with the pilot, Flight Lieutenant John Collinson Alexander, that day. He was the designated engineering officer, but he could not fly at the last minute because of a problem in the instrument office.