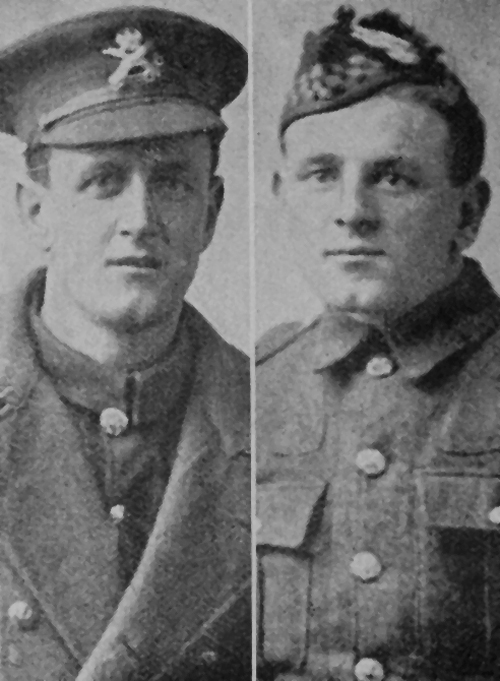 THE TALES of courage and often the supreme sacrifice by Helensburgh and district men in World War One are many and moving . . .

But it is likely that the story of Lance Corporal John McDougall DCM is unique in that he was once declared a deserter — and later was awarded Britain’s second highest award for bravery.

In the summer of 2019 in an article in the Helensburgh Parish Church magazine, former Helensburgh Heritage Trust director Sandy Kerr wrote that he was seeking information about of the names on the church war memorial.

The fact that the Distinguished Conduct Medal is one rung below the Victoria Cross, making John McDougall the most highly decorated soldier on the memorial, inspired another burgh man, Robert Hepburn, to look into his story.

Initially Robert could find no record of a John McDougall being awarded a DCM or being killed during the Great War.

Six months later, after much painstaking research, Robert had found nearly all the answers he was looking for, and now he is hoping that, more than 100 years after his death, John’s name will be added to the Roll of Honour on the Scottish National War Memorial in Edinburgh.

John (pictured on the left with brother William) was born on July 26 1887 at 27 Colquhoun Square, a first child for gardener’s son Dugald McDougall and his domestic servant wife, gardener’s daughter Annie Morton Thomson.

Two of their sons, John and William, were to be killed in action in what became known as the Great War.

William arrived in France with the 1/8th Argylls, part of the 51st Highland Division in May 1915, and lost his life in the Battle of Beaumont-Hamel during the second British attempt to take the village in Picardy during the Battle of the Somme on November 13 1916.

He was reported missing presumed dead, and his body was never found.

He is commemorated on the Sir Edward Lutyens-designed Thiepval Memorial to 72,337 missing British and South African servicemen who died in the Battles of the Somme between 1915 and 1918, with no known grave. It is near the village of that name in Picardy.

After leaving school older brother John was learning his trade working as a gardener for John R.Johnston at Rhu Arden, Upper Sutherland Crescent.

In 1912 he joined the Clyde Royal Garrison Artillery, and in August 1914, aged 26, he was posted to the RGA Battery at Portkil, Kilcreggan.

So far so straightforward, but that was to change dramatically as Robert discovered — as on August 28 1915 John was listed as a deserter from the Battery.

Robert said: “We shall probably never know exactly why John deserted that ‘cushy number’ at Portkil Battery, but there are some possible reasons.

“The local Helensburgh area 1/9th Argyll & Sutherland Highlanders battalion was virtually wiped out at Ypres in May 1915 and the battalion effectively disbanded, so he may have lost many friends. That same month his younger brother William arrived in France.

“He may have been bored with the inactivity of a Clyde-based shore battery, or it is entirely credible that he left so he could make a greater military contribution for King and Country.”

John then joined the Motor Machine Gun Service, at that time part of the Royal Artillery and later to become the new Machine Gun Corps, but not under his own name of McDougall.

He used the surname Thomson – his mother’s maiden name — which thoroughly complicates research into him, especially as his parents still called him John McDougall.

After training at the shooting range at Bisley Camp near Woking in Surrey, late in 1917 he went out with a draft to the Mesopotamia front, in what is now Iraq. Promoted to Lance Corporal, he wrote cheerful letters to his parents who were now living at 53 James Street.

He was killed in action on October 27 1918 in his 31st year while he was serving with the 14th Light Armoured Motor Battery of the Machine Gun Corps at the Battle of Sharqat.

His death three days before the war in Mesopotamia ended was reported in the Helensburgh and Gareloch Times on November 27, giving his name as Lance Corporal John McDougall.

The weekly paper added: “To the bereaved parents and his devoted sisters, many tokens of sympathy have been shown in their sad bereavement.”

An account of John’s death was given in a letter to his mother from Lieutenant Burhson who was in charge of his Battery at the time, and it was published in the Helensburgh and Gareloch Times on March 5 1919.

The letter read: “You will be very proud to know your son was awarded the Distinguished Conduct Medal for his bravery in action on 27th October 1918, before he was killed.

“When the car was hit by the Turkish shell the engine stopped, and your son volunteered and got out under heavy machine gun and rifle fire and attempted to start the engine up.

“It was the act of a very brave man and it was the bitterest bad luck that he should have been killed later. I enclose a piece of medal ribbon, and should you not receive notice about the medal let me know so I can take steps.

“I also enclose a photo of his grave and you may be sure it always is carefully looked after, as our convoys pass it frequently and see that it is kept in good condition.

“I sent under registered cover in a parcel I sent home a silver match box which was not handed to the records office. This will reach you through Miss Harding about the time you receive this.

“If there is any information you require, or if I can be of any use in any way be sure to let me know.”

Robert believes it to be self-evident from the letter that Lt Burhson knew that Thomson was actually McDougall — not just by writing to Mrs McDougall, but also by saying that “should you not receive notice about the medal let me know so that I can take steps” because of course the medal was awarded in the name of Thomson.

The formal citation for the medal, awarded to Lance Corporal J.M.Thomson for distinguished conduct in the field, appeared in the Edinburgh Gazette of April 22 1919, and the London Gazette of February 25 1920.

The London citation read: “For conspicuous gallantry and devotion to duty near Huwaish on 27th October 1918. When his armoured car received a direct hit and was stopped, he jumped out, and under very heavy fire at close range tried to start the engine again.”

He also won the Victory Medal and the British War Medal.

As a result of Robert’s research the Commonwealth Graves Commission last month changed their records to reflect that the casualty they had known for over 100 years as Lance Corporal J.M.Thomson or Thompson was in fact Lance Corporal John McDougall DCM.

He is commemorated on the Commonwealth Graves Commission Basra Memorial Roll of Honour. Both he and William are named on the Helensburgh Cenotaph in Hermitage Park.