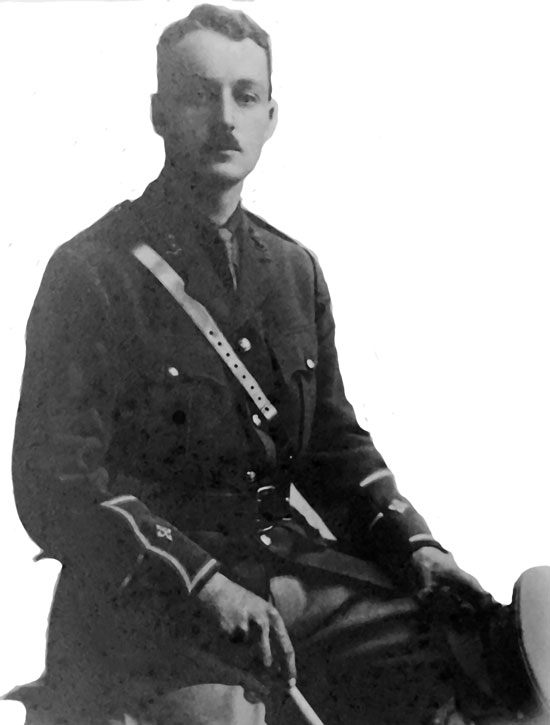 A CARDROSS man won medals for gallantry in World War One and went on to become a highly respected figure in Scottish education.

Major Robert Kinloch, MC, Croix de Guerre, MA, FEIS, lived in the village for many years, and was for a decade head teacher of the village primary school.

Born Robert Parlane Kinloch at Tullichewan Home Farm, Alexandria, on April 26 1887, he was the son of farmer James Kinloch and his wife Maggie, and was known as Bertie.

Educated at the High School of Glasgow, he graduated MA from Glasgow University in 1909 and then became a teacher. He was appointed head at Cardross in 1914.

Later that year, when World War One broke out, he enlisted in the Royal Garrison Artillery in 1914 and was commissioned as a Second Lieutenant.

He served in France and Flanders in the trenches, and by 1918 was a Lieutenant, Acting Captain, in the RGA’s 114th Siege Battery.

It was in September that year that his bravery earned him the Military Cross for acts of exemplary gallantry during active operations against the enemy.

He was undertaking the very dangerous role of Forward Observation Officer, whose job it was to report back to his battery from an exposed forward position on the range and trajectory of their guns.

The citation for the M.C. appeared in the London Gazette of January 31 1919.

It read: “On 1st and 2nd September 1918, at Mount St Quentin, as forward observation officer for his battery, he displayed conspicuous gallantry under heavy fire and rendered valuable service, personally patrolling and repairing the telephone lines, which were continually cut by the enemy shelling.

“He was indefatigable in engaging the enemy, and though he was exposed to severe high explosive and gas shelling and sniping fire, he displayed admirable devotion to duty throughout the whole operations.”

He was already the holder of the Belgian Croix de Guerre which he was awarded by the King of the Belgians on April 15 1918 for bravery at Ypres a year earlier.

Later he received the Serbian Order of St Sava, awarded for service to the Serbian King, State and Nation, by civilians or the military.

He qualified for the Victory Medal, also called the Inter Allied Victory Medal, and the British War Medal, issued for services between 5th August 1914 and 11th November 1918.

He was named on the Glasgow Evening Times Roll of Honour for May to August 1918 and the Roll of Honour at Cardross Parish Church when it was unveiled on September 26 1920.

By March 1919, with the rank of Major, he was back home, and the Helensburgh and Gareloch Times reported that he would resume his scholastic duties at Cardross School, which was at that time beside the main road through the village, at the end of the month.

On July 27 the following year and now aged 33, he married Catherine Taylor Jack Miller, the 23 year-old daughter of the Jamestown Parish Church minister, the Rev Daniel Jack Miller, and wife Mary, at Jamestown. Later the couple had two sons.

He remained in post at Cardross until 1929, the year electricity was installed in the school. While there he organised a choir in connection with the evening continuation classes, and he staged many concerts.

His next post was as headmaster at Hartfield School in Dumbarton, and later he became headmaster of Dalmuir Junior Secondary School.

He was known throughout the country as an active and very able member of the Educational Institute of Scotland, and he received its Fellowship in recognition of his valuable services.

He and his family lived at Springvale, Ferry Road, Cardross, (right) an elegant mansion which he extended shortly before the outbreak of World War Two.

A committed Christian, he gave devoted service to Cardross Church, as a member of the Presbytery, Session Clerk, and representative for many years to the General Assembly.

He was also secretary of the Geilston Hall Committee for some years.

His sudden death came on October 29 1951 when he suffered a heart attack at Springvale at the age of 64, six months before he was due to retire.

The Helensburgh and Gareloch Times reported: “His loss will be greatly felt in many circles, and deep sympathy is extended to his widow and two sons in their great and sudden loss.”

Some two weeks later the village minister, the Rev A.A.Orrock, followed his sermon with a fulsome tribute.

He spoke of the shock to the whole village at the news of Mr Kinloch’s sudden death. Only the week before he had been dispensing the Communion elements.

Mr Orrock, although he had known Mr Kinloch only since February, felt as if he had known him a much longer time, and to his mind there were three outstanding things about him.

These were his integrity of character, his sense of duty to his neighbour, and his neighbour was anyone who needed him.

Mr Orrock said: “He was forthright and outspoken when he had made his decisions, but never bore malice or resentment to those who opposed him.

“He felt respect and admiration for those who held their point of view with a zeal and tenacity that matched his own. Though he was gone, his influence must remain.”

The minister added that he could think of no epitaph that would sum his life more fittingly than the three words, “Trusted, Honoured, Loved.”

He was always sympathetic to the needs of others, he said, recalling incidents which showed how his heart always went out to children.

But he did not advertise his generous nature, and when the end came it was not himself he was concerned about, but what he called the trouble he was giving to those fighting to save his life.

The last thing Mr Orrock mentioned was his faith and his long service to the Church of Scotland. 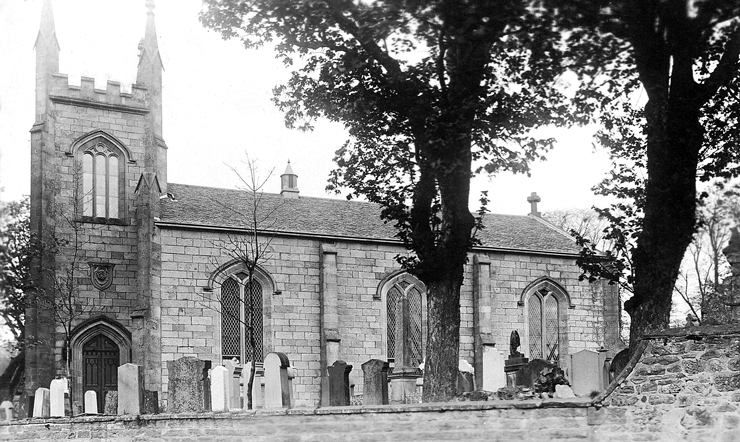 The destruction of the old church beside the main road (left) in the ‘Cardross Blitz’ on May 5 1941 — an event the family witnessed — was a grievous blow to him, but he still loyally supported the services and his presence lent strength to the man in the pulpit.

“Today he should have been at the door of the church,” the minister added, “but instead he stands with a greater host in another land. But his memory remains, and his influence will abide.

“Here then is cause for thanksgiving and not for sorrow, but in our thanksgiving for his sake our hearts go out in heartfelt sympathy for his sorrowing wife and his devoted sons.”

His older son, Glasgow solicitor James Parlane Kinloch, was born in Cardross on February 1 1928 and died in Glasgow Western Infirmary on September 24 1984 at the age of 56.

His younger son, Ronald Roxburgh Kinloch, was born in the village on October 10 1932 and lived there all his life until his death on July 23 2007.

Like his father he was a prominent local figure, running estate and travel agencies in Helensburgh and serving for many years as a member of Helensburgh District Council and then Argyll and Bute Council.

A founder member and later president of Helensburgh Rotary Club, he was a trustee of the Cardross Trust, a member of the Cardross School board, chairman of the board of governors of Lomond School in Helensburgh, and an elder of Cardross Church from 1970.