EVERY picture tells a story. A faded family photograph taken at 128 West Princes Street, Helensburgh, during World War Two was a happy moment during an unfolding story of action, death and drama.

Retired Merseyside newspaper editor Robin Bird, who sourced this material during his ongoing search for the history of the Marine Aircraft Experimental Establishment, said that it is also a story of a secret army force within a secret air force at Helensburgh. 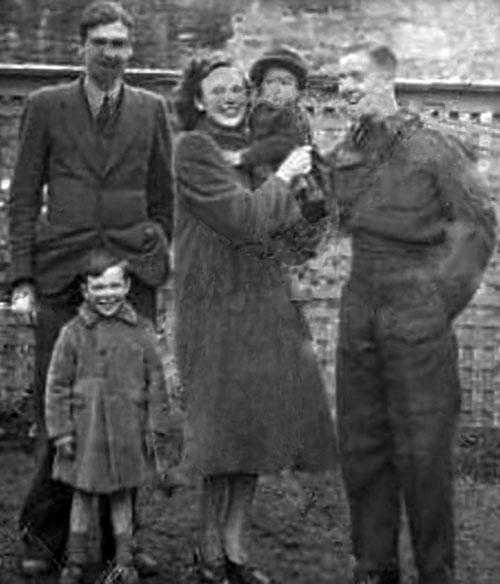 Around the same time the picture was taken, a top secret memo arrived on the desk of Group Captain F.A.Norton, the commanding officer. Its contents have previously not been seen outside the MAEE headquarters.

The first photograph shows Vincent Drake and his young family with an off-duty commando. Vincent was the civilian in charge of air to sea rescue trials at RAF Helensburgh.

He survived two flying boat crashes on the Gareloch — the second as the only survivor left him physically and mentally scarred.

His marriage broke up as a result of that crash.

The unknown commando on the right of the picture was with No.5 or No.6 commando units, a merged special fighting force based at Helensburgh.

They lived and trained in the town and district under the umbrella of secrecy that covered all the operations of RAF Helensburgh and the MAEE before undertaking dangerous missions into occupied Europe.

This special operations battalion of two companies, each with 500 men, was under the com-mand of Lieutenant Colonel Timothy Fetherstonaugh.

A larger than life soldier who previously had held a substantial rank in a royal regiment, the Colonel was targetted at MAEE to train his men for a raid on the coast of the German-occupied Norwegian coast.

Many of his men adopted Tam O’Shanter-style berets while they were serving in Helensburgh and elsewhere in Scotland.

No.5 later took part in raids on St Nazaire and the French colonies. No.6 took part in Operation Torch, the Allied landings in Algeria, and then D-Day.

US Marines started arriving in Helensburgh following the USA’s entry into the war in December 1941.

They too were billeted in the Gareloch area and, wearing USA flag badges on their uniforms, trained as commandos with the British before being sent abroad. 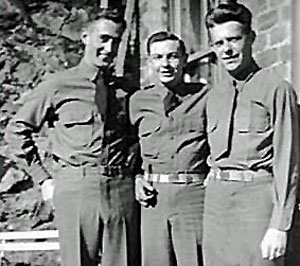 The British officer in charge of training them at Helensburgh and Lachailant told US Top Brass: “Your Marines have undergone arduous commando training with an unconquerable spirit.”

Most of the commandos were gone by the end of 1942 to take part in battles throughout Europe and the Pacific.

But in the picture (left) U.S. Marine G.W.McGurdy, from Colorado, is seen with two fellow marines — known as Pat and Buss — outside 90 West Princes Street, Helensburgh.

He recalled: “Our landlady was Mrs Dongarty, and she treated us like sons. She had an attractive daughter called Peggy, but as US Marines we were forbidden to fraternise with local girls in Helensburgh.”