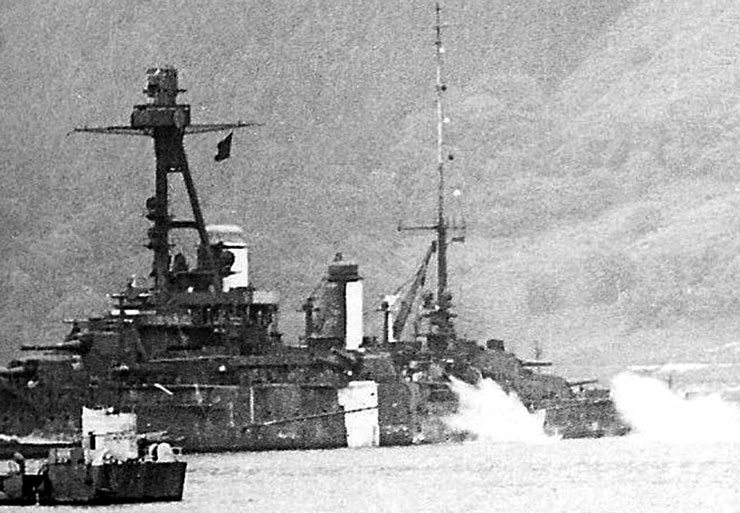 A FIRST World War battleship which played an important role in the secret operations of RAF Helensburgh during World War Two was a key ship used in the D-Day landings 75 years ago during June 1944.

As a fully commissioned warship Courbet was brought up to Loch Striven to serve as a target ship for the Marine Aircraft Experimental Establishment based at RAF Helensburgh.

It stood in for the German battleship Tirpitz during Highball bouncing bomb trials because it was of a similar size. ‘Dambuster’ pilots of 617 Squadron and MAEE pilots then bounced inert Highball bombs at Courbet in preparation for an attack on Tirpitz in Norway.

Rhu-based boffins were aboard Courbet to take recordings and score the hits by Mosquito and Wellington (left) as they battered the warship after bouncing Highballs over protective nets.

The recent 75th anniversary of D-Day is an opportunity to trace what happened to Courbet after the vessel left its mooring in the Gareloch.

Whitehall and the Free French authorities had plans for Courbet, which was turned into a ‘Gooseberry’, a block ship for Sword beach landings during the D-Day landings. Minus its engines and boilers it was fitted with some extra AA anti-aircraft guns.

Courbet was towed by the tugs Growler and Samsonia to Sword Beach as an obstruction to waves during troops landings. It also supplied covering fire manned by Free French sailors and British Army gunners.

Flying the Free French flag and a holed Cross of Lorraine she attracted the attention of the Luftwaffe besides the German batteries.

The German bombers thought that they had sunk the old battleship but it had been partly scuttled to form a permanent defence structure.

Courbet continued to give return fire throughout the landings, still proudly flying its battle-scarred French flag.

The enemy midget submarine Marder attacked and thought it had sunk Courbet during the nights of August 15-17, but it remained off Sword beach throughout the landings.

Still in the Highball target markings from Loch Striven, the vessel was eventually scrapped early in the 1950s.