WHEN Hogmanay 1942 was celebrated at RAF Helensburgh, pilots of the Marine Aircraft Experimental Establishment were about to start the New Year testing Johnnie Walker . . .

However it was not the whisky, but a potential lethal cocktail made up of the explosives Torpex, RDX and TNT packed into a 400-500 lb self-roaming bomb powered by an attached bottle of compressed hydrogen.

The MAEE aircrew and bomb handlers were told to treat Johnnie Walker with great respect, as the top secret weapon was sensitive and untested.

As a result, MAEE researcher and author Robin Bird discovered, the pilots were a little nervous carrying Johnnie Walker as a passenger, as the hydrogen bottle caused fears of an accidental explosion aboard the aircraft.

The bomb, technically a mine, had to be dropped by parachute to avoid jolting during its departure from the aircraft.

The Short Sunderland DV 967 G — Guard at all times — flying boat (pictured above) was used for most of the trials, but it was an unlikely choice as Johnnie Walker was to be used operationally by Lancaster bombers.

This was because a Lancaster was not available. After all Barnes Wallis, inventor of the Bouncing Bomb and the Wellington bomber, had trouble obtaining a Wellington for his bouncing bomb trials.

Bomber Command needed every Lancaster available for raids over Occupied Europe. One such bombing raid was on the elusive German battleship Tirpitiz hiding in a secluded, well protected Norwegian fjord.

Lancaster bombers of 617 — the famous ‘Dam Busters’ squadron — dropped Barnes Wallis Tallboy bombs, one of which damaged Tirpitz, reducing its role to a static defence vessel.

Tirpitz was eventually sunk during a third Lancaster attack on November 12 1944.

The first Tallboy bombing raid in September was Operation Paravane. What is not generally known was that a second type of bomb was used in this raid.

This was the Johnnie Walker, developed and tested at RAF Helensburgh, where Highball bomb trials were also conducted prior to an aborted raid on Tirpitz.

The testing of JWs at Helensburgh was conducted in secret, and Robin has discovered a never before published first-hand account by MAEE’s chief armament officer Dennis Tanner, who is now deceased.

Dennis said that Johnnie Walker was born out of Winston Churchill’s magic wartime box of revolutionary weapons. Scientists quietly discussed the project in a pub while drinking Johnnie Walker whisky, and that is how it got its name.

He said: “This bomb was produced by boffins in a unit, I believe, called MAD. I don’t remember what those initials stood for but they were not inappropriate. The head of MAD was a Brigadier but I cannot now remember his name.”

Not surprisingly Tanner forgot the name, probably Millis Jefferis, when he recalled the JW trials in a letter in 1991 to a former MAEE colleague.

Dennis was then aged 85 and living in the Canary Islands. Fortunately he had written down his experiences at Helensburgh shortly after the war. His letter is now browned with age.

It states: “The Brigadier had red hair. This earned him the nickname Rusty. A splendid man, full of enthusiasm over JW, he came to Helensburgh regularly from the Aeroplane and Armament Establishment to see how his baby was developing.”

The Johnnie Walker (left) caused the MAEE many tribulations during trials, said Dennis.

“These bombs were designed to be dropped by parachute into enemy harbours,” he wrote. “They would bob up and down and travel around until they hit something, or the gas ran out.

“The bomb was a mass of pipes and valves and was packed with explosive. It was delicate to handle. As an armed JW was too expensive to use for all of our trials, so ‘inert’ practice bombs were also used.

“In one practice run I released a JW but could not see it going down. I tried another but still no bomb fell. I went back to the bomb bay and all the bombs were still racked out under the wings.

“During another trial when a JW was dropped off Rhu we kept a close eye on its movements. Top Brass watched wanting to see how JW performed.

“I was in a dinghy with a hefty lad to row. My job was to scatter aluminium sea markers at places where JW surfaced.

“A Walrus aircraft circled above photographing. However this caused aluminium flakes to blow over the dinghy and stick to us. I looked like a Christmas fairy, much to everyone’s amusement, when I returned to Rhu.”

MAEE delivered JWs to Bomber Command for the raid on Tirpitz, stressing the need to drop the mines in such a way that the parachutes kept the bomb stable and on course.

Notes on how to store, arm and load the mine were also issued prior to the raid on September 15 1944. The Lancasters were deployed near Archangel in Russia. No 617 was to drop Tallboys.

No.9 Squadron was to drop JWs, but the crews did not like their lot after being told of the delicate nature of the mine.

They were instructed to jettison their JWs if they came under fighter or ‘ak ak’ attack.

This made them wonder, too, what might happen in an emergency landing, or mine jolting circumstance. The mine’s parachute and arming pin were both deployed by a fixed line as it left the aircraft.

It was extremely difficult to drop it accurately. During the raid Tirpitz put up a smoke screen obscuring the battleship and making it difficult to know where bombs landed. 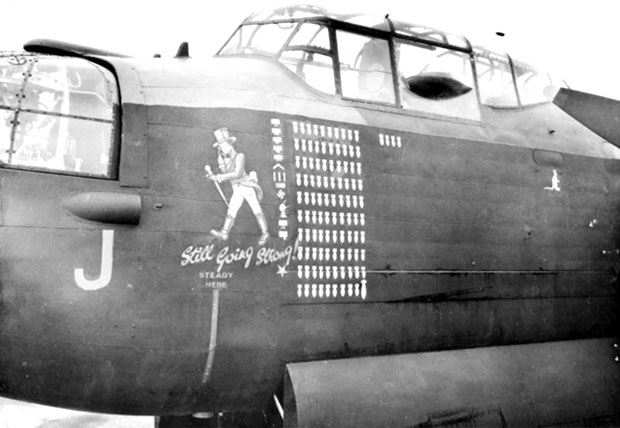 The Lancasters carrying JWs (one is pictured right) were a little late over the target when the smoke screen was dense. The Johnny Walkers fell into the centre of the smoke screen, so no visible explosions were observed.

One Tallboy struck near the bow of Tirpitz while other near misses damaged the ship’s engines. From then on the Germans considered Tirpitz beyond seaworthy repair.

She was moved to Tromso to become a floating gun battery, which put her 200 miles closer to Britain.

Bomber Command crews subsequently launched two more attacks. No hits were recorded on the October 29 1944, but on November 12 1944, Tirpitz was hit by two or three Tallboys. There was a violent explosion, and she capsized.

It is not recorded if JW mines were used on these two raids. On the September 15 raid the JWs dropped did not hit Tirpitz and floated around before sinking.

In recent times an unexploded JW was discovered in hills above Kafjord. Still filled with Torpex, it was relatively intact. It is now in a Norwegian museum, the only surviving example of a Johnnie Walker.

This makes it rarer than the Highballs recovered at Loch Striven, where MAEE conducted Highball trials.

As for the flying boat DV 967, after JW and parachute trials at Helensburgh, and minus the G for guard, it saw action.

Pilot Officer L.B.Lee and his crew inflicted damage upon U-564, but DV 967 was shot down, killing all aboard.

U-564 was taken in tow by another U-Boat before being spotted by Sergeant A.Benson, pilot of a Whitley bomber who was forced to ditch during the attack.

The crew survived as prisoners of war. U-564 was fatally damaged in the Whitley attack and later sank, some of its crew surviving.