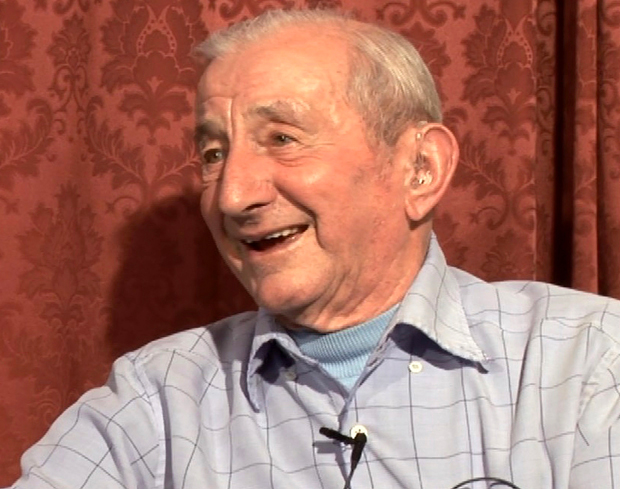 A GARELOCHHEAD villager was torpedoed twice in World War Two — and lived to tell both tales.

That was exactly what James Reeves did when Helensburgh Heritage Trust prepared a DVD in which local people recalled interesting memories of the war.

Known to his friends as Jimmy and now aged 96, he survived the sinking of two ships during the war and was one of the youngest members of crew on board during the war years.

The tanker was torpedoed and sunk by U-455, and seven crew members were lost while 46 survived the sinking.

He was also aboard the rescue ship Pinto when it was sunk on September 8 1944 at 6.37am by U-482. It had been sent to pick up survivors after another ship was torpedoed. 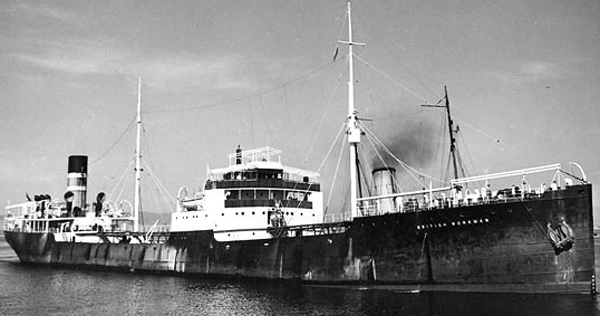 The British Workman (left), captained by Arthur W.Wilson, on route from Greenock to Galveston, Texas, was straggling behind convoy ON-89 because of engine troubles.

She was torpedoed and sunk by U-455, captained by Hans-Heinrich Giessler, south-southeast of Cape Race, which is on a Newfoundland peninsula.

The master, 38 crew members and seven gunners were picked up by the Canadian navy destroyer HMCS Assiniboine and the corvette HMCS Alberni, and landed at St John’s, the Newfoundland capital.

Jimmy recalls boarding the lifeboat the tanker was torpedoed.

He said: “We could hear banging as they put others in another lifeboat. They cut us loose and we got away.

“We were left in the water for five or six hours before we were picked up.”

Some four months later he was torpedoed when on board the 1,346 ton rescue ship Pinto, and he was puzzled why the ship had been attacked.

He said: “We were sent to pick up survivors. I was in one of two lifeboats and we found and picked up two survivors.

“We climbed back aboard the Pinto, soaked and freezing, so I took off my life-jacket. I was headed below deck to dry off when I heard that there was a torpedo coming towards us.

“The flag on the ship was flying to state that we were a rescue ship, but as soon as it came down, we were a ship of war.”

Jimmy recalled how the member of crew he was talking to when the torpedo hit was killed.

He said: “I dived in the water and tried to swim to the boats, but I was dragged down. When I resurfaced I made my way to a boat.

“The seas were heavy and I struggled. By the time I got to the boat there were two of us left out of five or six.

“A destroyer picked us up and took us to shore. The torpedo had hit the ship in the morning and I was picked up as it was getting dark.”

Able Seaman James Reeves was in one of the two lifeboats lowered by Pinto (below right) to rescue survivors from the 15,702 ton steam tanker Empire Heritage, sunk by U-482 near Tory Island off the County Donegal coast.

They returned aboard after picking up three or four survivors and James later remembered that he was soaked to the skin and decided to go down and get changed when the Bosun stopped him.

Believing that flying the rescue flag would prevent an attack he wanted to get below, but he was stopped again by the Bosun who shouted that a torpedo was coming straight at them.

James scrambled as far away as possible but his friend could not seem to move and was killed instantly when the torpedo struck below the foremast.

He attempted to release one of the rafts but it was jammed, so he just dived into the water.

However he was caught in the suction of the sinking ship and pulled down.

He held his breath as long as he could but then must have blacked out because he found himself on the surface, possibly being blown to the surface when the boilers exploded.

Spotting the ship’s jolly boat lying about 50 yards from him with six or seven men, he swam to the boat and held on to it.

It was very heavy weather and a large wave swamped the boat, washing them all away.

Those with life jackets had trouble reaching the boat again as they could not swim in the heavy sea, and only three men were still clinging to the boat after a couple of hours.

In the meantime, most survivors had been picked up by an armed trawler, but the three men were not seen and were left behind.

Some hours later the remaining survivors were spotted by an aircraft and the Royal Navy frigate HMS Inman from an outbound convoy came to pick them up.

On September 13 Jimmy was landed at Londonderry and taken to a hospital because he had swallowed oil.

After two or three days he was taken to a hospital in Glasgow where he discovered that he had been reported missing and was believed lost.

Jimmy was born at Woodlea Place, near to the site of the village pier, and he has lived most of his life at Garelochhead, although the family was also at Tarbet for a spell.

After he left the Merchant Navy, his working life was spent as a joiner. In the late 1940s, he was employed with David Gall, Garelochhead, when, among other contracts, a lot of time was spent working at the “Rhu Scheme”.

Later, he worked with the Helensburgh firm of MacDonald the joiners.

He and his wife Rita, who died on November 18 2012, had a daughter Maggie, who is married to Nicol Slee, who retired recently from his fabrication and welding business in the village, although it is still family-owned.

The couple also had a son, Stewart, who predeceased them.

Jimmy’s story was told on the DVD produced in 2014 by the Heritage Trust and West Highland Photography, entitled “WWII All Our Stories”, in which he and other wartime survivors from Helensburgh, Cardross, Rosneath, Garelochhead and Kilcreggan were interviewed.

The DVD, made possible by funding from the Heritage Lottery Fund, is still available to purchase from Robert Bell at West Highland Photography, 21 East King Street.