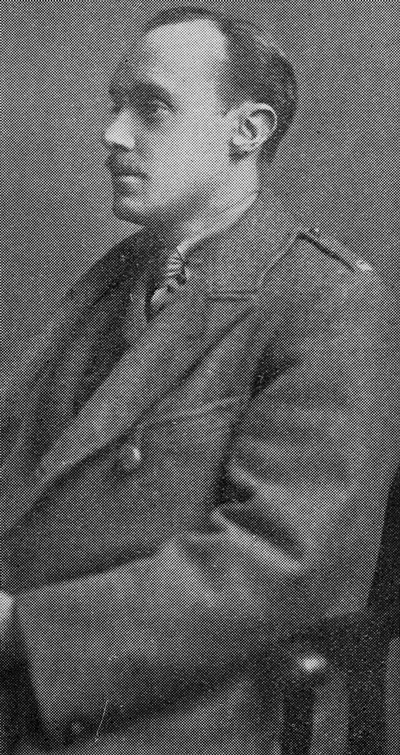 A WORLD WAR ONE hero who died in Helensburgh’s Victoria Infirmary on September 28 1972 at the age of 93 was immensely popular with the local regiment, the 9th Argylls, for his courage.

Major George James Christie DSO, who spent his final years at 13 Douglas Drive East, won the medal for his gallantry at the Second Battle of Ypres in May 1915.

The 9th (Dumbartonshire) Battalion, Argyll and Sutherland Highlanders, was a Territorial Force battalion which, at the beginning of 1914, was based at Dumbarton.

During the three weeks between April 30 and May 21 1915 the Battalion lost two commanding officers, most of its company officers, and 75% of its NCOs and other ranks.

The book “Deeds That Thrill The Empire”, a classic work which describes many deeds of valour in the Great War which resulted in the award of gallantry medals devoted a chapter to Major Christie’s exploits.

What follows is an edited extract . . .

During the night of May 9-10, a draft of thirty men, all burning to take their share in the great battle which had been in progress for nearly three weeks, joined their battalion, which was occupying dugouts n the Zouave Wood near Hooge.

At dawn the new arrivals were allocated; before midday they were fighting for their lives; and when evening came, only two of them were fit for service. That day was a terrible ordeal for the gallant Territorials.

Early in the morning the German artillery began a heavy bombardment of the British trenches on either side of the Ypres-Menin Road, which in places were soon almost demolished, and the bombardment was followed up by an attack under cover of gas.

Between 8 a.m. and 9 a.m. the 9th Argylls were ordered to reinforce the 2nd Camerons with two companies, and "A" Company and "D" Company were chosen, under the command of Major Christie.

Through terrific shellfire, he led his men to a position astride the Menin Road, 200 yards west of Hooge, where the Cameron HQ was.

They dug themselves in, while the major went forward for further orders. At 9.30 he was ordered to lead one company forward to reinforce a trench south of the Menin Road, and between it and the Sanctuary Wood, which was reported to be breaking.

"A" Company, stationed on the south side of the road, was chosen, and the Helensburgh men advanced in short rushes, with cries of "Good old 9th Argylls!"

The advance lay over a bare slope right to the ridge opposite Chateau Hooge, without a ditch, or hedge, to afford cover from view, and was accomplished under murderous fire.

But though comrades were falling to right and left of him, not one of those brave local men wavered, but only became the keener to come to close grips with the enemy.

They were only just in time, for the gas, on top of the shelling, had been more than flesh and blood could endure. The trench, which they had come to save, had broken, and the men were falling back.

When they saw the Argylls, however, they raised a cheer, and the Territorials dashed into the trench, bayoneted or chased out those Germans who had already gained a footing, and, setting up their machine guns, began to mow down the advancing enemy.

The attackers, astonished by this unexpected resistance, fell back in confusion, and the Argylls and Camerons, did what they could to repair the damage done to the trench.

Soon they saw, to their surprise, a strong force of men in Cameron kilts, advancing through the Bellewarde Wood, north of the Menin Road, toward the trenches occupied by the 91st.

Uncertain as to whether they were British or Germans, they refrained from firing, until volley upon volley from the trenches of the 91st told them they were the enemy in disguise.

Meanwhile "B" and "C" Companies had advanced from Zouave Wood to the trenches, which Major Christie's men had dug near the Menin Road.

On the way, their gallant and much loved Commander, Lieutenant-Colonel Clark, and another officer were killed by shells.

Major Christie, who had hurried back to report the new attack, dispatched "D" Company to reinforce the 91st, but, despite the assistance of the Territorials, they were driven from their trenches by the attacks of the kilted Germans.

The 9th Argylls and 2nd Camerons, though now exposed to fire from north of the Menin Road, gallantly held their trenches against every attack, until night fell.

Piles of corpses bore testimony to the deadly work of their machine guns and rifles. They had themselves lost heavily, however.

At 2 am relief arrived, and Major Christie, whom the death of Colonel Clark had left in command of the 9th Argylls, led his men back to their dugouts in Zouave Wood.

By then the battalion had had twelve officers and some 300 men killed and wounded.

These losses were considerably increased during the next two days, when, their position having been located by a captive kite balloon sent up by the enemy, the wood was raked by shelling.

Major Christie's own dugout was twice blown in, but he escaped without injury.

When the shelling creased, hardly a tree of that wood remained standing — all was a jumble of broken timber and undergrowth, beneath which lay dead men, broken rifles and equipment, and torn sandbags.

On May 16 the 9th Argylls were sent to the rest camp at Poperinghe. But they were not permitted to enjoy even so much as a day's rest, as, scarcely had they arrived, when orders came to join the 10th Brigade at La Brique.

Just after dawn on May 24, while they were occupying the support trenches north-east of Saint-Jean, the enemy started bombarding the front with asphyxiating shells

Immediately afterwards gas was released from the cylinders against the whole three miles of front from Shelltrap Farm to the Bellewaarde Lake. After the gas came a violent bombardment from north, north-east and east.

Seeing that the troops in the first line trenches were beginning to give way, Major Christie decided to repeat the dash to the rescue, and having adjusted their respirators, the Territorials doubled across the shell swept ground which lay between them and the fire trenches.

The sight which met their eyes was terrible, for maimed and gassed men were lying everywhere. But they lost no time getting to work, and, lining the broken parapet, opened withering fire on the advancing Germans.

The enemy fell back, but soon it became apparent that their artillery was concentrating on that particular trench, and, though the German infantry fell in heaps, they continued to advance in ever increasing numbers.

Major Christie saw that, if the trench was to be held, more men must be found to replace those being lost every minute.

As all communication with the rear had been cut, he left one of his officers in charge, and ran back to the support trench, in search of stragglers. He found a few from the Dublin Fusiliers and his own battalion and rushed them forward.

But still there were not sufficient rifles to line the parapet, so out into the fire swept open ground went the major again, searching for men with rifles.

In a small isolated trench he found another group, gassed and half dazed but with rifles.

He was leading them forward when he was hit in the leg by a piece of shell and fell to the ground. But the men he was leading went on and reached the trench.

Major Christie did what he could for himself with a tourniquet although part of his leg had been shot away, until Drummer Bell of the Argylls came out of the trench to his assistance and after giving first aid, went away and returned with two men of their battalion carrying a stretcher.

Lifting up the wounded officer, they set out for the nearest dressing station, but so heavy was the fire through which they had to pass, that they were obliged several times to take refuge in a ditch or under a hedge.

Major Christie begged the men to leave him and look after themselves, but they indignantly refused to do, and, though all three were wounded, they managed to stagger on with their load until they reached the dressing station.

Drummer Bell, who repeatedly placed his own body between his wounded officer and the enemy's fire, was awarded the Distinguished Conduct Medal and the French Croix de Guerre, while Major Christie received the DSO.

As he lay injured he dictated a message: “Ninth Argylls, officers and comrades, words fail to express my admiration of the gallant way in which you rushed forward today, and I want you to continue to stick to it like heroes for your King and country, and for the honour of the county. I hope to be able to come back to again lead you on to victory.”

On July 30 1915 he was awarded the DSO, and on November 30 he was one of nine 9th Argylls mentioned in despatches for gallant ad distinguished conduct.

Major Christie was the youngest son of John Hyde Christie, chairman of the United Turkey Red Company Ltd in the Vale of Leven, and his wife Jessie, nee Fulton.

After leaving school he worked in the business, rising to the position of managing director of the Cordale Works. He served for a number of years with the Alexandria and Renton Company of Volunteers, retiring with the rank of honorary major.

A good shot who won several prizes at the Dumbartonshire Rifle Association meetings at Jamestown, he volunteered for service at the outbreak of the war.

On convalescent leave he returned to Renton to visit the Works and meet relatives of many of those with whom he had served, so he was a popular figure in Renton, which is why on September 3 1922 he was invited to conduct the unveiling ceremony of the Renton War Memorial.

In 1929 at age of 50, he married 38 year-old Jane Fulton Reid from Glasgow at Belhaven United Free Church in the city. He lived at Levenfield, Alexandria, until moving to Helensburgh.