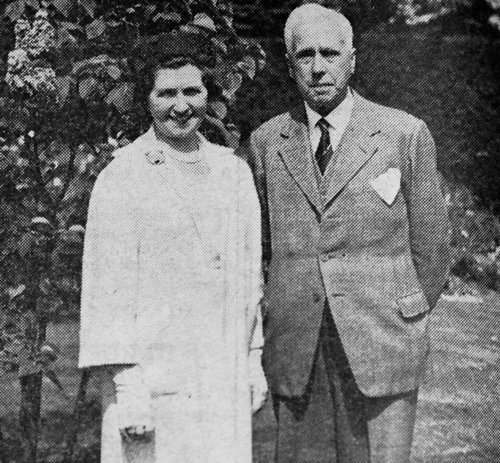 THE MAN who organised the reunions of Helensburgh and district service personnel who fought in the First and Second World Wars was a highly respected town resident.

Lieutenant Colonel Archibald Laird MacConnell, DSO, TD, served the community over many years and in 1950 gifted his then home, Clyde View in East Montrose Street, to the Church of Scotland for use as an eventide home.

An obituary in the Helensburgh and Gareloch Times stated: “The whole community felt a genuine sense of loss when Colonel MacConnell died last Thursday.

“No man in this century contributed more in personal endeavour for the welfare of the elderly in the town than he did.”

He was born at 1 India Street in Glasgow on April 28 1881, the son of shipping agent and shipowner William MacConnell and his wife, Sarah Maria Johnstone, who married the previous June in Hampstead, London.

Educated at Helensburgh’s Larchfield School and Glasgow Academy, he served with distinction in both world wars.

He was long identified with and keenly interested in the training of the Helensburgh Company, initially as a volunteer and later when the county formation became a battalion of the Argyll and Sutherland Highlanders.

As a subaltern at the famous Largo Ward Camp when the troops were reviewed by Lord Haldane, he efficiently performed the duties of quartermaster.

At mobilisation he commanded ‘A’ Company of the 9th Argylls, and under him this company reached a remarkable state of efficiency during six months training at Bedford.

He went to France with his unit, and his company was the first in the battalion to take its places beside the regulars in the trenches at St Eloi, south of Ypres in the Flemish province of West-Vlaanderen in Belgium.

When the 9th Argylls took over a part of the Ypres salient from the French, the then Captain MacConnell gave splendid service, and his company was responsible for much reconstructive work required in the trenches.

On Monday May 10 1915, during the second battle of Ypres he was wounded in the leg while leading his men into action against very hostile artillery fire on each side of the Menin Road. He was invalided home, but rejoined his unit on October 16 as second in command.

On one occasion over the winter, a shell penetrated his iron dugout and blew it to pieces, but fortunately he was not there at the time.

In March 1916 he was posted for duty at the office of the Adjutant General at the base, and occupied an important and respon-sible position on the staff.

Mentioned three times in Sir Douglas Haig’s despatches, he was promoted to Major and awarded the Distinguished Service Order in the January 1918 New Year’s Honours List.

The local paper reported: “This new recognition of his strenuous and conscientious work is a source of great satisfaction to all his friends and to those members of his old company who still remain.”

In peacetime he worked as a director of a shipping line, but he returned to serve in the Home Guard from 1940-45 in the rank of Lieutenant Colonel.

His obituary stated: “His kindly interest in his fellow men was exemplified in his close and continuing association with the men of his old company, which he commanded in France and Flanders in the First World War.

“His personal interest in each one of them and the charm of his personality ensured a large attendance at each annual reunion for 43 years and at garden parties at Towerville and formed an enduring bond that lasted a lifetime.”

In 1950 he was appointed the first chairman of Helensburgh Old People’s Welfare Committee, a post he fulfilled with unflagging energy and enthusiasm for twelve years, attending all the monthly concerts and contributing in many ways to their well-being and happiness.

Only failing health prevented him from carrying on this work, which brought him much personal satisfaction, and he resigned with great regret the year before his death.

He gave further service to the elderly when the social committee of the Church of Scotland decided in 1950 to open an eventide home in the burgh. He offered Clyde View and £5,000, an offer readily accepted.

The committee also acquired the neighbouring property of Ronbank, combined the two houses, and opened Clyde View Eventide Home in 1953. However he continued to take a practical and helpful interest in the home and its residents.

He was a faithful member and officebearer of Park Church, where his funeral was held. It was conducted by the minister, the Rev Dr George R.Logan.

A regimental piper from Stirling Castle played the lament at the graveside in Helensburgh Cemetery, and six of his old colleagues from the First World War acted as pall bearers.

He was survived by his widow, Inger Theodora, and his brother and sister. The couple are pictured above in the Towerville garden.