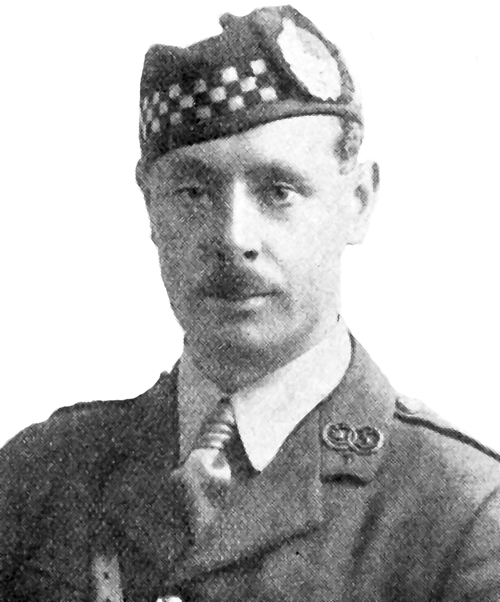 A HIGHLY respected World War One officer from Helensburgh who was a nephew of Lord Strathclyde died in strange circumstances in Italy early in 1918.

Captain Ian Ure MC, of the Argyll and Sutherland Highlanders died of accidental injuries when a bomb exploded on February 2 1918 at the age of 32.

Born John – but always known as Ian — in Helensburgh on May 22 1885, he was the son of flour merchant John Gibb Ure and his wife Agnes Ross Auld who were married in the burgh on June 5 1879 and lived at Rockbank, 40 East Clyde Street.

His father, brother of Lord Strathclyde, ran the Crown Flour Mills in Glasgow.

Ian was educated at Helensburgh’s Larchfield School and then at Loretto College in Edinburgh from 1898-1903, where he was a prefect and played rugby for the 1st XV and cricket for the 1st XI.

After leaving school he entered his father's business, and later became a partner. He married Elizabeth Winifred, a daughter of the late Mr William Auchincloss Arrol, of Torwoodhill, Rhu, a brewer.

He took a keen interest in matters connected with the Territorial Force, was a popular officer in ‘A’ Company, 9th Argyll and Sutherland Highlanders, and rose to the rank of Captain.

At the outbreak of war he was on the reserve list of officers, and afterwards joined up. He trained at Ripon, and was appointed Instructor of Musketry.

Later he was transferred to a pioneer battalion of the Argylls, which did excellent work in France, particularly at Vimy Ridge, when this important position was taken by the Canadians.

In October 1917 he was transferred to the Italian front, and just a month before his death he was awarded the Military Cross.

His colleague, Major McHaffie, tendering his sincere sympathy to his parents, said: “Captain Ure was one of my best friends.

“He was most popular with officers and men, and his company worshipped him. He was always the same, under shell fire or back in the rest. He is a great loss to the regiment.

“I was at his funeral yesterday (3rd February), and can assure you his grave will be well looked after. He was killed at once and suffered no pain.”

At the morning service in Helensburgh Congregational Church in West Princes Street the following Sunday, the Rev William Blair made reference to Captain Ure having made the supreme sacrifice, and extended the sympathy of the congregation to his young widow, his parents, and other relatives of the brave young officer.

The Helensburgh and Gareloch Times reported: “Mrs Parker presided at the organ and played the Dead March very impressively.”

Captain Ure was buried at Giavera British Cemetery. His name appears on the Hermitage Park War Memorial and the Loretto Roll of Honour. His widow died in Edinburgh on June 28 1944.

A few weeks later the family received a touching tribute from one of Captain Ure’s men, Lance Corporal John McLean.

Since I wrote last, our company suffered a severe loss, our Company Commander, Captain Ian Ure MC, being killed just a fortnight ago today.

He was a brave and fearless leader, and took a personal interest in every individual in his company.

For months I had the honour of being his orderly, when in the forward area, and during that time experienced many proofs of his fearless, gallant, nature, of which, if spared, I may have many anecdotes to relate in days to come.

Nothing distressed him more than when we suffered casualties. Time and again he helped to remove the wounded and dead. His presence was ever an inspiration.

“We are all right tonight; the captain’s with us,” was an expression I often heard.

On the road up, the night he was killed, no fewer than three dud shells landed, none of the three being more than six yards from us. The third, by the way, was a trench mortar.

“Our number’s not up yet, McLean,” was the captain’s remark when the mortar proved a dud.

That night he went out, and went over the ground on which the mines were to be placed.

When finished, he returned, met the material and wiring party, sent all but a few picked men back to billets, and himself with these few men ran out the wire. It was all completed in a few hours.

He worked that night as a man never worked in similar circumstances. There were moments of suspense, when enemy star shells shot up, and we stood still, but we were not spotted.

He always carried an old walking stick. When starting work he left it at an old tree stump, and when finished we could not just get it owing to so many stumps being much the same.

This troubled him more than all the work that went before; but we got the stick, and when dawn was creeping up in the east and the lark singing his morning welcome we reached our dug-out billets, having suffered not a single casualty.

We were proud, proud, of our dear captain. He was a man and a hero, and a more unassuming gentleman we could not meet.

Only recently he received the ribbon of the MC, and we were all so glad.

Brave noble hero, he is now away from us. Peace be with him; his memory will ever be an inspiration to us all.

We laid his mortal remains to rest in a little British cemetery under the shade of a cluster of green fir trees. In the evenings the wind soughs in sorrowing note through the thick green branches.

His country has lost an unselfish patriot.