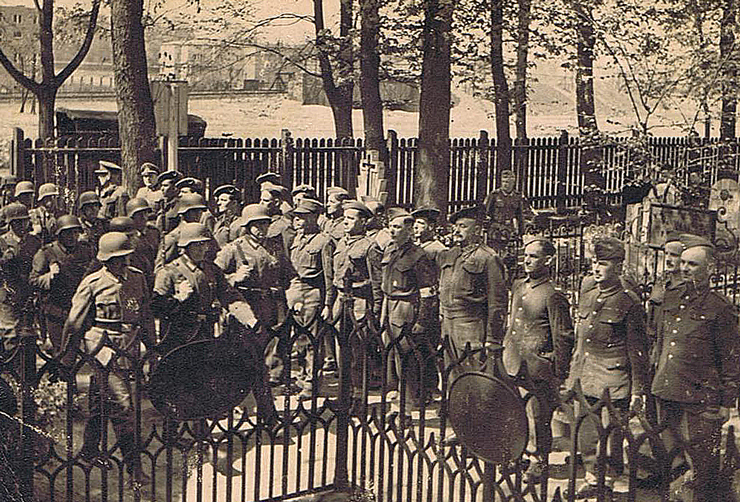 THE NAME of John Muir is now synonymous with the John Muir Way, a picturesque coast to coast walk from Helensburgh to Dunbar.

The route is named in memory and honour of Dunbar-born conservationist John Muir.

As a boy he emigrated to America in 1849 and became the father of the American National Parks and consequently an eminent figure in the conservation movement.

The picturesque 134-mile route can be completed in between seven to ten days walking, or between three and five days cycling. The start over the hills takes in the landscapes of Loch Lomond, and eventually it picks up the route of the Forth and Clyde canal.

But 76 years ago another John Muir, from Helensburgh, had a much less pleasant walk of at least 120 miles before boarding a cattle wagon packed with prisoners of war.

The previously untold story of this young man, whose parents lived at 57 West Clyde Street, has a tragic ending.

RAF Helensburgh was the official name for the Marine Aircraft Experimental Establishment, a secret wing of the RAF which tested flying boats on the Gareloch using a slipway and hangars at Rhu.

The role of Station Barrack Warden at RAF Helensburgh involved looking after the needs of men and women based in barracks, or at requisitioned premises such as Ardenvohr, Rosslea, Ardenconnel and, for the WAAFs, Shorelands.

Barrack Warden John Rathlin Muir, the son of a valet, was an ex-soldier, who served 24 years with the Seaforth Highlanders, including in  World War One.

On Christmas Eve 1915, when he was 35 and the Company Quartermaster Sergeant of the 5th Battalion of the Seaforths based at Newton Camp in Cromarty, he married a cattleman’s daughter, 20 year-old domestic servant Christina Sutherland from Corntown, Conon Bridge, at the Established Church of Scotland in Corntown.

They had four children, Christina, John Rathlin, William and Mary Berryman —named after her grandmother, all born in Ross and Cromarty. 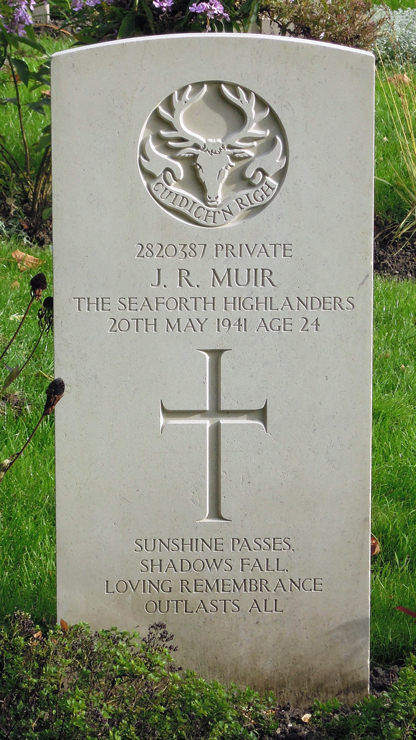 On a fateful day in July 1941 they received the sad news that their son Private John Rathlin Muir, who also served in the Seaforths, had died.

Naturally they were desperate to find out what happened to him. He had followed his father’s footsteps as a soldier and went off to fight in World War Two.

Whether they did or did not find how their son died is not known.

“All I know is that John Muir Senior received condolences and sympathy within the ranks of RAF Helensburgh as a man who helped them,” said Robin Bird.

“While the fate of his son is not essential to my story of RAF Helensburgh, I wonder through Eye on Millig if anyone knows any more about it?”

Initial research indicates that Private John Muir and the Seaforths went to France in 1940.

They were stationed in front of the Ouvrage Hackenberg fortress on the Maginot Line and escaped being encircled with the rest of the British Expeditionary Force.

While the Dunkirk evacuation took place, John and the Seaforths were attached to the French 10th Army. They were involved in heavy fighting and suffered many losses, but John survived.

When French General Marcel Ihler surrendered on June 12 1940, John along with more than 10,000 comrades became a prisoner of war.

They believed they were being marched to Germany along the route that the Germans had advanced. However this was not their real destination.

After being force marched for more than 120 miles, they were loaded into cattle wagons to be taken to their real ultimate destinations.

John’s was Stalag XX ID in Poland, where conditions were harsh. There was overcrowding, bad water supply, lice and poor accommodation.

Many prisoners died, or became ill. The arbitrary shooting of prisoners by guards was particularly bad. Other prisoners were shot trying to escape.

All that Mr and Mrs Muir, back in Helensburgh, knew was that their 24 year-old son had died while at an address given as Posen, Poland — ‘Date and cause of death unknown.’

Major General Victor Fortune, the senior British officer in captivity and a former commander of the 1st Battalion of the Seaforths, later Sir Victor, attended his military funeral in the POW Camp and is in the picture above, and he was buried in Poznan Old Garrison Cemetery 4. His name is on the Cenotaph in Hermitage Park.

Their second son William also died in Poland, at Krackow, but it is known when.

Mary, who was born in Fortrose on August 3 1920, married a Canadian, John Alan Handford, and they made their home in Red Deer, Alberta, where she died in March 1972.

Robin added: “Private Muir’s death sheds light on a little known aspect of the Dunkirk evacuation, that of the Highlanders who stayed behind.

“We may never know how Private Muir met his death, or why a Major General attended his funeral.

“At least this previously untold story records the life and sacrifice of Private John Muir, a man who Helensburgh can be proud of.” 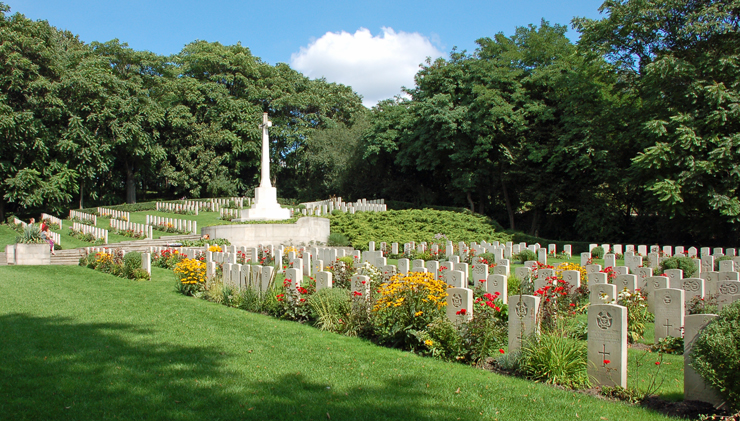