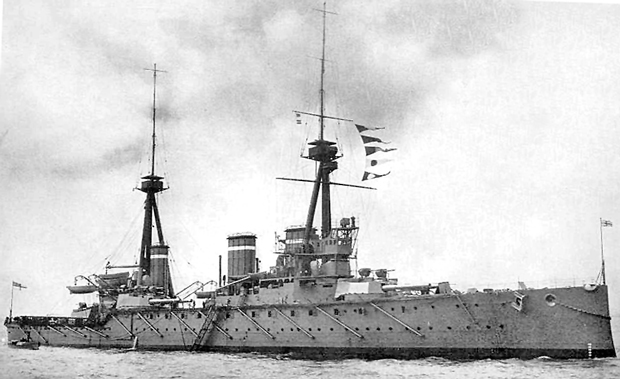 HELENSBURGH will host a major centenary commemoration of the famous World War One naval Battle of Jutland on Saturday May 14.

Now the search is on for stories of local involvement in the famous battle, and it is hoped to stage a one-day exhibition of First World War artefacts and hold a parade through the town and a drumhead service.

An organising committee has been set up, and consists of representatives from Argyll and Bute Council, the Royal Navy, the Royal British Legion, and Helensburgh Community Council.

“For example, if a ship of a certain name fought in the battle, and if there is a ship of the same name serving in the Royal Navy at present, then there would be a display of photos of both with some description.

“Although the parade and exhibition are to mark the centenary of the battle, we realise that by far and away the great majority of local people who served in the Armed Forces during the war were in the army — and so we are looking for exhibits which mark the role played by all the Armed Forces.”

The Battle of Jutland was the most significant naval engagement of the war, with over 100,000 sailors involved on 250 ships. More than 6,000 Royal Navy and 2,500 German sailors lost their lives.

Secretary of State for Culture John Whittingdale said: “The Battle of Jutland was the biggest and most brutal naval battle of the First World War, claiming the lives of thousands of men.

“For Jutland’s 100th anniversary, we want to commemorate the heroism and sacrifice of all who served. The events around the country are a chance to pay tribute to the extraordinary bravery of so many of our countrymen.”

It came about in the spring of 1916 when Admiral Reinhardt von Scheer decided that a British blockade had gone too far and was causing too much damage to Germany.

He wanted to lure out of their respective naval bases parts of the British fleet and, using a combination of submarines and surface boats, attack and destroy them.

On the night of April 24 and 25, the German Navy attacked the coastal towns of Lowestoft and Yarmouth. The idea was that the British fleet would respond to this.

In May, Scheer ordered Admiral von Hipper to sea with 40 ships to move along the Danish coast. The news of this movement reached Admiral John Jellicoe in Rosyth.

He saw this movement of such a large force as a provocative move and ordered the Grand Fleet to put to sea —  and on May 31 the Battle of Jutland started.

Finding where the enemy’s fleet was proved to be quite a difficult task. Spotter reconnaissance planes were far too unreliable to cover the distance required over the North Sea.

Therefore, fast cruisers were sent out by both fleets to discover where the other was. When both did find the other, there was a brief exchange of fire but both had done their task — hunting down the enemy.

Now that the British had found the Germans, Jellicoe was joined by the fleet based at Scapa Flow led by Sir David Beatty. Fifty-two ships joined the Grand Fleet.

Jellicoe and Beatty faced a fleet of forty German ships led by Admiral Hipper. They opened fire at one another at a distance of about ten miles.

Though they were a smaller force, the initial advantage lay with the Germans who were helped with their visibility by the position of the sun.

Just after 4pm the British battle cruiser Indefatigable was destroyed. One thousand men lost their lives when a magazine exploded. Nearly thirty minutes later, the Queen Mary was sunk in just ninety seconds.

The position of the British became more difficult when Hipper was joined by Scheer’s High Seas Fleet. Jellicoe’s force was about fifteen miles from Beatty’s force when the actual battle started.

As the two British fleets converged, the British suffered a third major loss when the Invincible (pictured above), flagship of the Third Battlecruiser Squadron, was sunk shortly after 6.30pm.

When the two fleets did join, they represented an awesome force and Hipper ordered the German fleet to sail north. Jellicoe interpreted this move as an attempt to lure the British fleet into either a submarine trap or a German mine field — or both.

So he did not follow the German fleet. He decided to sail his fleet south to cut off the Germans when they tried to sail for home.

Both fleets clashed again as the Germans sailed for port. The German ship Lutzow was sunk. Derfflinger — scuttled at Scapa Flow in 1919 and later broken up at the Shipbreaking Industries yard at Faslane — and Seydlitz were badly damaged.

The Germans claimed that Jutland was a victory for them as they had sunk more capital ships than the British. Jellicoe claimed that the victory belonged to the British as his fleet was still a seaworthy entity whereas the German High Seas fleet was not.

The British did lose more ships, but the German fleet was never again to be in a position to put to sea and challenge the Royal Navy in the North Sea.

Only limited information has been found so far about local people involved, and any help from readers would be welcomed.

The Helensburgh and Gareloch Times, a mine of information about WW1 Army matters, published surprisingly little about the naval battle.

However there was one article entitled “The Great Naval Fight — Wonderful Escape of Local Officers”.

“With the battle cruiser squadron there had gone out from the Scottish port what in the official announcement are called ‘four fast battleships’.

“The Warspite was one, and got the brunt of the first attack.

“It is said she became isolated from her consorts, got surrounded by half a dozen enemy ships, made a brilliant fight against the odds, disposed of more than one of them, and, by clever manoeuvring, showed a clean pair of heels.

“The Barham was another battleship which played a notable part in the action. Lieutenant Commander Francis Butler Tower, who was married a fortnight ago to Miss Keyden, of Row, was on board, and escaped without injury.”

Two Helensburgh and district men serving on board HMS Invincible were killed on May 31.

One was Lieutenant J.W.A.Steggall, the only son of Professor J.W.A.Steggall FRS, JP, professor of mathematics and natural philosophy at Dundee University College, of Rowmore House, Garelochhead.

He was a graduate in engineering and science from St Andrews University, and worked for a time for the Caledonian Railway and was later as a railway engineer in Brazil.

Early in the war he enlisted in the Naval Division and fought at Gallipoli, then transferred to the Navy as a naval instructor.

His mother was the sister of Sir James Frazer, the celebrated author of ‘The Golden Bough’, who lived for a time in East Argyle Street.

On July 14 his brother Lieutenant Mark Carr Hill, of the 6th Battalion of the Leicestershire Regiment, also fell in action at the Battle of the Somme, aged 22.

Another May 31 victim was 30 year-old Able Seaman John Carson, RN, who served on HMS Defence.

His family was originally from the island of Lewis, but John was born in Helensburgh on September 24 1889, the son of Matthew and Annie Carson, of 6 West Clyde Street.

Someone lucky to escape without injury was Eric Mackay RNR, son of J.B.Mackay, of Glenelg, 21 East Montrose Street. He was on board HMS Canterbury, which was raked with shell fire. Its shattered ensign was later hung in Canterbury Cathedral.

The Helensburgh and Gareloch Times did report good news of the two young men mentioned earlier.

“Lieutenant Harry Robley and Midshipman Eric Donald, of the Warspite, were in town over the weekend and looking very well after their thrilling experiences in the great naval fight.

“They were both very reticent and averse to giving any information, but their confidence in ultimate triumph was very apparent.”

HMS Warspite and HMS Barham were regular visitors to the Clyde after the war, and their officers presented a drawing of their ships to Helensburgh Lawn Tennis Club in June 1921 in gratitude for being able to use the courts.