A HELENSBURGH man was a cook on board the liner Athenia, the first ship to be torpedoed in the Second World War.

John Joseph O’Keefe survived the sinking on September 3 1939, but died later as a result of the injuries he received.

Like the Lusitania, torpedoed by a German U-Boat on May 7 1915 off the south of Ireland, with the loss of 1,195 lives, including 128 Americans and the first vessel to be torpedoed in World War One. RMS Athenia was British owned, built in a Clyde shipyard, and used in the trans-Atlantic passenger trade.

Both were torpedoed by German U-boats early in their respective wars, and at the time of their attacks, both U-boats were supposedly governed by “prize rules” that forbade attacking passenger ships. Both attacks resulted in the loss of American lives, yet the United States remained a neutral country for two more years after each of the sinkings.

John Joseph O’Keefe was born on August 12 1904 in Greenock. On Boxing Day 1929 he married his Helensburgh bride Mary Graham at St Joseph’s Church and they made their home in the town.

The couple had six children, all girls except for the sixth who was born in 1941 after his father’s death and was christened John Joseph.

He made a career in the Merchant Navy, and was the ship’s cook on the RMS Athenia. When the liner was torpedoed a stock pot poured over him, causing extensive burns from which he never fully recovered.

He was landed at Galway and spent several months in hospital before returning to the burgh where he died on December 15 1940.

Descendants say that the family had to really fight to have him recognised as being a war victim as he died over a year after the incident, and it was due to their efforts that his name appears on the Cenotaph in Hermitage Park.

On September 3 1939, the Second World War was only ten hours old, and the 13,581 ton steam turbine passenger liner Athenia, built in 1923 for the Donaldson Line, was steaming across the Atlantic bound for Montreal from Glasgow.

It was 8pm, and on smooth seas and in pleasant weather many of the adults were busy making themselves ready for dinner. Others with children were busy putting them to bed.

Many more were relaxing in the lounge listening to the ship’s orchestra, while others found walking around the deck on such a beautiful evening one of the more relaxing pastimes on such a voyage.

The Athenia was carrying 1,103 passengers, 300 of them American, and the total compliment was made up with 305 members of the crew.

At 8.40pm the U-boat U30, captained by Kapitänleutnant Fritz-Julius Lemp, spotted the lights of the Athenia against the evening sky.

The U30 increased speed, and when just about level with her prey, turned and lined up the length of the Donaldson liner in her sights and fired a single torpedo.

No-one saw the tell tale silver wash of the torpedo coming towards them that was to send the liner to the bottom.

It was 9pm when suddenly the peace of the evening was shattered by explosion and fire as the warhead of the torpedo ripped open the port side of the ship and penetrated the engine room.

There was panic and havoc as parents tried in vain to reach their berths where children had been tucked away for the night.

Many waded through water trying to find a way up on to the decks. Within 20 minutes the bulkheads gave way and water poured into the forward engine room.

More explosions could be heard, and most of the accommodation below decks was now filled with water.

The crew behaved in an orderly and very disciplined manner and it was because of their actions that many were saved.

The ship began to list heavily to port as water poured in. Even though many of the lifeboats on the port side became almost impossible to launch, the crew managed to cut the anchoring ropes and securing chains to lower the lifeboats down into the water.

Passengers were organised into groups and were told which part of the ship they should go to, where other members of the crew were waiting to help them into lifeboats. 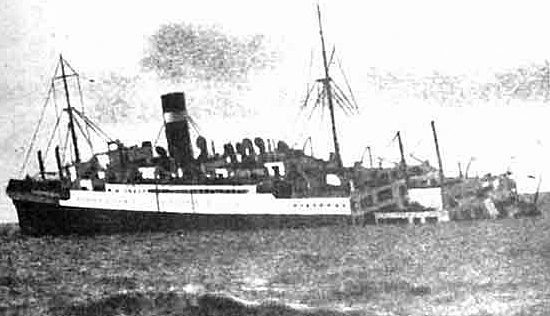 Fortunately the sea was calm and the weather good, and the liner managed to remain afloat until the next morning.

This allowed for an orderly evacuation of passengers and the first rescue ships of three merchant vessels and three British destroyers arrived soon after.

The crew managed to save nearly a thousand lives, and the loss of life was contained at only 118, 28 of them American.

Some of the deaths resulted from the Norwegian rescue ship Knut Nelson destroying a lifeboat with its propellers during the rescue.

Lemp had ordered the U30 to about turn and disappear into the darkness without rendering any assistance to survivors, leaving them on the dark ocean.

Under the terms of sea warfare, the captain was at liberty to warn and evacuate the ship before going ahead and sinking it, and his order to attack without such warning was an atrocity.

His action caused great embarrassment to Germany, who, in trying to cover themselves stated that Lemp described the Athenia to be zig-zagging and without lights — using a manoeuvre that was used by ships trying to avoid detection.

He claimed that he assumed the Athenia to be an armed merchant cruiser.

But both America and Britain accused Germany of a cover-up, stating that it would not have been possible for the Athenia to be sailing under total darkness for the safety of her passengers.

Also the Athenia had left Glasgow two days earlier and was at sea when Britain announced that war had been declared. The captain of the Athenia would have thought that as a passenger ship travelling away from Britain he would have been safe from any enemy action.

Hitler was furious, but chose to categorically deny the sinking. Berlin launched their own propaganda which blamed the Athenia’s sinking on a Royal Navy submarine.

Berlin accused London of intentionally sinking the Athenia in a plot to discredit Germany and to curry favour with the United States to join the war.

Propaganda minister Joseph Goebells was instructed to broadcast that no German U-boats were in that location during the incident and that no U-boats could have possibly torpedoed the Athenia.

When Lemp finally sailed into port on September 27, Berlin was still denying the sinking, but the entire U-boat Force already knew that he was responsible.

For his error in judgment, Lemp could be relieved from his duties or face court martial. However no action was taken because of his outstanding first patrol.

He had sunk three ships including the Athenia, destroyed two British aircraft, demonstrated humanity by fishing two British pilots from the sea and taking them to Iceland for medical care, demonstrated competency under a depth charge attack, and brought his boat home in spite of severe damage.

It was felt that to punish a gallant U-boat commander for his mistake would send a wrong message to the U-boat force, so the incident was swept under the carpet.

To prevent a repetition, Hitler placed further restrictions on U-boats, ordering that all passenger ships were not to be attacked, even if they were escorted in a convoy. But the sinking did much to create terror about U-boats prowling in the Atlantic.

It was not until January 1946 that the German authorities admitted they were responsible.

u This article proved of particular interest to Carolann Cameron, who contacted the Trust to say that John Joseph O'Keefe was her maternal grandfather.

Her late mother, Francis O'Keefe, was the third daughter of five, born on May 28 1936. She met Carolann's late father, David Robertson Cameron, who was born on March 26 1936, when they were 10, and David and his widowed mother — who also lost her seaman husband who died young — and four brothers moved from Clyde Street to the new houses in Buchanan Road in Kirkmichael.

Carolann said: "The first time my dad saw my mum he asked his friend who she was and their fate was sealed. They married eight years later aged 18 on December 31 1954 on my dad's first leave home from his national service in the Royal Artillery."