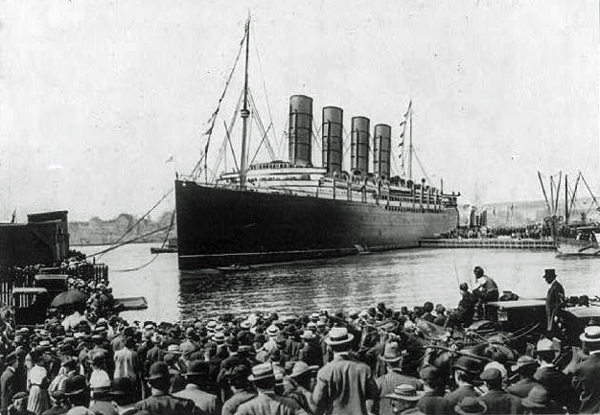 The Lusitania was torpedoed by a German U-boat on May 7 1915 off the south coast of Ireland with the loss of 1,195 lives, including 128 Americans.

The ensuing international outcry was a key factor in the United States entering the Great War. Among the American passengers who drowned was Alfred Gwynne Vanderbilt, then the richest man in the US.

The centenary of the tragedy has been marked in the past few days by a music and poetry event on board The Tall Ship at Glasgow’s Riverside Transport Museum, a conference in Clydebank Town Hall, and memorial services in Liverpool and Ireland.

In America a wreath laying ceremony was held in Battery Park in New York City, and a panel discussion about the tragedy, its legacy, and the impact of the German attack on public opinion in the US took place at the National Press Club in Washington, DC.

The 31,550-tonne luxury liner, built and launched by John Brown & Co. in Clydebank, one of a new class of large transatlantic liners built for Cunard, sailed from New York on May 1 1915 bound for Liverpool.

Prior to its departure, the Imperial German Embassy put advertisements in 50 newspapers warning passengers “a state of war exists between Germany and her allies and Great Britain and her allies” and that “passengers were sailing at their own risk”.

Yvonne McEwan, historian and director of the Edinburgh University-led project Scotland’s War, said: “Not only was the Lusitania built by Scottish men, it was staffed with Scottish men. A lot of the passengers were also Scottish or had Scottish connections.”

A spirit dealer’s labourer and later a yarn bundler, he worked at the Turkey Red Works and was one of the trainers of the Renton football team.  The couple married in 1878, and Grace was born on June 10 1890 in Renton,

In 1908, Grace’s brother Archie, then 21, moved to New York City, and Grace followed three years later. She lived at 104 Jackson Avenue in Passaic, New York, and worked in a dressmaking shop.

In 1915, as the First World War developed, she decided to return home to Scotland.

She bought a second class ticket on the Anchor Line cruise ship Cameronia, but hours before sailing, the ship was requisitioned by the British government.

She was transferred to the Lusitania, the world’s fastest and most luxurious passenger vessel, along with 40 other passengers — the last people to join the ship.

In a 1975 interview Grace claimed to be the last passenger to board, almost missing the ship, and said she later wished that she had missed it. 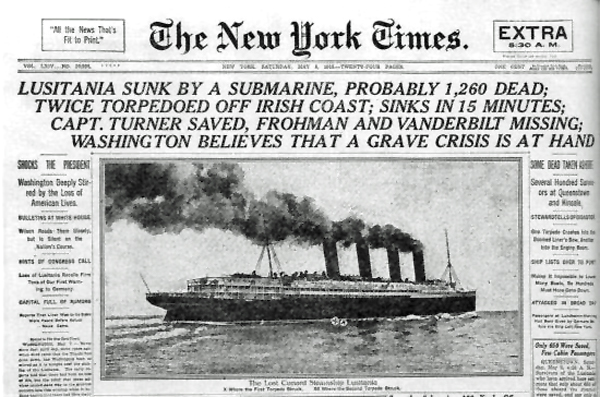 The transfers delayed the Lusitania’s departure from New York’s Pier 54 by two and a half hours. Later, scholars speculated whether the late departure played a role in the Lusitania’s crossing paths with U-20, the German submarine that sank it.

The sinking was off Kinsail on the south coast of Ireland with 1,195 men, women and children out of the 1,959 passengers and crew losing their lives.

Two inquiries were held into the loss, and both concluded that the German U-Boat U-20 was entirely to blame, although the Germans had warned Americans not to travel on ships entering the exclusion zone the Germans had declared round the British Isles.

The Germans struck a black iron medal to celebrate the sinking. Some 250,000 copies of the medal were circulated in Britain and America, and the sinking turned out to be a spectacular own goal by the Germans as it helped in persuading the USA to enter the war.

Among Grace’s acquaintances on the Lusitania was handsome medical student Richard Preston Prichard, who was on his way home from Canada.

The two met at a long table in the second class dining hall, and Grace, who was seasick throughout most of the journey, appreciated the sympathy he offered and immediately took to him.

Richard had teased Grace that she had a double on board, and they went looking for the woman. They were together when the torpedo struck.

The ship lurched hard to starboard, causing Grace to lose her footing and slide down the deck. When she looked around, she found that Richard had disappeared.

Grace decided to jump over the rail into the water and she sank deep into the sea, dragged down by the sinking ship.

Eventually she popped to the surface and clung to the body of a dead man who was wearing a life vest.

“We floated together for a while until a big wave washed him away,” she wrote later, and she was eventually rescued. However Richard’s body was never found.

Four months later Grace responded to a letter from Richard’s mother who was trying to find out more about his fate. She wrote . . .

“Received your letter this morning and on opening the leaﬂet I recognised your son in a moment. I can see his face so clearly in my mind so sunburnt and full of life and ambition.

“He kept us in good spirits relating different experiences he had during his travels and was very nice to everybody. I appreciated his efforts as I was very sick during the whole journey and he was especially nice to me.

“Well the eventful Friday arrived and in the course of conversation Mr Prichard remarked that I had a double on board and that he had spoken to this girl mistaking her for me.

“One or two of the other men at the table it seems did the same thing, so Mr Prichard volunteered to point her out to me after lunch. We went up on deck and were looking around when the awful crash came.

“The ship listed so much that we all scrambled down the deck and for a moment everything was in confusion. When I came to myself again I glanced around but could ﬁnd no trace of Mr Prichard. He seemed to have disappeared.

“I ran around the deck looking for a lifebelt but could not get one. I then ran along to the ﬁrst class deck to try the lifeboats there when the second torpedo struck.

“I felt all hope was gone as she was sinking so rapidly, so took off my heavy coat and climbed over the rail and jumped into the water with the hope of catching hold of a piece of wreckage.

“The suction pulled me down and I felt that I was going to my death but fortune came my way and I rose to the surface, this time caught a small piece of wood and ﬂoated with it until I was picked up by a collapsible lifeboat and eight hours after was landed at Queenstown.

“On Saturday morning I made inquiries regarding Mr Prichard but could not gain any news of him at all. I had the hope that perhaps he had been saved and brought to some other place.

“You have my heartfelt sympathy in your sorrow — those who had loved ones on board the Lusitania will never forget it. Time alone will efface the horror of the cruel deed.”

In 1926, Grace received compensation from Cunard for the loss of her belongings.

She settled in Renton and became known throughout the district for the millinery and dressmaking shop which she ran with older sister Annie. She had three other married sisters living in the Renton area, but Archie remained in New York until his death in 1942.

After her voyage on the ill-fated liner, she never returned to the United States.

In 1960 Grace moved to 3 Steele Walk in Balloch, and she and Annie continued to run their dressmaking shop until Annie’s death in 1974.

The following year Grace moved to the Church of Scotland’s Clydeview Eventide Home overlooking East King Street Park in Helensburgh, where she lived for the last ten years of her life.

She died in February 1986, aged 95, and a tribute said that she would be remembered as a ‘marvellous personality’ who was regarded with great affection by everyone who knew her.