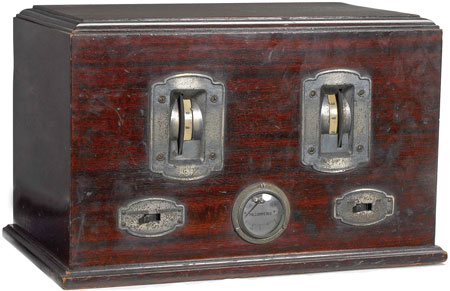 ONE of the earliest receivers for Helensburgh inventor John Logie Baird's Television Company sold at Bonhams in Knightsbridge, London, on Tuesday November 18 2008 for £12,000 … four times more than its pre-sale estimate.

The rare wireless, which was able to receive some of the world's first television programmes, was bought by the National Museum of Scotland.

Alison Taubman, principal curator of communications for the National Museum of Scotland, said after the auction: “We are delighted to have acquired the type A receiver as very few are left in existence. This is an important addition to an already significant collection of Baird material.”

John Logie Baird was the inventor of the world's first working television system. The Baird Televisor, which was the earliest television set to go into production, had no internal receiver and so relied on its connection to a wireless in order to retrieve the Baird Television Company signal.

It is not known how many of these Televisor wireless receivers were made, but the number is under 100 and this set is the only known example to appear at auction.

The rare wireless, marketed by the Baird Television Company to receive the Televisor signal, was manufactured between 1929 and1934.

It has twin drum tuning scales, central current dial flanking the horizontal-plane switches for On/Off and Loudspeaker/Televisor, each with large nickel plated impressed metal escutcheons, and twin tap bars for Televisor and loudspeaker connections at the rear.

The colour ‘Baird Television — The Eye of the World’ company transfer and valve plaque is on the back panel with heat apertures to top.

Considering that the price of the best-value Televisor (Baird Model A) in 1928 was £20 and the most wallet-lightening model (Baird Model C) also from 1928 for sale at £150, purchasers would have been not too willing to invest in these specially made Baird wireless receivers, as in most cases their homemade or basic shop-bought wireless would do the same job just as well.

Nevertheless, the Baird Television Company made a few of these sets and tried to offer them as worthwhile accessories to gather more revenue.

Sold separately, this receiver would have been perfect for use with the Daily Express mechanical Televisor kit offer, which sold for £5 9s 6d in 1934.

This original and totally unrestored set comprises the four valve line-up and the transformer tapped at 220v. The first time 30-line signals for both sound and vision transmitted together, was in March 1931 from Brookman's Park (vision 261 metres and sound 365-6 metres).

The circuit in this receiver features separate sound and vision tuning as well as the band filters, prior to the neon input, making line synchronisation reliant just on the Nipkow disc speed control on the Televisor.

This set is the only known example to appear on the open market, and successful attempts have been made by dedicated narrow band-width societies the world over to create reproductions using modern components and going from period photographs and diagrams.

This very scarce set provides an opportunity to see how the original components made this important task possible, and strengthens the development and subsequent conservation of early television technology.