I have been re-examining  the colourful story of John Logie Baird’s jam factory in Trinidad in 1919-1920. It has appeared in his own memoirs [1] and in later biographies [2,3]. 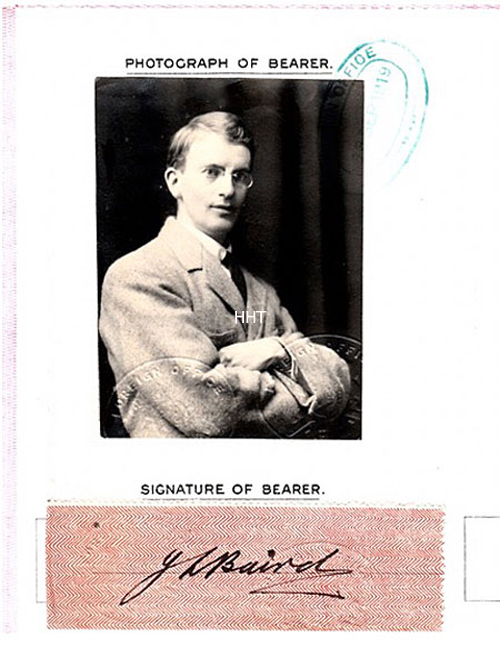 Before leaving Scotland he obtained a British passport dated 18 September 1919; see his picture and signature on the right.

New information has recently come up about his outwards trip in 1919, over 100 years ago. JLB suffered from bad colds and breathing problems while running his “Baird Undersock” business in Glasgow. He was persuaded to move to Trinidad by Godfrey Harris who had been his neighbour in Helensburgh and a fellow-student in Glasgow before the war.

]Harris had moved to New York and he sent glowing accounts of the business opportunities in Trinidad. Jam could be made from the abundant and cheap fruit and shipped to Britain where it was in short supply and very highly priced in the shops.

Here is an extract taken from p.33 of JLB’s published memoirs [1]: “I was full of optimism and I set out blithely for the West Indies, taking a cheap passage in a cargo boat so as to keep as much as possible of my capital intact ... I arrived in Port of Spain after three very unpleasant weeks in a heaving cargo boat.”

This was not the whole story. According to my mother’s memoirs [2], in about 1917 JLB had met a girl to whom he became deeply attached.

“His health was so poor that marriage was out of the question, and one of the reasons for going to Trinidad was that a warm climate might cure him. What he hoped for was a return to Glasgow with his health restored and his position in business assured. He came back with neither and found that while he was away the girl had married.”

JLB’s outward travel arrangements in 1919 were somewhat confused. Having obtained his passport on September 18, he booked passage on the liner “Columbia” due to sail from Glasgow to New York on November 22. He may have intended to meet Godfrey Harris in New York before travelling on to Trinidad.

However, JLB suddenly cancelled his booking on the “Columbia” and instead sailed on the freighter “Novian” (6368 tons) departing from Liverpool on November 27 to various ports in what was then called the British West Indies. This was the “heaving cargo boat” referred to in his memoirs above.

The reason for JLB’s abrupt change of booking is not known. It could be that his arrangement to meet Harris in New York fell through at the last minute, or it could simply be the financial saving on the fare. Last but not least was the possibility that JLB had a sudden health problem, such as a chill, and was forced to change his booking at short notice. 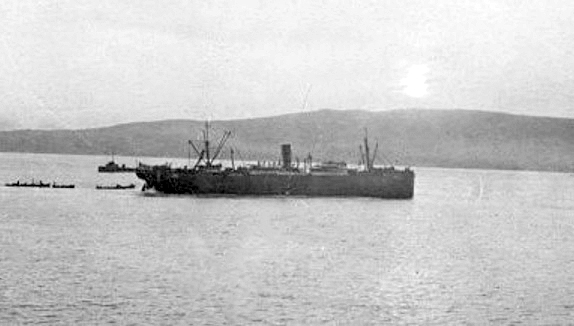 The “Novian” on April 25 1915 is shown on the right (photo courtesy Australian War Memorial).

It had been built in Glasgow (D.& H.Henderson) in 1914 for the Leyland Line which ran a freighter service between London, Liverpool and the Caribbean. There were 11 passengers on the manifest and the conditions were spartan compared to those on the “Columbia” which had full lounge and dining facilities and a capacity of 1,300 passengers.

It is believed the “Novian” docked in Port of Spain in mid-December 1919. Earlier in the month there had been serious riots in Trinidad and Tobago, arising from trouble with the stevedores at Port of Spain. At the Governor’s request a troop of marines was landed from a British ship to quell the unrest and there had been two fatalities.

This was reported in The Times of December 15 1919 but it was not mentioned in JLB’s memoirs. His scribbled notes show that he was obsessed with the business at hand, namely jam-making. There is nothing in his notes to support a recent claim [5] that he developed television while he was in Trinidad.

I am very grateful to Donald McLean for providing details of JLB’s cancellation of his “Columbia” booking and his booking on the “Novian”.

[4] Malcolm Baird, "Alice, Who art Thou? An old mystery", https://www.bairdtelevision.com/alice-who-art-thou-an-old-mystery.html