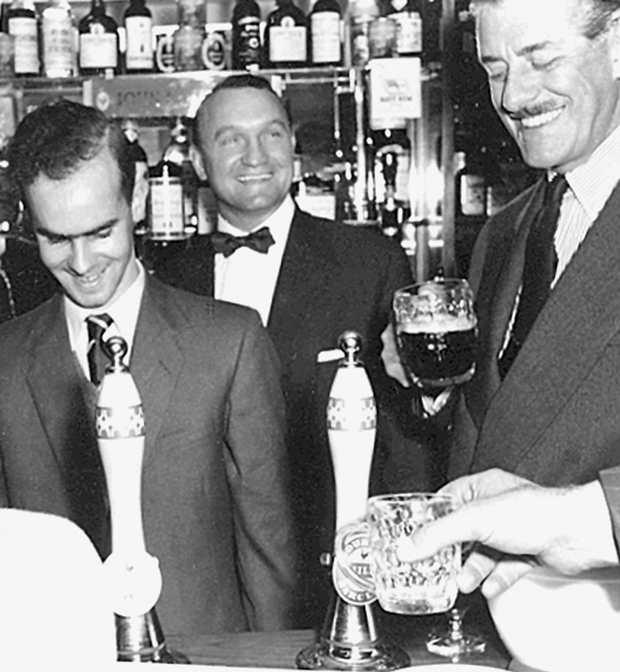 Between 1906 and 1913 my father was a student at the Royal Technical College in Glasgow. He neither drank nor smoked as a young man, since he had suffered a near-fatal illness when he was a baby and he had what was known as a "weak constitution". In any case, drink played a smaller part in the Scottish student culture than it does now; there were no bars in the college buildings.

In 1926, soon after the first breakthrough with television, a public company called Television Limited was formed with my father as managing director. The company office was at Motograph House in St Martin's Lane in the theatrical district of London, just round the corner from the famous Ivy Restaurant which was — and still is — a favourite in theatrical circles.

It was here that my father and Captain Oliver Hutchinson, the manager of the company, first tasted the delights of high living. My father takes up the story in his memoirs which were published in 2004 as "Television and Me".

Hutchey and I lunched together; it was the high spot of the day. Commencing with cocktails we went through hors d'oeuvres, rich pea soup, fritto misto, curried chicken and Bombe Gladys Cooper, washed down with copious draughts of Chateau Y'quem, followed by coffee and petits-fours washed down with Bisque d'Bouche Brandy.

Gorged and bloated and belching, we tottered over to Motograph House and awaited afternoon tea. Those were the days!

But they were too good to last. The cold weather arrived and I caught my usual winter chill, but this time it was complicated by liver and other disorders. I did not throw it off properly. Alarming symptoms developed, my nose swelled to twice its normal size and became a vivid crimson, and I suffered from acute catarrh.

I consulted a specialist and was warned to avoid in future all wine and rich food. The Ivy days were over.

By the time I remember my father, in the 1940s, he was still on an austere diet which consisted mainly of dry rusks, steamed fish, and fresh fruit whenever it could be obtained. His drink of choice was soda (carbonated) water from heavy glass bottles known as 'soda water siphons', which could be refilled at the local chemist for a shilling or so.

In spite of my father's rather limited connections with alcohol, several public houses have carried his name. In chronological order of opening, these were: The John Baird in Muswell Hill, North London, the John Logie Baird in Hastings and two pubs called The Logie Baird; one in Edinburgh and one in Helensburgh.

I vividly remember the opening of the The John Baird by the Courage group in September 1959 as I was invited to the opening ceremony to 'pull the first pint' of draft beer.

I did not have far to travel as I was working in Cambridge as a research student at the time. The picture above shows me rather inexpertly pulling a pint; behind me is the licensee, the retired boxer Wally Pack. On the right is the debonair Leslie Mitchell who had been the BBC's first full-time male television announcer in 1936.

Today, the only remaining Logie Baird pub is the one in Hastings. The one in Helensburgh had opened in 2007 in the former La Scala cinema which dated back to 1913. The old building on James Street had been completely renovated at a cost of ₤800,000. Sadly, the Logie Baird was closed in 2019 after problems with customer rowdyism. At the time of writing, the future of the building is uncertain.