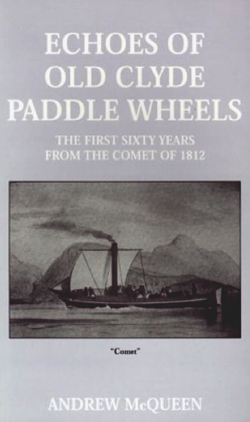 THE debate on Henry Bell's claim to fame is mentioned in a book entitled 'Echoes of Old Clyde Paddle Wheels' by Andrew McQueen, first published in 1924 although there may have been more recent editions.

One chapter deals with the early history of steam ships, and here is what Andrew McQueen has to say: "All European steamships trace their descent from Henry Bell's Comet as their common ancestor. Nevertheless it is a mistake, though a common one, to describe Bell as the inventor of the Steamboat.

"Steamboats were in existence long before the Comet appeared, and all that can be claimed for her is that she was the first steamer in Europe to ply regularly with passengers and to sail in open waters.

"It is not possible to say with exactitude who the inventor was, for the Steamboat was rather a growth than an invention; the process was a very gradual one, but even so long ago as the 16th century men were exercising their ingenuity over the question of propelling vessels by steam."

McQueen then goes on to claim that a Frenchman, Denis Papin, was probably constructor of the first actual steamboat which sailed in 1707 on the river Fulda from Cassel to Munden. However the boatmen on the river attacked him viciously because they were frightened of the effect that the steamship might have on their trade.

He then states that the first commercial steamship was undoubtedly that of John Fitch which was placed on the Delaware in 1790. It was called quite simply "The Steamboat" because there was no other in the world!

It was propelled by three or four broad-bladed oars at the stern, worked by an engine. However it was found to be unreliable, and lenders were wary of giving Fitch further money.

At the same time as Fitch made his introduction in the United States, Patrick Miller and William Symington here in Scotland were experimenting firstly on Dalswinton Loch, and then later on the Forth and Clyde Canal in 1802 with the Charlotte Dundas.

About 25 years ago my children had school friends who were Symingtons, and they were here for a few years from Australia because their father — a surgeon — was a direct descendant of William Symington and was doing a bit of research into him. The Charlotte Dundas was abandoned because the canal owners were worried that its wake might damage the canal banks.

While the Charlotte Dundas was running, Symington received a visit from an American called Robert Fulton who showed great interest in the vessel.

In 1807 Fulton put a steamboat called the Catherine — but better known as the Clermont — on the Hudson between New York and Albany. Initially the results were not encouraging, but he persevered and made her a commercial success. Steamboats proliferated on American rivers thereafter.