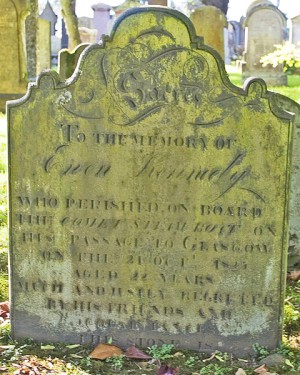 THE second Comet was built at Dumbarton in 1821, and maintained the West Highland service for four years.

When the Caledonian Canal was opened in 1822 she extended her journey as far north as Inverness, and it was when returning from that place on the evening of October 21, 1825 that she came to an untimely and disastrous end.

It was about midnight, the sea was smooth, and the Comet was off Kempoch Point, between the Cloch Lighthouse and Gourock, when, without warning, the steamer Ayr, coming down the firth, crashed into her.

In three minutes she sank, going down in 53 feet of water 165 yards from the shore with no fewer than 70 passengers, only 13 being saved, of whom seven belonged to the vessel and three were women. Only one cabin passenger was saved.

The disaster was caused by the failure of the doomed vessel to carry a light, and its magnitude was increased by the fact that the Ayr steamed away, leaving the victims to their fate.

“The seaman’s stout heart trembles, and his eye

Scans the dark waters for some succour nigh,

But scans them vainly. The unpitying prow

That in the darkness struck the fatal blow,

Deaf to the cries that mingle with the blast,

Leaves him a victim on the waters cast.”

Great consternation prevailed on the Ayr as well as on the Comet, and it was fear that the vessel was sinking which induced the crew to act in such a cowardly manner.

Two seamen belonging to the Harmony, but who happened to be aboard the Ayr, alone escaped the general stupefaction, and with the promptitude and intrepidity of British sailors, prepared to launch the boat.

Unhappily their humanitarian zeal was foiled. The moment the boat had reached the water with one of them in it, and before the tackling could be unloosed, the engine began to work, and boat and man were nearly lost.

Thus the Ayr steamed away to Greenock with the death-shrieks of her victims ringing in the ears of those aboard.

Some of the bodies recovered were battered and disfigured as if they had been struck by the Ayr’s paddles as she steamed over the spot where they had been engulfed.

The master and pilot of the Ayr were afterwards brought to trial — the former being sentenced to three months’ imprisonment and the latter being acquitted.

Many pathetic scenes took place as the steamer went down.

Among the passengers were a newly-married pair, Captain Wemyss Erskine Sutherland and his wife. When the vessel was seen to be sinking, the husband took his wife in his arms and sprang into the sea. But, though he was a strong swimmer, he did not reach the shore.

It was certainly an appalling catastrophe, and Bell never recovered from the shock.

The Comet was afterwards raised, the engines were taken out of her, and as a sailing craft she was engaged in the coasting trade till 1876.