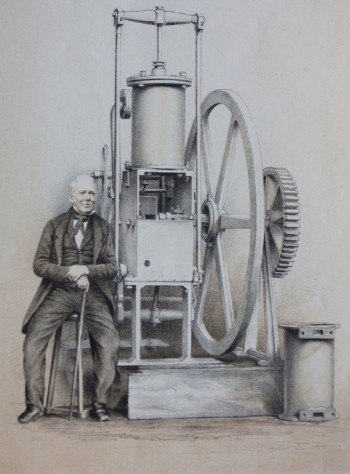 IT is now some 192 years since the wreck of the first River Clyde paddle steamer, the PS Comet, which was lost on Loch Craignish, on December 13 1820.

Since that time there have been a number of articles written and published about the history of the Comet, her loss, and the salvage attempts made at Craignish. There does, however, seem to be some doubt about exactly what engine was fitted in the Comet at the time of her wreck, and whether or not her engine was salvaged.

It is known that about two months after her first sailing in August 1812, John Robertson supplied and fitted the Come engine with a larger bore cylinder.

The increased power thus achieved could have resulted in this being called another engine, as in W.J. Millar’s 1888 book ‘The Clyde from its source to the sea’, and in the ‘Transactions of the Institution of Engineers and Shipbuilders in Scotland’.

John Robertson himself, the builder of the Comet’s first engine, in an interview with the historian, John Buchanan in 1853, along with several authors, all claimed that the original engine was removed, and another engine installed in 1819.

The new engine was said to be made by Thomas Hardy, was more powerful, and was fitted when she was being lengthened on the shore at Helensburgh, prior to her serving on the Glasgow Fort William route.

It was reported that when she was wrecked on the rocks in Loch Craignish she had broken in two, and that attempts were made to salvage some of the machinery. Some reports claimed that the engine was salvaged from the wreck, while other records would suggest that attempts to salvage it were unsuccessful.

The main area of doubt is whether the complete engine was, or was not, salvaged.

There are mentions of the salvaged engine being on display in Glasgow in 1840 and again in 1855, but in the records of the Transactions of the Institution of Engineers and Shipbuilders in Scotland there is some doubt cast as to what engine was actually displayed.

It should be remembered that the wreck occurred in winter, in stormy weather, in a very remote part of the Scottish West Coast, and even today to reach Craignish Point requires a walk of nearly one and a half miles from the car park, over rough terrain.

John Robertson died in November 1868, aged 85. He does not seem to have made any comments, which would mean that the engine on display was, in fact, his, original engine, not the engine from the wreck.

It should also be noted that, if Hardy’s engine was salvaged, while the original engine was still in existence, there should have been reports of two different engines appearing from time to time. Only in the 1880-81 ‘Transactions of the I.E.S.S.’, does there seem to be any reports of another Comet engine, and it is likely that the other engine referred to is the engine salvaged from the Comet II, lost in 1825.

It is known that the Comet II was salvaged and brought to the beach after her sinking off Kempock Point in October 1825, so it is certain that her engine was salvaged. This engine was on display in Kelvingrove Park in 1912, and recently in the Scottish Maritime Museum at Braehead.

Dr Martin Bellamy of the Glasgow Museums has done a good amount of research on early Clyde steamers, particularly the Comet, and had suggested that it was possible that there never was a second engine installed in her in 1819.

John C.Robinson of the London Science Museum, has also researched the Comet history, and has concluded that the engine was indeed salvaged from the wreck, after which it came into the possession of various people, eventually being given to the London Museum by Robert Napier, where it now resides.

If he is correct in this, it would mean that the Comet never had the engine replaced when she was being lengthened on the shore at Helensburgh, and that she was wrecked still with Robertson’s original engine aboard.

Considering the information which can be found about the Comet history, there seems to be only one conclusion which can be reached — that is a second engine was in fact installed in 1819 at Helensburgh, but this complete engine was never salvaged from the wreck.

Vain attempts by the ship’s captain, Captain Robert Bain, to salvage the engine, were unsuccessful.

One of the items in Captain Bain’s records for Christmas Day, December 25 1825, states that two large boats were employed for three days trying to get up the engines, etc. It is my belief that if he had been successful in salvaging the engine, this would have been recorded by him.

W.C.Maughan’s 'The Annals of Garelochside' of 1897, and the John Buchanan 1853 interview with Robertson, also record that, after removal in 1819, the original engine was given to Messrs Arch. McLellan & Son, Coachbuilders, Glasgow.

It is recorded that McLellan & Son sold the engine to John Robertson, who installed it in the works of W.Alexander, a Greenock distillers. From Greenock the engine went to Messrs Claud Girdwood Co., Engineers, Glasgow, under the auspices of their manager, Mr Atherton, who hoped the engine could be preserved for posterity.

About 1837 Girdwood’s closed down, and it appears that the engine became the property of the engineer John Bourne.

When the engine was exhibited in 1855 at the Glasgow Polytechnic in Argyle Street, the building caught fire and was completely destroyed. In the fire the Comet engine fell through the floor and landed below with all the other debris.

After some further changes of ownership the engine eventually came into the hands of Robert Napier, and thence it went to London where it now remains.

From time to time various illustrations of what is said to be the engine of the Comet have been published, but these show variations which can cause some doubt.

The best known picture is of the original Comet engine with its designer and builder, John Robertson, seated beside it, prior to it going to London (above). This shows the flywheel and spur gear mounted on the starboard side the towards the rear, the cylinder being at the rear of the engine.

The flywheel in this picture is the second one to be fitted, and the original flywheel is still on display on Helensburgh's East Bay seafront.

Other pictures show the flywheel on the port side, or located at the front end of the engine. The varying arrangements for the flywheel and spur gear I assume were necessary to accommodate the different requirements needed when the engine was used for different applications.