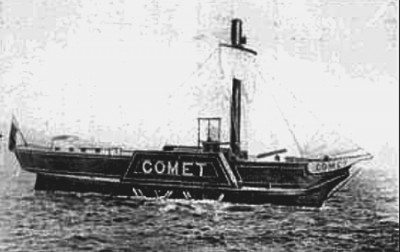 WHEN Henry Bell’s steamboat Comet started its career, it introduced the pleasure of spending a day at a seaside resort to Glasgow’s teeming population, eager for a breath of salt water air.

But some thought it was the Devil's work.

Henry Bell, born in 1767, after serving his apprenticeship, was employed at the Carron Ironworks where William Symington, who had invented a steam engine, was building his engines.

It is said that Bell was thrown out of the works for espionage, but that is doubtful.

He began to devise a different type of engine, bearing no resemblance to any other. He appears to have been doubtful of success, for he went to London and served under Rennie as a civil engineer.

But he never forsook his ambition of inventing a steamboat and, by making experiments, he at last realised it in 1800.

He approached the Admiralty, but they turned his plan down despite Lord Nelson’s endorsement.

Disappointed, Bell came with his wife to Helensburgh in 1807, and built the Baths (now Queen’s Hotel). But the idea of launching a steamer was not forgotten.

He was not a rich man, and never got the financial assistance that others had received. His gifted wife, however, came to the rescue.

We might here consider her as partner and colleague, not only in managing the hotel, but also in launching the Comet.

She never wavered as she saw how her earnings were being poured into Bell’s mysterious enterprise. She comforted and encouraged him during his difficulties as a staunch and loyal companion.

Such women are seldom known beyond the confines of their relatives.

It is delightful to learn that his devotion equalled hers and how she put at the disposal of her husband an absolute belief in the project that was vital to him — his Comet.

We do well to pay belated honour to such a remarkable woman of indomitable will, and that her husband’s genius found in her what he most required.

We do well to linger over her struggles, so silently borne.

She survived her husband by 26 years, dying at the ripe age of 86, loved and mourned by a wide circle of clients, who had savoured of her gracious hospitality in the hotel.

Thus, in Helensburgh, the genius of Henry Bell blossomed, and his steamboat was to make history.

The person after whom the town was named, Sir James Colquhoun’s wife Lady Helen, from the pier of Helen’s Burgh, launched the maiden voyage of our first steamship the Comet, so it is high time that her name should adorn the pages of classic history!

We need not here rehearse technical details which may be found on any book on the subject, further than to say that the boat was of 30 tons, the engine of 3 horse power, the cost £168, and the boiler £27.

Her tall funnel, pouring forth black smoke, was regarded as the work of the Devil.

Seamen regarded her with awe, and the minds of simple folk were so perturbed that they thronged the kirk to be delivered from this demon who defined the wind and tides.

Yet she was the product of a master-mind using the progress of science. The novelty was as plan as that, and to believe anything else seems an impertinent questioning of destiny.

So it was fitting that she should be christened Comet, like a meteor flashing across the sky she blazed the charts of future navigation.

Writing about Henry Bell, we do not only have in mind his career, for he was a well-educated man, but we include his Period.

His name implies an Age rather than the mere mention of a date can convey, everything of which he did.

That genius is not a matter of birth, and does not require that perseverance and discipline of surmounting obstacles is epitomised by Bell’s experience. His satisfaction was to achieve in what he ventured alone.

Oh why did we allow the engines of Comet I and II to leave Helensburgh and be treasured in a London museum?