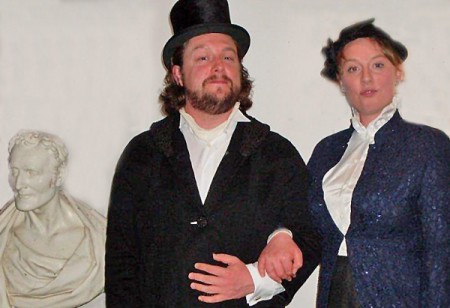 "This Is Your Life" used to be one of the most popular programmes on television, featuring well-known personalities.

The programme was revived in Helensburgh on Thursday August 23, but with two major differences: firstly, it took the form of a play rather than a TV programme; and secondly, the subjects of the play had been dead for many years . . .

Dave Dewar from Kilmun had not only written "An Evening with Mr and Mrs Bell" but he also played the part of the interviewer himself.

The Mr and Mrs Bell were none other than Henry Bell and his wife Margaret, and their parts were played by Paul Kozinski and Janis Marshall.

Musical accompaniment came from Alan Reid, who had not only written most of the songs himself, but also played a number of smaller parts in the play.

A sellout audience of 35 people came in to the Heritage Centre in Helensburgh Library in West King Street and were treated to an hour's most enjoyable entertainment.

In parts there was comedy, but tragedy was never forgotten, particularly the death of some 60 passengers when the second Comet sank.

Furthermore, it was notably of historical accuracy. The musical interludes kept the pace of the evening going along nicely as well.

The play had been performed the previous evening as well, in Dunoon Library, and in the morning a very different audience of pupils from St Joseph's Primary School in Helensburgh also enjoyed it.

Dave Dewar's play formed part of the Comet 2012 bicentenary celebrations, and the production was paid for by the Culture and Libraries Department of Argyll and Bute Council.