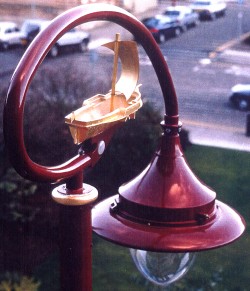 THE future of the much-admired Comet street lamps in Helensburgh’s Colquhoun Square is in doubt because of the Argyll and Bute Council plan to radically alter the square.

The changes are part of the CHORD — Campbeltown, Helensburgh, Oban, Rothesay, Dunoon — project, which also involves alterations to the seafront.

A final decision on the form of the Colquhoun Square element of the project has now been taken, and it means that the iconic maroon Comet lamp standards, an idea which came from Provost Billy Petrie, will be removed — a decision taken in the year of the Comet bicentenary, as towns around the Clyde celebrated the little steamship run by Helensburgh’s first Provost, Henry Bell.

The council will decide the fate of the lamps, and they are believed to be considering incorporating them in the design for the new council offices to be built beside the former Clyde Community Centre on the east seafront.

The former Centre, which is unoccupied and in a poor state of repair, is also to be refurbished as a combined council and community facility, and connected to the new offices. Both buildings are to have significant heritage input in the design.

Local man Tony Dance is anxious that they should be saved and used elsewhere. He said: “These 24 beautiful columns topped with a lantern and Comet model are not very old and still in remarkable condition, although the Comets will require much restoration work.

“These features cost £14,000 each when they were installed, and with their cast bases and Comet models I believe they are significant heritage items in their own right and well worth preserving.”